Developer turning two industrial buildings at north edge of Bay View into apartment complex with up to 300 units. 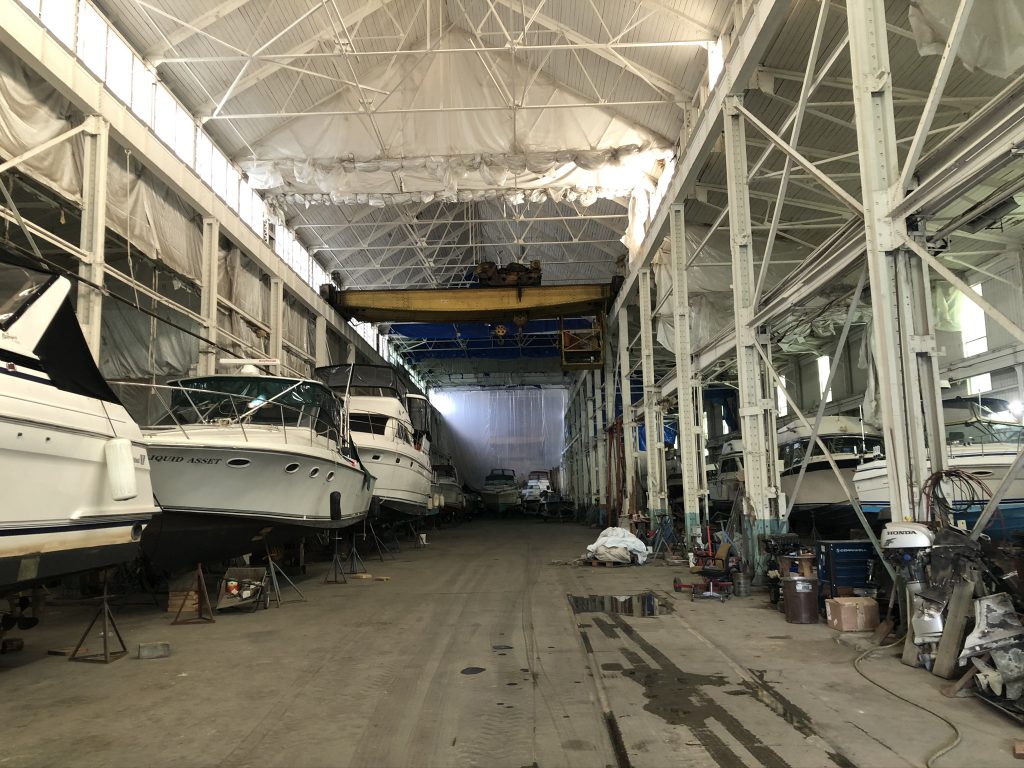 The eastern manufacturing building at the Filer & Stowell complex is now used for boat storage by Southwind Marine. Photo by Jeramey Jannene.

Bear Development is proceeding with the redevelopment of a large industrial complex in Milwaukee’s Harbor District.

Bear first revealed plans in fall 2020 to convert the approximately 10-acre complex, last used by Southwind Marine, into an up-to 300-unit apartment complex that would include a mix of affordable and market-rate housing.

The company secured a zoning change in November 2020 to enable development of the property, and an adjoining former railroad corridor at 123-127 E. Becher St., for housing apartments. The change was supported by area Alderwoman Marina Dimitrijevic, who represents the Bay View neighborhood to the south and the southern portion of the Harbor District in which the site is included.

Based on the names listed in the building permits and a 1910 Sanborn fire insurance map of the site, the first phase of the redevelopment would be focused on the eastern edge of the site. The eastern side of the site was most recently used for boat storage.

Get a daily rundown of the top stories on Urban Milwaukee
The complex was built in phases starting in 1890 for Filer & Stowell, a manufacturer of sawmill equipment. Property owner Brian Read, whose grandfather acquired and ran the company many decades ago, operates Southwind Marine and until 2017, operated Intergrated Tool & Machine. During a 2020 tour, Read said that Integrated made parts for Siemens and replacement parts for Filer & Stowell equipment from a machine shop that is the largest building in the complex, a 1,200-foot-long structure on the western edge of the property.

Most of the buildings in the complex are made of Cream City brick, but the larger buildings are clad in metal paneling. Bear’s 2020 plans called for using the western railroad corridor and other open space for surface parking while creating an interior courtyard space between the buildings.

The financing for the proposal would rely in part on historic preservation tax credits. In exchange for maintaining the historical integrity of the complex as part of a redevelopment, the combined state and federal credits offset up to 40% of the cost of rehabilitation work. That would include removing the metal paneling and restoring windows, doors and other fixtures.

Bear has a purchase option to acquire the site from Read, but state records do not indicate that transaction has closed. Read, in 2020, told Urban Milwaukee he was working on a machine that could cut trees with nails embedded in them and that was why so many tree trunks were piled up on the property. In recent weeks those trunks have been milled into a large pile near the property’s Lincoln Avenue entrance.

An auction is pending for much of Integrated’s (and Filer & Stowell’s) equipment.

Engberg Anderson Architects is leading the design work on the redevelopment project. According to the building permits, Construction Management Associates will serve as the general contractor.

Mills did not respond to a request for comment by the time of publication.

The area around the Filer & Stowell site has seen a substantial amount of development activity in recent years, led by Michels Corp’s $100 million River One development to the west. To the east, the owners of Wheel & Sprocket bought and completed redevelopment last spring of a former Filer & Stowell machine shop, 187 E. Becher St., which now serves as headquarters for the company, office space for other tenants and a bicycle shop. Also just to the east is the Stitchweld apartment complex, completed in 2017. The MKE Urban Stables project at 143 E. Lincoln Ave., just south of the Filer site, celebrated its opening earlier this year.