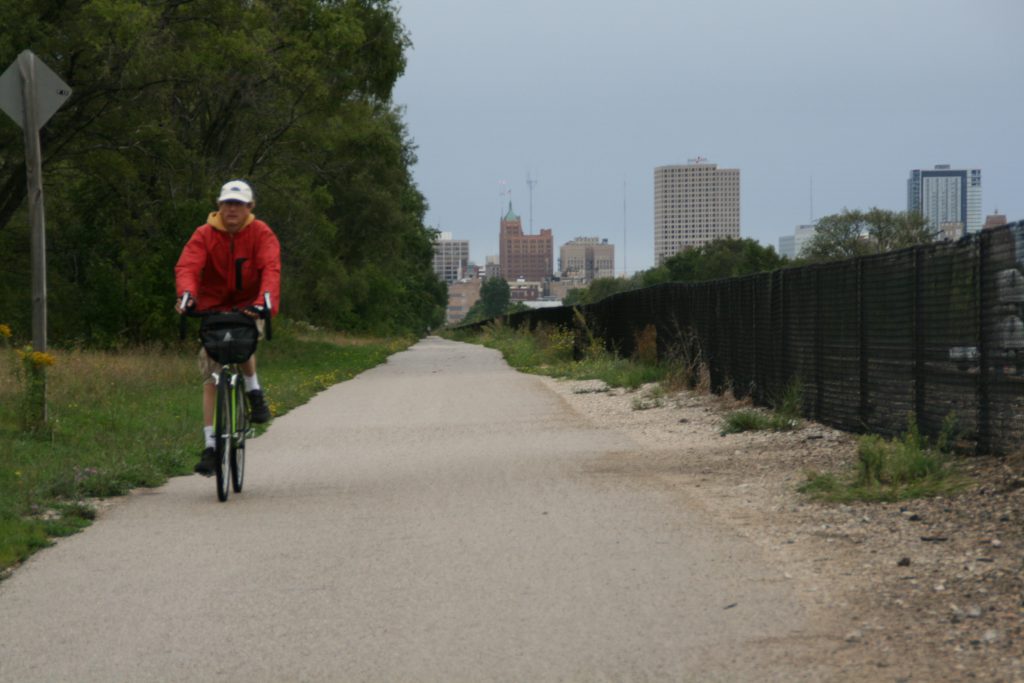 A bicyclist on the Kinnickinnic River Trail. Photo by Jeramey Jannene.

The City of Milwaukee will leverage a federal grant to improve access to the 2.3-mile Kinnickinnic River Trail which connects the Harbor District, Walker’s Point, Bay View and Polonia.

“This project is looking to make better on-street connections to the off-street trail sections so that people of all abilities can comfortably ride the entire segment and not have to mix with high-speed traffic while they’re on the streets,” said Department of Public Works multi-modal planning manager Michael Amsden in a presentation before the Common Council’s Public Works Committee on Wednesday.

Bicycle facilities will be added to the S. 16th St. bridge over the Kinnickinnic River near W. Harrison Avenue, according to a city report.

The off-road portion of the trail currently ends at S. 6th St., but a newly-created corridor is available following the Kinnickinnic River to the west because of flood abatement projects conducted by the Milwaukee Metropolitan Sewerage District. Modrzejewski Playfield, situated in the middle of that corridor, is getting an overhaul through a separate federal grant. An extension of the trail through the corridor has been planned since at least 2017 and is included in the Route of the Badger trail plan. 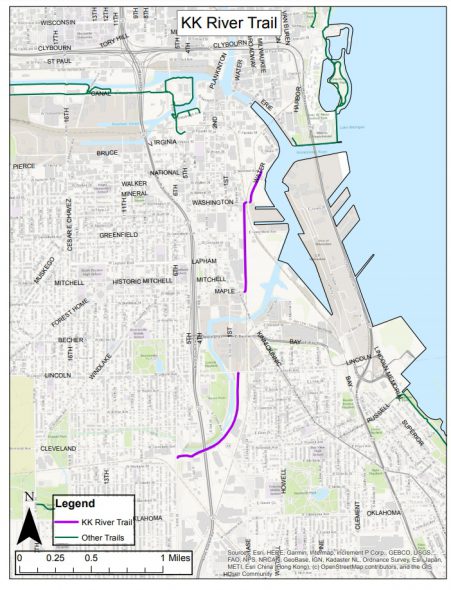 Kinnickinnic River Trail map. Image from the City of Milwaukee.

The federal government, through a Congestion Mitigation and Air Quality (CMAQ) grant passed through the Wisconsin Department of Transportation, will pay for 80 percent of the project’s costs. The project’s total budget is $1,199,780.

A second $1,180,000 project would be similarly funded and aims to improve pedestrian safety along two heavily-used transit corridors. Improvements could include curb extensions, bus bulbs, Americans with Disabilities-compliant curb ramps, raised crosswalks and high-visibility crosswalk markings. “The project will also evaluate the feasibility of high-occupancy vehicle (HOV) and bus only lanes,” according to the report.

Amsden said both were identified as corridors on the city’s high-injury pedestrian network in a 2019 study.

“It should be,” responded Amsden.

The committee unanimously adopted the commitment for its funding share.