Mural is designed to keep focus on protest marches. 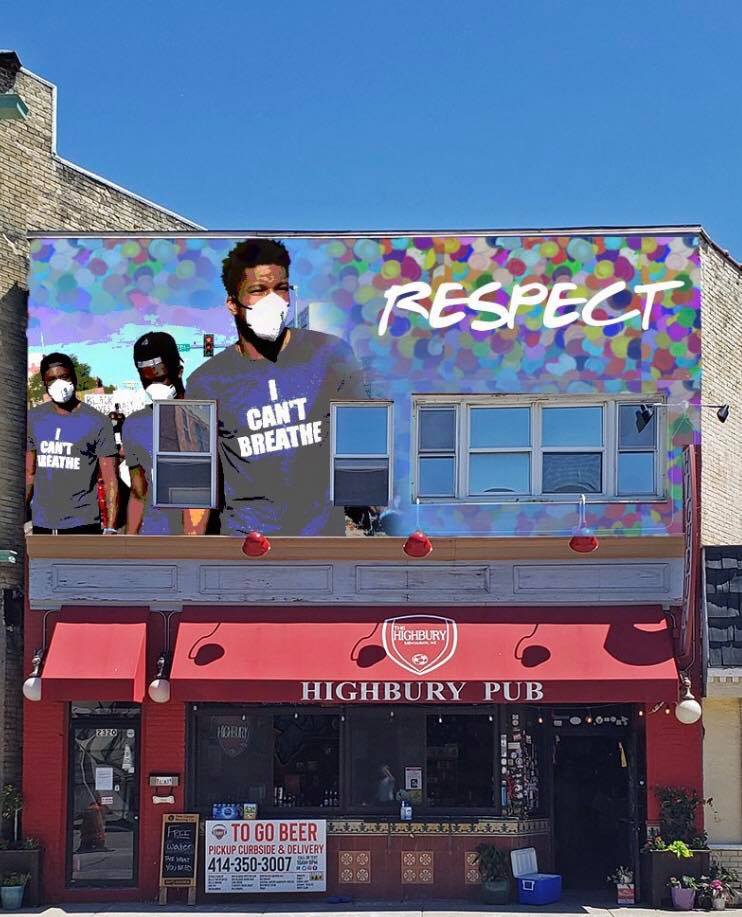 A bar known for its focus on soccer will soon be adorned with a large mural honoring a basketball superstar and the George Floyd protest movement.

Joe Katz, owner of The Highbury Pub at 2322 S. Kinnickinnic Ave., will turn over the second story of the building’s facade to artists Jeff Redmon and Ruben Alcantar to paint a large mural.

Redmon designed the mural. And Alcantar will paint it. Alcantar has been involved in a number of the new protest murals and works at Black Rabbit Tattoo Collective on the building’s second floor.

The plan is to paint Milwaukee Bucks star and reigning NBA most valuable player Giannis Antetokounmpo walking with teammate and older brother Thanasis Antetokounmpo and younger brother and recent high school graduate Alex Antetokounmpo. The word “RESPECT” will be added in the upper right-hand corner above a series of windows.

“A reminder for when the media moves on,” said Katz in announcing the plan for his Bay View building.

The three brothers, who were joined by other Bucks teammates at the march on June 6th, are pictured wearing “I Can’t Breathe” t-shirts.

The basketball players joined protest leader Frank Nitty and others on the 27th Street viaduct as the group marched towards Downtown. The connnection between Nitty and the players was made through team chaplain Kenneth Lock II who has regularly helped lead protest marches.

“It means a lot to the city to see you,” said Nitty to Antetokounmpo in announcing the surprise in a Facebook live video. He praised Giannis for helping change the narrative around black people in Milwaukee. Giannis said he was there in support of his city and justice.

The Milwaukee Bucks led their own march the next day.

Katz is fundraising to pay for the cost of the mural, estimated at $2,500. He is accepting donations via Venmo to Joe-Katz-16.

And while Giannis dominates the headlines, Bucks backup guard Sterling Brown has first-hand knowledge of police brutality and was present both times players marched with protesters.

Brown has a pending lawsuit against the City of Milwaukee and Milwaukee Police Department for an incident in which he was tased, stepped on and arrested after parking illegally in a Walgreens parking lot. The parking lot Brown was arrested in is at the south end of the bridge the players greeted the marchers on.

He released a Players’ Tribune article on Thursday detailing the need not to be silenced. He describes the $400,000 settlement offer from the city in the piece as a move to silence, but city officials never expected Brown to accept the offer. It was presented as a move to limit attorney’s fees should the case go to trial.

Milwaukee Police Chief Alfonso Morales previously apologized for the department’s actions. “The department conducted an investigation into the incident, which revealed members acted inappropriately and those members were recently disciplined,” said the chief in May 2018. Mayor Tom Barrett has also apologized. Ald. Robert Bauman said in September 2019 there is unanimous agreement among city elected officials that Brown was treated poorly.

Brown’s attorney Mark Thomsen previously told Urban Milwaukee that the city admitting guilt is an “absolute condition” of any settlement. But the $400,000 offer and most other police-related settlements don’t include an admission of guilt.