Giannis and other Bucks players show up at one of seven marches. 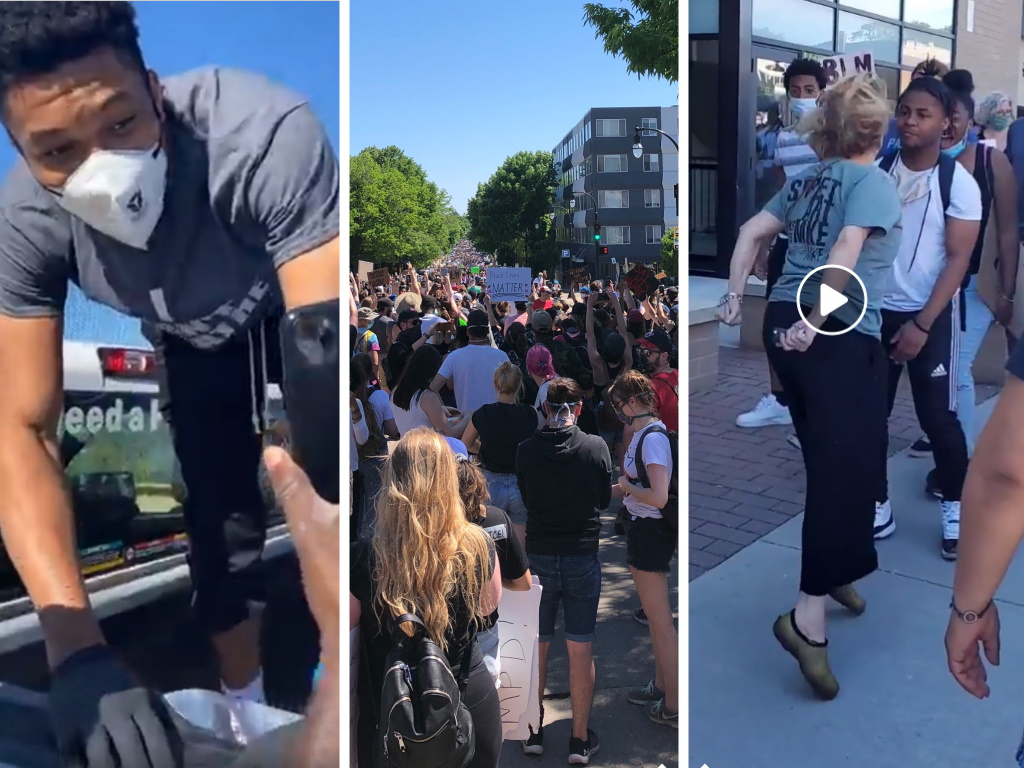 Thousands of Milwaukeeans took to the streets Saturday to demand justice and police reform. They were joined by people across the world who did everything from close down the Golden Gate Bridge in San Francisco to march in Japan and New Zealand.

It’s an expression of frustration, it’s a call for justice and it’s a movement for a more equitable society.

Meanwhile in Fayetteville, North Carolina, over 100 people attended a funeral for George Floyd. It was Floyd’s killing at the knee of a Minneapolis police officer that triggered the nationwide protests.

But the fact that all four officers involved were arrested and charged won’t end the movement.

“Just because you arrested four officers doesn’t change anything, it’s the system. Because they’ll kill somebody else next week and we will have to march again,” said Frank Nitty, the de facto leader of the Milwaukee movement, at a daytime march near the Shorewood-Milwaukee border on N. Oakland Ave. “We don’t care about the officers. We want to change the system.”

The march, led by Darius Smith, drew thousands of people, the biggest one Urban Milwaukee has observed over the nine days of protests. The march went from Milwaukee’s Lower East Side to the Riverwest neighborhood into suburban Shorewood and Whitefish Bay before looping back.

Marchers took over five minutes to pass by Urban Milwaukee as we filmed from above. When Smith went to address the group, he had to ditch his bullhorn and instead climb atop a van with top-mounted speakers in the middle of the crowd.

It was one of at least seven marches that took place in the Milwaukee area Saturday.

The march was in honor of Joel Acevedo who died at the hands of an off-duty Milwaukee police officer in April.

“It means a lot to the city to see you,” said Nitty to Antetokounmpo in announcing the surprise in a Facebook live video. He praised Giannis for helping change the narrative around black people in Milwaukee. Giannis said he was there in support of his city and justice.

And while Antetokounmpo will draw the national headlines as the league’s reigning most valuable player, it is Brown that unfortunately has first-hand knowledge of police brutality.

Brown has a pending lawsuit against the City of Milwaukee and Milwaukee Police Department for an incident in which he was tased, stepped on and arrested after parking illegally in a Walgreens parking lot. The parking lot Brown was arrested in is at the south end of the bridge the players greeted the marchers on.

Nitty said the players approached him through area pastors. “This isn’t just a photo [opportunity],” he said. The players handed out water and marched briefly alongside pastor Kenneth Lock II, Khalil Coleman, Rafael Mercado and Nitty.

But the day wasn’t all highlights.

Attorney In Custody for Spitting in Teens Face

While walking through Shorewood, hundreds of people, many wearing masks because of the pandemic, cheered on the mostly-masked marchers and businesses handed out food and water. But one woman parked in the street to obstruct the marchers and then spit in a teenager’s face while standing on the sidewalk.

The incident was captured on video by Caress Gonzalez Ramirez and attorney Stephanie Rapkin, 64, was led from her home in handcuffs Saturday night at around 10:00 p.m.

A photo, shared by Public Allies Milwaukee executive director Ashley Lee, showed Rapkin being walked away from her house in handcuffs by police officers.

Neither Rapkin nor the unidentified victim was wearing a mask at the time of the incident. The victim had one around his neck.

The Shorewood Police Department said she was in custody, but not yet charged. The case has been referred to the Milwaukee County District Attorney.

Protesters quickly identified Rapkin, in part based on the personalized license plate of her car left in the street.

The marches observed by Urban Milwaukee, with the exception of the Rapkin incident, were peaceful affairs.

One march coming east down W. Vliet St. near N. 35th St. parted to let a Milwaukee Fire Department truck through and then applauded. At another point teenagers were called out to stop setting off fireworks.

Three marches converged at N. 27th St. and W. Vliet St. around 9:00 p.m. with some people heading home and the “all night” group of several hundred forming to head east down Vliet towards Downtown. Urban Milwaukee left the group at 10:30 p.m. when it was crossing the W. Winnebago St. bridge over Interstate 43 and entering The Brewery.

Reggie Moore, director of the city’s Office of Violence Prevention, was also out Saturday evening, and was spotted talking to Nate Hamilton. Hamilton’s brother, Dontre Hamilton, was killed in 2014 by a Milwaukee police offer in Red Arrow Park. Filmmaker Erik Ljung captured the encounter. His film, The Blood is at the Doorstep, is free to watch for this week.

At least three marches are scheduled for Sunday in Milwaukee. 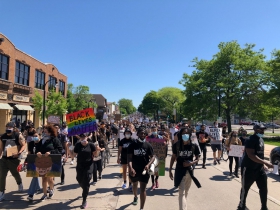 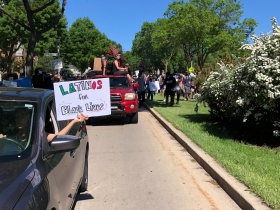 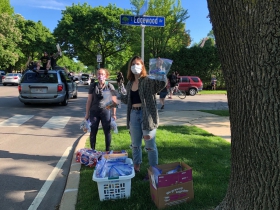 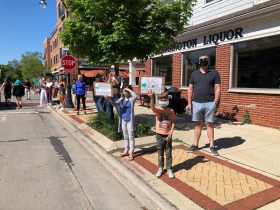 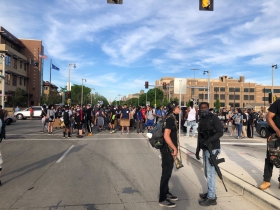 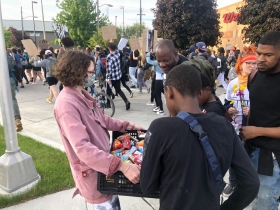