Portrait of a Spitting Shorewood Attorney

Stephanie Rapkin can handle all kinds of trusts, and claims an affiliation with UWM and Marquette. 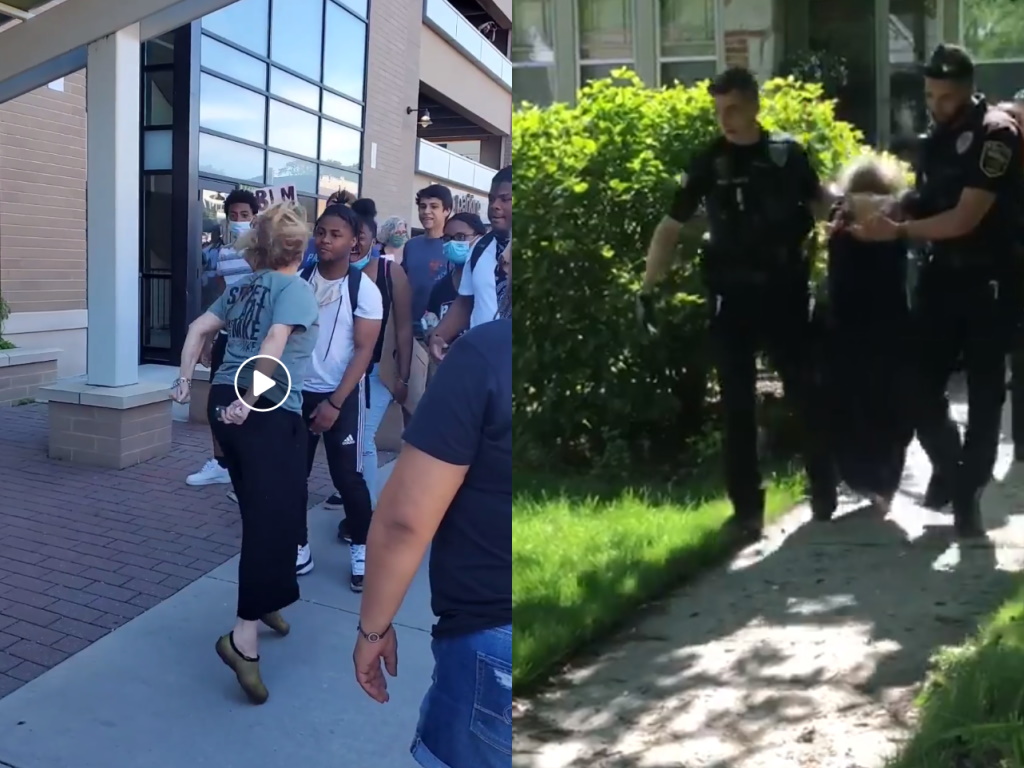 Atty. Stephanie Rapkin, 64, has been dubbed the “Shorewood Spitter” after last week’s events, when she expectorated on a 17-year-old demonstrator, and the next day shoved another, both leading to her arrest — later complicated when she kicked a police officer in the groin. She is currently a “Member in Good Standing” of the Wisconsin Bar Association. But on June 7th Atty. Michael Maistelman filed a complaint with the State of Wisconsin Office of Lawyer Regulation (OLR) seeking disciplinary action against Rapkin, whose office is located in Mequon. The complaint alleges Rapkin violated her Attorney’s Oath to “abstain from all offensive personality.” Maistelman further alleges Rapkin violated provisions of a Supreme Court Rule regarding a lawyer’s responsibility, including a provision that reads:

A lawyer’s conduct should conform to the requirements of the law,
both in professional service to clients and in the lawyer’s business and
personal affairs.

The OLR is an agency of the Wisconsin Supreme Court charged with the discipline of errant attorneys, and has the ability to impose sanctions ranging from warnings to disbarment, the most extreme penalty, which has been advocated by Shorewood officials and legislators including Rep. David Bowen. Maistelman’s complaint will be forwarded to the Preliminary Review Committee, a 14-member board that consists of nine attorneys and five citizen members. The committee will then decide whether to ask OLR Director Keith Sellen to forward a complaint with the Supreme Court. The process can take months.

When asked for a comment on his complaint, Maistelman responded: “My only comment is: ‘If you are not actively seeking justice then you are supporting injustice.’”

Meanwhile, as the wheels of justice grind to a decision regarding Attorney Rapkin, let us take the time to study her career and background.

Designing Personal Solutions For You

As might be imagined from her actions, Rapkin does not specialize in Civil Rights law. Her métier instead lies in estate planning and probate, a practice she has engaged in since her admission to the Bar in 1982, following her graduation from California Western School of Law in San Diego. She bills herself this way: “Experienced and Competent Estate Planning and Probate Attorney. Solving Problems and Designing Personal Solutions For You and Your Family.”

She runs a one-person shop that operates as “The Law Office of Stephanie G. Rapkin.” She is a third-generation Milwaukee lawyer who grew up in Whitefish Bay and Shorewood, where she now resides. Her website features a photograph of an adorable cat, alongside a breathless list of services she offers:

Rapkin also specializes in “Pet Trusts.” These insure that Felix and Fido will not live in straitened circumstances upon your demise.

She has a small office suite, not suited for social distancing. The enterprising Rapkin will not let that stop you from soliciting her services during this pandemic. As she notes on her website:

During the Coronavirus outbreak I am continuing to work with clients. We can work by Skype, Zoom or telephone. I have a large conference room table and we can sit 6 feet apart. We also have a gazebo outside the building where we can sit in nice weather.

Yes, you can sit within spitting distance of Stephanie Rapkin in a Mequon gazebo. But wait — there’s more:

IF ANY ONE IS IN NEED OF SOME N95 MASKS PLEASE CONTACT ME.

I sent Rapkin an e-mail asking for her comments about her arrests, and also to find out how much an N95 mask would cost, but she has not responded.

Rapkin is also active with her blog, which has an overarching theme of the necessity of getting one’s affairs in order, no matter your age. Her most recent post, dating to April 20th, has a comforting headline:

A Little Directive Goes A long Way towards Peace

In her post, she ponders the case of an 18-year-old who succumbed to COVID-19 without suitable estate plans in place. Here she expresses her compassion for young people who might contract the disease:

As often as I address advance directives for clients in their 40’s and above, this is also a discussion for those of all ages who are legally an adult.

For those of you following covid-19 stories,  you are aware that many of the patients of covid-19 are young people. It’s doubtful the 18-year-old had thought much about his or her mortality prior to this. And surprisingly we get to make those decisions as a result of ligation arising from a young patient, under the age of 25, who was in a permanent vegetative state.

Her post has had some 50 comments, all added since the spitting incident. One of the more printable ones reads:

Who goes out of their way to block a peaceful protest with her car, and then get out and yell at people and spit in the face of the nearest black child? In a time of COVID, that’s a life-threatening assault on a minor. No apology would be good enough, but you need to start.

Is Not a Fan of Scott Walker

While her exact politics are unknown, we do know Rapkin signed the Scott Walker recall petition as talk radio’s Mark Belling reported. He also claimed she was a donor to and donated to liberal Supreme Court candidate JoAnne Kloppenburg, though there is no record of that donation in the data base of the Wisconsin Democracy Campaign.

Is Author of Estate Planning Book

Rapkin is also the author of “Planning for Large Estates: Tools and Techniques,” a looseleaf edition volume “specifically designed to meet the needs of attorneys working with large estates.” It is not likely to be required reading for partners at Foley or Quarles & Brady, who actually deal with large estates, unlike Rapkin, whose client list has no prominent names, according to a search of the wills she has filed over the decades. A new copy will run you $780 and can be purchased though Amazon. The book is also drawing reviews, of which this one is typical:

Crazy lady who spits on Black teens. Why Amazon publishes her trash is beyond me.

Rapkin’s website includes information that she regularly contributes columns and articles for estate planning publications, and is much in demand for quotes from news sources such as The Wall Street Journal and Money Magazine. In addition to writing for The Journal of Taxation, Trusts & Estates, Estate Planning and Taxes: The Tax Magazine, she claims “she has regularly guest lectured at Marquette’s law school and U.W’s law school and as an adjunct at the University of Wisconsin – Milwaukee.”

She does not appear on the list of MU Law School faculty and staff and Urban Milwaukee has not heard back from Marquette regarding her status.

I inquired as to her service as an adjunct professor at UWM, and received this response from John G. Schumacher:

We had to dig back pretty far in the records for this one. We have a statement from the university, which you can use as you wish:

“Stephanie Rapkin taught some part-time at UWM in the mid-1990s, but she has not been affiliated with the university for more than two decades. The university is dismayed by her recent actions, which are contrary to everything UWM stands for. Respect for diversity and free speech are among UWM’s core values.”

One thought on “Plenty of Horne: Portrait of a Spitting Shorewood Attorney”