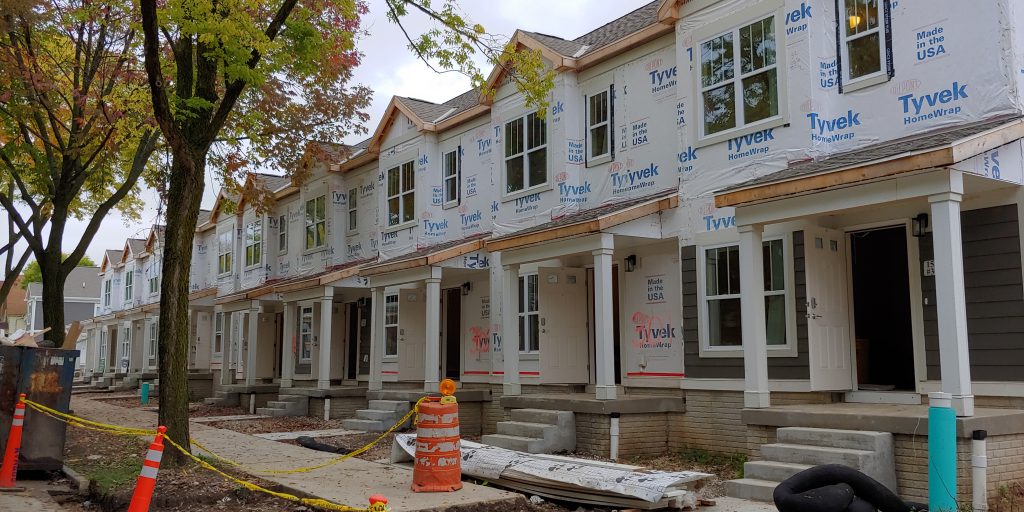 The city remains on track to fulfill the signature policy proposal of Mayor Tom Barrett‘s 2018 State of the City address.

“Let me be clear; this is not merely about buildings. It is about people,” said Barrett in 2018 when he unveiled a plan to create 10,000 affordable homes in the city over the next decade.

The focus on affordable housing came in the wake of a greater downtown surge in market-rate apartment construction and a scathing look at the nation’s eviction crisis in Matthew Desmond’s book Evicted, which takes place in Milwaukee.

A report provided to Urban Milwaukee by the Department of City Development (DCD) shows that the city is on track. DCD reports the city has supported the creation, maintenance or acquisition of 2,092 units of affordable housing since the start of 2018.

The 10,000 Homes Initiative does not encompass an entirely new series of funds and programs, but marshals them for greater impact and creates a mechanism to track results. Included in the plan is a change in policy to aggressively use tax incremental financing to support affordable residential housing developments, an expansion of the STRONG Home Loans Program that provides forgivable loans for home repair and the coordination of city resources, including the sale of city-owned homes and prospective homeowner education seminars, to create more housing. 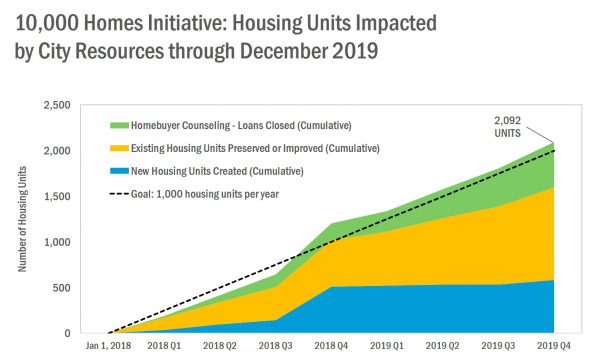 10,000 Homes Initiative progress. Graphic from the City of Milwaukee.

Barrett in a 2018 interview said the effort would focus on a targeted area surrounding Downtown mirroring the MKE United plan, but the city report covers the entire city. “Growing affordable units in these areas will make it easier for workers to get to nearby jobs. Additional development will also create construction jobs for city residents,” said Barrett. MKE United defines the greater downtown area as going from W. Meinecke Ave. on the north to W. Greenfield Ave. on the south and from the lake west to N. 27th St.

Many of the recorded units fall in the areas of the city hardest hit by the foreclosure crisis. A mix of new construction, home improvements and home sales have taken place in the 6th, 7th and 15th aldermanic districts roughly centered around the district’s intersection at W. Locust St. and N. 20th St. A map of the counted units was created by the city and provided to Urban Milwaukee.

The city’s new units include new or redeveloped buildings including the Welford Sanders Lofts, Fifth Street School, Garfield School, The Griot, City Place, Legacy Lofts, Washington Park Townhomes, St. Anthony‘s Apartments and SEVEN04 Place. It also includes the redevelopment of the Housing Authority of the City of Milwaukee‘s (HACM) Westlawn Gardens complex on the far northwest side. Habitat for Humanity constructed homes are also included in the number.

Many of the new buildings relied on tax incremental financing support to fill financing gaps caused by increasing construction costs and a decline in the value of low-income housing tax credits.

The city counted results from 20 programs in its report on the number of homes preserved or improved. The programs include the Milwaukee Employment/Renovation Initiative (MERI), which it is expanding in 2020 by pulling the remaining funding from the also-counted Rehab to Rent program. Also included are the STRONG Home Loans, Compliance Loan, and Milwaukee Health Department lead abatement programs.

Not every program participant was counted. “Only housing units that receive city assistance and benefit households with an income of 80 percent or less of the Area Median Income or benefit households located in the [Community Development Block Grant] area are counted (in cases where household income is unknown, only housing units in the CDBG area are counted),” says the report. It also notes that units that were counted through multiple programs were filtered to count only once.

And since the city has hit the goal two years in a row, Barrett and the Common Council now have a new question to answer. Is the goal big enough? Multiple council members derided the effort as “business as usual” in interviews in early 2019 and pushed for the city to find ways to do more.

But the 2020 budget yielded little in the way of new programs or funding commitments. A handful of new initiatives are now in their early stages, including redesigning “for sale” signs on city-owned properties, creating emergency housing and studying housing models in other markets.

10,000 Homes Initiative Infographic. Image from the City of Milwaukee.

One thought on “Eyes on Milwaukee: 10,000 Affordable Homes Effort On Track”