Ambitious plan is centerpiece of mayor's State-of-the-City speech. Will council support it? 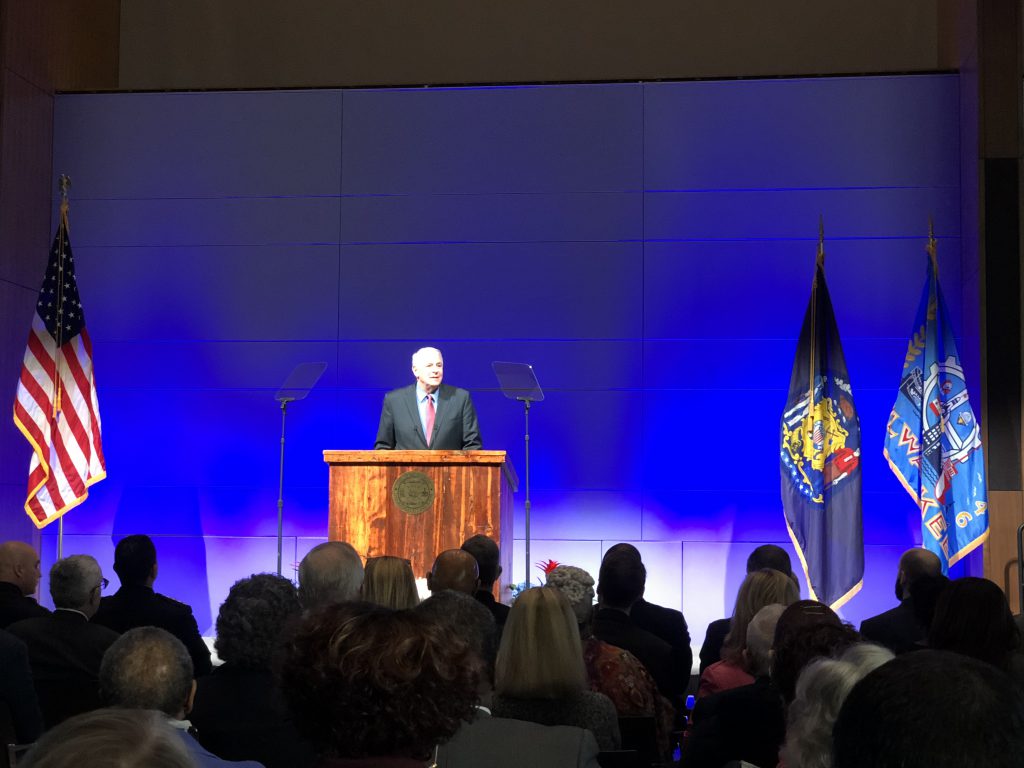 Mayor Tom Barrett unveiled a plan this morning to build 10,000 affordable homes over the next decade in neighborhoods in the heart of the city.

The move comes as the city has seen an unprecedented wave of development Downtown, while property values in nearby neighborhoods have been stagnant or falling.

The plan, which will rely on a series of city programs and private partners, will include construction of new apartment buildings and owner-occupied single-family homes. It will also include financing the rehabilitation of the city’s existing privately-owned houses. The city will also continue to pursue selling as many properties as possible that they acquire through property-tax foreclosure. Barrett says the city sold 429 such properties in 2017.

“Let me be clear; this is not merely about buildings. It is about people,” said Barrett.

Barrett unveiled the “10,000 Households” campaign as part of his annual State of the City speech, held this year in the auditorium at Northwestern Mutual‘s recently-completed, $450-million office tower. Construction of the insurance company’s tower was a resounding success for city residents thanks to a local hiring requirement.

The plan includes an expansion of the use of tax-incremental financing districts to fund residential development. TIF districts, which rely on borrowing against future property tax revenues to pay for up-front costs, have been used by the city to plug gaps in new affordable housing developments including the 64-unit Legacy Lofts at 1500 W. North Ave. and the 60-unit SEVEN04 Place at 704 W. National Ave. “In the coming year, we anticipate more projects like these,” said the mayor.

Besides the TIF districts, Barrett is also pushing an expansion of the STRONG Home Loans Program, a city program that issues partially forgivable loans for home repair.

Barrett already has one partner lined up. “Associated Bank has agreed to purchase a significant portion of our STRONG Homes Loan portfolio, which means we hope to add approximately $1.5 million to the funds available to help people stay in their homes.” The bank agreed to a $200 million settlement with the federal government in 2015 for discriminatory lending practices.

In an interview with Urban Milwaukee, Barrett said the city would focus on the neighborhoods included in the MKE United effort. The plan defines the greater downtown area as going from W. Meinecke Ave. on the north to W. Greenfield Ave. on the south and from the lake west to N. 27th St. “Growing affordable units in these areas will make it easier for workers to get to nearby jobs. Additional development will also create construction jobs for city residents,” said Barrett.

Barrett will also push the state, through the Wisconsin Housing and Economic Development Authority, to be a partner in the effort. WHEDA currently allocates low-income housing tax credits to projects across the state, as well as providing loans to developers and homeowners.

When asked after the speech about his feelings on the plan, Common Council President Ashanti Hamilton said “some of the strategies that were put forth with the housing issues can’t just focus on downtown and the surrounding downtown areas. We have to have a strategy that is going to connect the growth of downtown not only to the surrounding areas, but throughout the city.”

Throughout his 41-minute speech, Barrett touted a number of projects underway across the city. The development of a new library on the city’s northwest side, a new private high school in Clarke Square, Potawatomi’s $10 million sponsorship of the streetcar and the city’s plan to extend it, the city’s deal to sell water to Waukesha, the Blueprint for Peace and a number of public safety initiatives.

Not mentioned were any members of the Common Council, a highly unusual move given his frequent references in prior speeches. The mayor and council have been at odds following the revelation that the Health Department had failed to send out hundreds of letters to families of children that had tested positive for lead poisoning.

After the speech, in response to a question by Urban Milwaukee, Barrett said: “Quite honestly there is so much going on right now that I felt that we had to focus on that. You can see that I focused more than I usually do on national and state issues.”

When asked about the lack of Common Council references, council president Hamilton said: “It would have been very difficult for him to have a speech at all, because most of those initiatives that were highlighted in the speech were council initiatives. Council members would have been littered throughout the speech.

What it does show, there is a commitment now, whether it is through partnership or conflict, that we are going to move policies that affect residents across the city and we’re all going to push him together.” Council members Nik Kovac, Cavalier Johnson, Terry Witkowski and Tony Zielinski were also in attendance at the event.

Hamilton went on to state: “I don’t think too many council members are interested in shoutouts, but they are very committed to the objectives and the policies that they support being implemented the proper way by the administration.”

When asked about the working relationship between the council and mayor’s office, after a long pause Hamilton said “we’re always trying to work together.” He acknowledged that the setup of the legislative versus executive branch can at times create conflict.

Barrett did call out interim Health Dept. Commissioner Patricia McManus in his speech and touted the steady progress the department has made in reducing the number of children with lead poisoning. He stressed that much work remains to be done with lead abatement.

Barrett closed his speech with a throwback the core piece of last year’s speech, the city’s fiscal issues stemming from a steady reduction in state shared revenue. “From 2011 to 2015, the City of Milwaukee was a net donor to state government, to the tune of $1.1 billion dollars. In that same time, our shared revenue decreased in inflation-adjusted terms by $21.7 million. Last year, I proposed a solution that let our residents choose by referendum to support public safety with a half-cent sales tax. That means adding police officers, expanding trauma-informed care, and not raising property taxes to do it. The State said no. It is time for the Governor and the Legislature to empower Milwaukee residents to decide for themselves how to fund the services they need,” said Barrett.

Hamilton said that the sales tax shouldn’t be the only thing on the table. He said the city should also explore a dedicated payroll or income tax as well as an increase in state shared revenue. “I don’t necessarily want to just pigeonhole us to just a sales tax for public safety,” said Hamilton.