The city gets only 66 cents in state spending for every dollar in state taxes paid.

In the 2012 recall election, Gov. Scott Walker bluntly signaled that a vote for his opponent, Milwaukee Mayor Tom Barrett, could make this state as bad as the city. “We don’t want Wisconsin to become like Milwaukee,” he warned.

Walker was well aware that Milwaukee was seen in a negative light across much of the state, as a place of poverty and crime or for some people as a simply a city with many minority residents. To get elected, Walker cynically capitalized on that negative image, while reinforcing it because, after all, he had served as Milwaukee County Executive. Who would know better how bad Milwaukee was?

In fact, even as Walker was libeling the state’s biggest city, the reality is the opposite was true: it was Walker’s state that was the relative loser, that was leeching off the city. By 2012, the data shows, the city’s economy had become so successful that Milwaukee got back just 88 cents in total state aid for every dollar in total taxes it paid to the state.

That includes every category of state dollars flowing to Milwaukee, from state aid to Milwaukee Public Schools to shared revenue to cities, transportation aid and other smaller categories, and also includes every form of taxes flowing from Milwaukee to the state, including sales taxes and personal and corporate income taxes paid by city residents and businesses. All this information is tracked by the state Department of Revenue (DOR) and it shows Milwaukee is a net contributor to the state.

“It’s stunning,” says Barrett, whose staff used the DOR data to create this picture of Milwaukee. What it shows is that the city, in fiscal terms, has become a huge success.

That was not true as recently as 2009, when the city was getting more total state aid than taxes it sent to Madison: Milwaukee was getting $1.07 from the state for every dollar in taxes it paid. But by 2011 the city was a net contributor to the state and that net outflow has increased every year until by 2015 the city was paying nearly $1.4 billion in total taxes to the state and getting back just over $912 million in state aid. That’s a return of just 66 cents from the state for every dollar in taxes paid. If that trend continues, and all signs suggest it will, that figure will drop further in 2016 and even further in 2017. 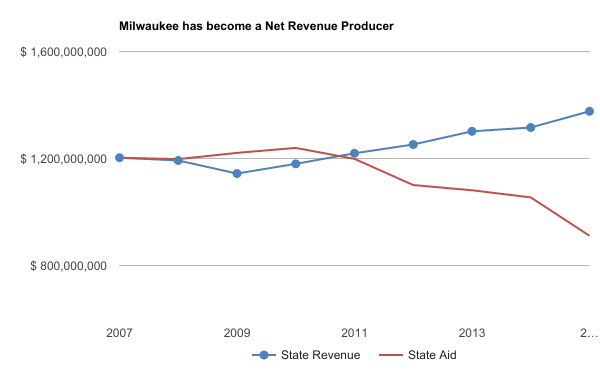 What’s happening? Simple: state aid is plummeting, while Milwaukee’s economy is growing, spinning off ever higher sales and income taxes.

The state has been reducing shared revenue to the city for many years, going back to the mid-1990s, as I have reported, and that has continued under Walker. Meanwhile, Walker and the Republican legislature have also watered down the equalization formula in state school aid that had long awarded proportionately more money to districts with more poor students, with the result that Milwaukee gets an ever smaller portion of the state educational pie.

Meanwhile, the city has been booming economically since the Great Recession, enjoying tremendous real estate development, seeing its many local businesses recover and grow revenue, and becoming a magnet for companies moving from the suburbs to the city.

What’s all the more remarkable about the city’s success is that it has come despite the fact that it has so many poor people. Of the 50 biggest cities in America, only San Antonio has a higher proportion — 73 percent — of its low-income metro-area people living within the city; Milwaukee ranks just behind, with 72 percent of low-income metro residents living in the city.

“We are expected to take care of most of the region’s low-income people,” Barrett notes. “Yet even with that we are seeing increases in the taxes and revenue we are paying to the state.”

This could be a good news story except the city is prevented from benefitting from its own success, because under state law it cannot levy its own sales tax or income tax. “The revenue sources that are growing the most from our economy, the income and sales taxes, we are shut out from,” Barrett laments.

Most cities in America have the ability to levy a sales or income or gas tax. Not cities in Wisconsin. That law goes back to 1911, when Wisconsin created the first state income tax in America. The legislature also wrote a law preventing cities from levying an income tax — to prevent some cities from gaining an advantage over others. Instead, the legislature committed to returning a significant portion of the state income tax revenue to cities through state shared aid.

But the legislature began retreating on that century-old grand bargain in the 1990s. Result: In 1995, 53 percent of Milwaukee’s general purpose budget was paid for by shared revenue, but that dropped to just 39 percent by 2012. Today, it’s down to 36 percent.

“State shared aid once paid for our entire police and fire department budget,” Barrett notes. Now it doesn’t even pay for the entire police budget.

Yes, the city’s property tax base has grown, but that’s where the poverty becomes an issue. “We lost $5 billion in real estate value from the Great Recession and we still haven’t gotten back where we were before the recession,” Barrett notes. “There are parts of the city that haven’t approached coming back to pre-recession levels.” Which limits property tax growth.

This has resulted in a paradox: a financially successful city with an increasingly robust economy has such a constrained budget it can’t pay for as many police officers as its leaders would like and must pinch pennies on major social issues like replacing lead laterals that can cause health problems.

Barrett says the city needs to get this story out to others in the state. “There are people who love to draw a picture of what a leech on the state Milwaukee is,” he says. “We’re trying to change the conversation so people realize Milwaukee is not a drain on this state.”

Quite the contrary. Milwaukee is the home of more Fortune 500 headquarters than most mid-sized cities and is a huge generator of wealth for the region. Tim Sheehy, President of the Metropolitan Milwaukee Association of Commerce, estimates that Milwaukee county “is a net exporter of personal income — to the tune of $6.7 billion — to surrounding county residents to buy homes, pay property taxes, school costs. Milwaukee County has both the greatest poverty and the greatest production of wealth.”

“The story we need to tell to the legislature, and the citizens of the region,” Sheehy says, “is this: While we elect and collect revenue locally, this economy functions regionally. We are all in this together.”

But is that how Gov. Walker sees the situation? Or Republican legislative leaders? I shared the information about Milwaukee’s net contribution with Walker’s communication’s director Tom Evenson, with Assembly Speaker Robin Vos, and Senate Majority Leader Scott Fitzgerald and asked for a comment. None responded.