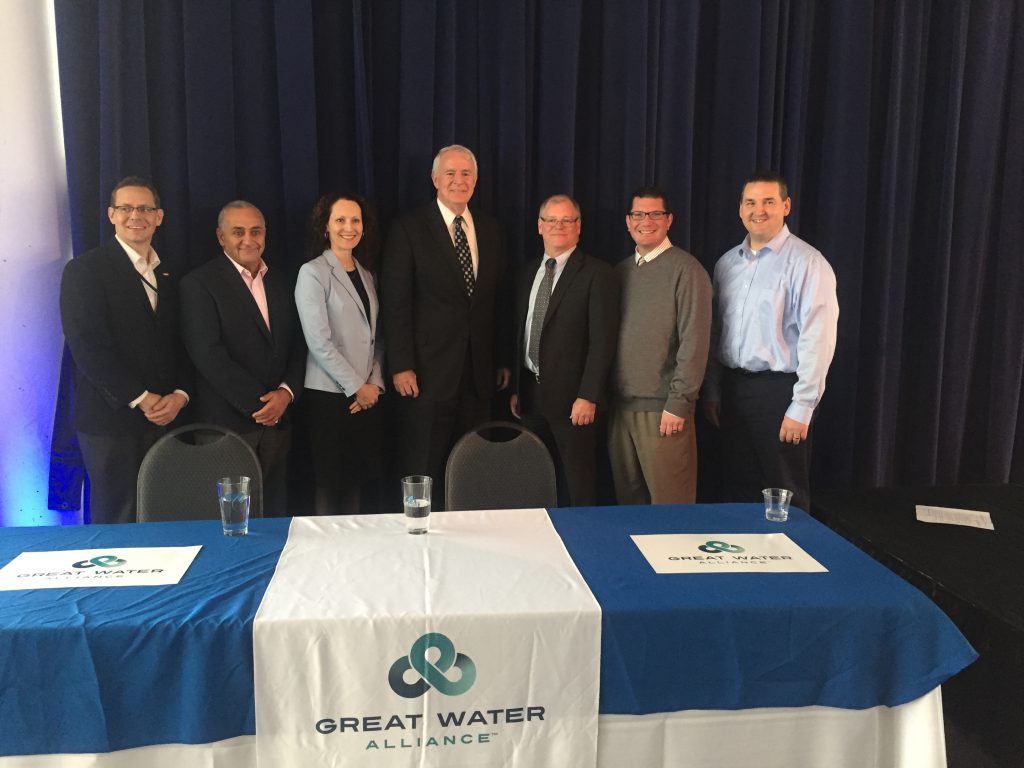 With no floor debate, the Milwaukee Common Council approved a 40-year deal to sell water to the city of Waukesha. The only objection to the sale came from Alderman Nik Kovac, who said “I cannot support a plan that will only encourage regional sprawl under the terms it has been occurring for several generations.” Kovac characterized regional cooperation to date as a one-way street that has hurt the city and led to Milwaukee being the most segregated region in the country.

Announced in late October, the deal will have water flowing from Milwaukee to the city of Waukesha by 2022, and is the largest intergovernmental cooperation agreement in southeastern Wisconsin history according to Milwaukee Mayor Tom Barrett and Waukesha Mayor Shawn Reilly. It will allow Waukesha to replace their contaminated wells with water from the city-owned Milwaukee Water Works.

Kovac’s issues regarding broader regional cooperation were broached by council president Ashanti Hamilton at a committee hearing on the deal. Reilly told the committee “A lot of times there is a misconception as to Waukesha County versus Waukesha city. We address housing all the time. We have a transit system that is very vibrant.” Barrett noted that the two mayors continue to look for ways to work together.

The area and amount of Waukesha’s water withdrawal from the Great Lakes is governed by the Great Lakes Compact. The 2016 approval, the first diversion request granted under the compact, allows Waukesha to provide water only to their existing service area and a couple towns entirely surrounded by the city. Waukesha will initially draw 6.1 millions of gallons a day.

Both mayors have characterized the deal as a win-win. Waukesha will save an estimated $40 million in up-front capital costs and an estimated $200 per customer annually over alternative remediation options. Milwaukee will get a new water customer, adding to the 14 other communities that buy water from the Milwaukee Water Works, and a $2.5 million cash payment. The 40-year deal is valued at $286.2 million.

Today’s approval was expected as the Steering and Rules Committee had unanimously passed the deal last Tuesday. The committee contains a majority of the members of the council, consisting of the seven committee chairs and the council president.

Permitting and construction will be completed in 2022 according to documents submitted to the Common Council. At that point Waukesha will begin paying Milwaukee at least $3.2 million annually. The payments will rise to $4.5 million if Waukesha uses the full 8.2 million gallons the deal allows. Those funds will go to the city-owned Water Works. By January 31st, 2020, Waukesha must also pay Milwaukee $2.5 million, a fee that will go to the city’s general fund and is intended to be used to replace lead laterals that connect properties to city water mains. If Waukesha increases its consumption to 8.5 million daily gallons, the city will owe Milwaukee an additional $250,000 plus the increased cost of the water.

The city has plenty of capacity to support such a sale according to Water Works head Jennifer Gonda. She told the commission that while the utility supplies approximately 100 million gallons of water a day, it has the capacity to treat up to 360 million gallons daily. The sale to Waukesha allows the utility to more effectively use their existing infrastructure, allowing for long-term cost savings. Gonda said these savings are valued at $42 million, an amount that will grow as debt on the pumping station is paid off.

The city, which receives a profit from the water utility, will see increased revenue in the amount of $150,000 to $200,000 annually. That payment is based on the book value of the utility and limited by state law. The 2018 city budget includes a payment of $12.7 million from the utility.

The utility will need to build a new pumping station and two miles of 30-inch-wide pipe to get the water to Waukesha, which lies uphill from Milwaukee. That station will be placed near S. 60th St. and W. Howard Ave. It has an estimated cost of $18 million according to Gonda, but will paid from the utility’s independent budget, not the city’s.

The deal still needs approval from the Waukesha city council. The Milwaukee Common Council will eventually need to approve the plans for the pumping station’s construction.