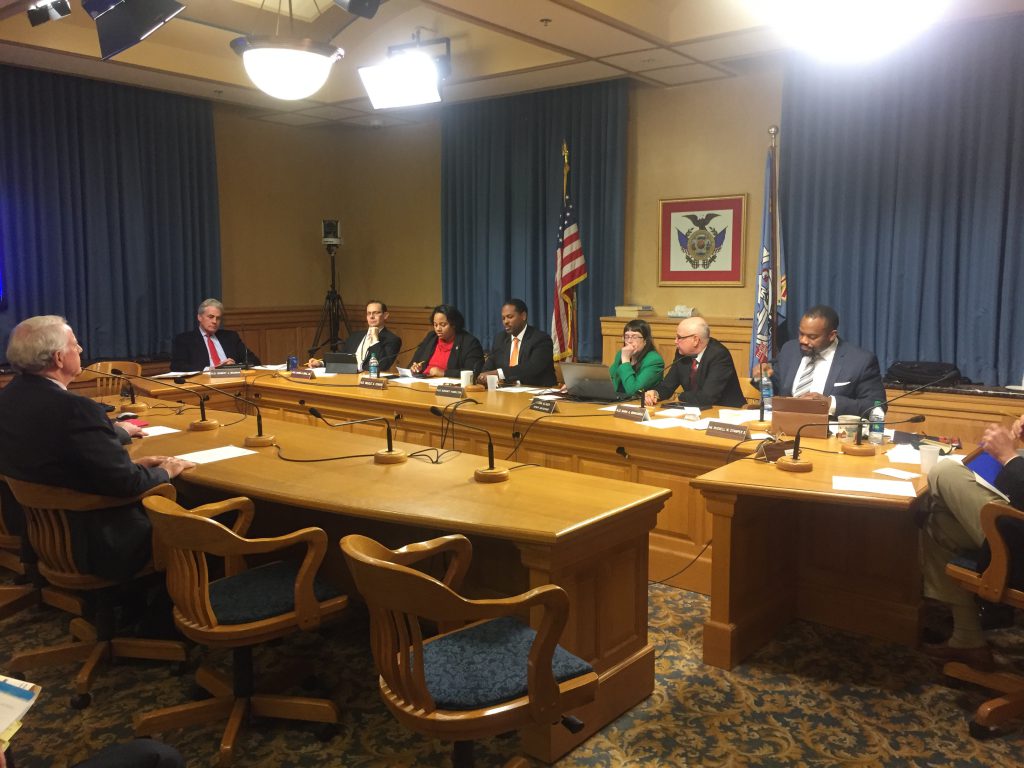 The Steering and Rules Committee. Photo by Jeramey Jannene.

The Milwaukee Common Council won’t throw the proposed water sale to Waukesha overboard. The deal won unanimous approval yesterday from the council’s Steering and Rules Committee, which makes its approval by the full council all but certain.

Announced in late October, the deal would have water flowing from Milwaukee to the city of Waukesha by 2022, and is the largest intergovernmental cooperation agreement in southeastern Wisconsin history according to Milwaukee Mayor Tom Barrett and Waukesha Mayor Shawn Reilly. It will allow Waukesha to replace their contaminated wells with water from the city-owned Milwaukee Water Works.

“Over the last seven months we have spent hundreds and hundreds of hours negotiating over this,” Barrett told the Steering and Rules Committee.  In 2012, the council had authorized the mayor to negotiate such a deal, with the contingency that it not include any service area expansion for Waukesha.

“I ruffled a lot of feathers west of here by sending a letter to the Great Lakes governors,” Barrett said, referring to his letter that supported reducing Waukesha’s water request to their existing service area. The Waukesha water request, approved in 2016, was the first diversion approved by the governing body of the Great Lakes Compact. Barrett said it was important to him to uphold the Great Lakes Compact, something that the eight governors agreed with when they reduced the water request to the existing service area plus a handful of townships encompassed entirely by the city.

Both mayors characterized the deal as a win-win for both communities. Waukesha will save an estimated $40 million in up-front capital costs and an estimated $200 per customer annually. Milwaukee will get a new water customer, adding to the 14 other communities that buy water from the Milwaukee Water Works, and a $2.5 million cash payment. The 40-year deal is valued at $286.2 million.

Council president Ashanti Hamilton asked the mayors why the deal lacked any inclusion for provisions regarding affordable housing or transportation. Said Barrett: “Quite honestly I think most of those transportation issues were at the mercy of the state, I also know they’re involved in housing in Waukesha… I don’t think of Waukesha as a wealthy, wealthy city.” Barrett noted that both him and Reilly are members of the regional transportation advocacy group MetroGO! (disclosure: I sit on the board of the group), and increasingly face many of the same issues.

Reilly told the council  “A lot of times there is a misconception as to Waukesha County versus Waukesha city. We address housing all the time. We have a transit system that is very vibrant.”

Ald. Jim Bohl praised Barrett: “We have seen with this mayor a bridge being built where we have established among other things a partnership around recycling, an ability to have discussions. I think it shouldn’t begin or end with discussions on housing, transportation, but where else do we find commonality on any number of things, including shared revenue, local control.” Bohl said he hopes the agreement will make it easier to work with other suburbs in the future.

Ald. Robert Bauman noted that the agreement complies with resolutions the council passed in 2008 and 2012, which stipulated that it should include a non-compete clause where the cities won’t try to lure businesses away from one another and an economic compensation agreement.

The city has plenty of capacity to support such a sale according to Water Works head Jennifer Gonda. She told the commission that while the utility supplies approximately 100 million gallons of water a day, it has the capacity to treat up to 360 million gallons daily. The sale to Waukesha allows the utility to more effectively use their existing infrastructure, allowing for long-term cost savings. Gonda said these savings are valued at $42 million, an amount that will grow as debt on the a pumping station is paid off.

Permitting and construction will be completed in 2022 according to documents submitted to the Common Council. At that point Waukesha will begin paying Milwaukee at least $3.2 million annually for 6.1 million gallons of water a day. The payments will rise to $4.5 million if Waukesha uses the full 8.2 million gallons the deal allows. Those funds will go to the city-owned Water Works. By January 31st, 2020, Waukesha must also pay Milwaukee $2.5 million, a fee that will go to the city’s general fund and is intended to be used to replace lead laterals that connect properties to city water mains. If they increase that amount to 8.5 million gallons, Waukesha will owe the city an additional $250,000.

The city, which receives a profit from the water utility, will see increased revenue in the amount of $150,000 to $200,000 annually. That payment is based on the book value of the utility and limited by state law. The 2018 city budget includes a payment of $12.7 million from the utility.

The utility will need to build a new pumping station and two miles of 30-inch-wide pipe to get the water to Waukesha, which lies uphill from Milwaukee. That station, which will be a far cry from a “Quonset hut with a diesel engine” as Bauman quipped, will be placed near S. 60th St. and W. Howard Ave. in Ald. Mark Borkowski‘s district. It has an estimated cost of $18 million according to Gonda, but will paid for out of the utility’s independent budget, not the city’s. Future planning meetings for that additional infrastructure will be needed.

The deal next goes to the full Milwaukee Common Council, but with the unanimous approval from the council’s Steering and Rules Committee a majority of the council has now voted in favor of the deal. The council will later need to approve plans for a pumping station to support the water transfer.

The Waukesha Common Council also must approve the deal. Waukesha alderman Joe Pieper predicted the council is likely to support the deal.

He noted the council has been warning constituents their water rates will go up under any scenario, but that working with Milwaukee would be the cheapest option. Pieper told the Milwaukee officials, “it’s an opportunity for us to look past politics and do what’s best.”

If you think stories like this are important, become a member of Urban Milwaukee and help support real independent journalism. Plus you get some cool added benefits, all detailed