Northwest side to get new library and 65 apartments. 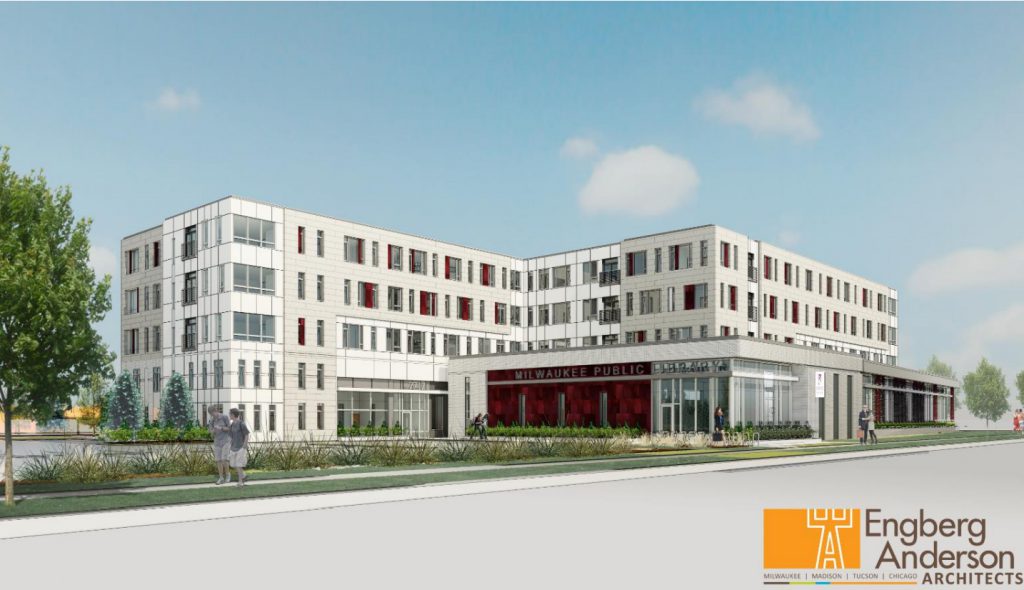 A long-anticipated new library is coming to the city’s northwest side in 2019. A partnership of Maures Development Group and the Royal Capital Group will construct a four-story, mixed-use building with a first-floor library and apartments above it at 7717 W. Good Hope Rd. It will be known as the Good Hope Library, replacing the nearby Mill Road Library.

A term sheet for the deal was unanimously approved Tuesday by the Common Council’s Zoning, Neighborhoods & Development Committee. The new library was first announced in 2014, but the development has been delayed by difficulties in securing financing.

The new facility, which will be developed at an estimated cost of $14 million, will include 65 apartments and a 17,000 square-foot library. All but nine of the apartments will be set aside at reduced rates for those making less than 60 percent of the area’s median income. The building is being designed by Engberg Anderson Architects.

The project will include a mix of one, two and three-bedroom units. Ten of the units will be two-story townhome units. The development will include 65 parking spaces for residents and 60 for library users.

The new library is scheduled to open in mid-2019, according to Milwaukee Public Library development manager Sam McGovern-Rowen.

The project’s delay was caused by a failure to secure competitively-awarded low-income housing tax credits from the Wisconsin Housing and Economic Development Authority. Developer Melissa Goins of Maures Development, who has developed a number of projects using the tax credits, noted in an interview with Urban Milwaukee that “you just look at the feedback from WHEDA and adjust accordingly.” She made the adjustments, re-applied, and in May 2017 it was announced that the project had secured $805,063 in tax credits.

The development team will acquire the 95,988 square-foot lot from the city for the discounted price of $78,000, but in exchange will need to provide the new library space to the city free of charge. The city will take ownership of the space as a tax-exempt condominium. The remainder of the development will be required to pay property taxes.

Goins told the committee that, per the term sheet, construction will begin on the project on March 15th and should wrap up roughly 12 months later. The development team must deliver the library space to the city by the end of 2018.

The project has the support of area alderwoman Chantia Lewis, who noted at the hearing that if she served on the committee she would quickly move to approve the project.

Zimmerman Architectural Studios will design the new library space for the city. The city has budgeted $4.5 million to build out the library, and will seek supplemental support from the Milwaukee Public Library Foundation.

The Mill Road Library, which is at the end of its functional life, will be replaced and likely sold by the city once it closes. Located at 6431 N. 76th St., the old library was originally opened in 1970, and will continue operating as a limited service library until the new one opens, according to McGovern-Rowen.

The Good Hope Library will join a wave of redeveloped libraries including the Villard, East and Mitchell libraries. The Mitchell Street Library, which was beset by similar delays, opened to the public this weekend.

The deal must next be approved by the full Common Council.