Mitchell Street branch is the city’s most technologically advanced. 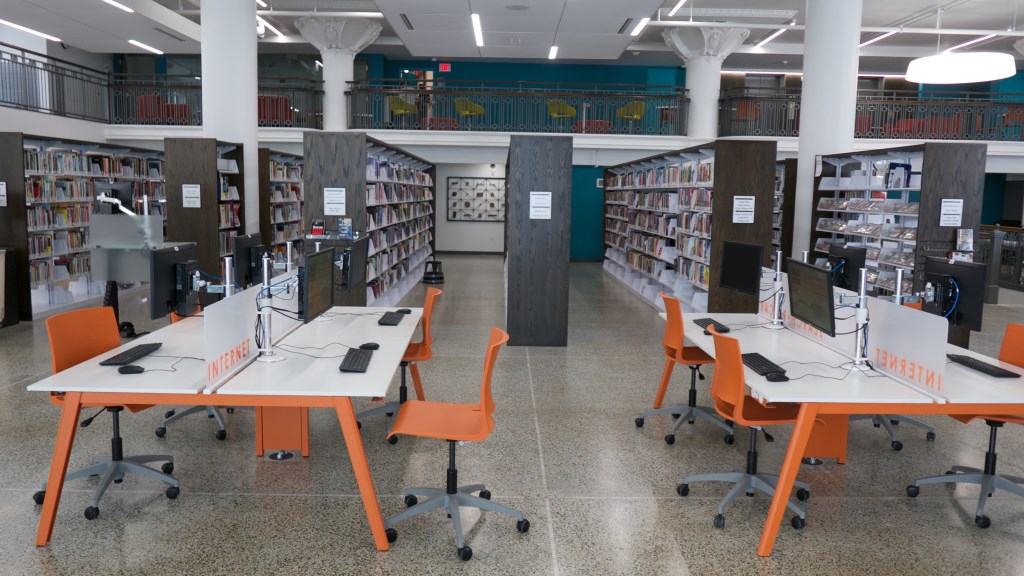 The newly completed Mitchell Street public library branch is open for business and “it’s not your grandma’s library,” as Mayor Tom Barrett quipped while touring it last week.

The library sits at the corner of W. Historic Mitchell Street and 9th street in an early 20th century building that was originally a department store called the Hills Building. It served several different tenants over the past century, before being redeveloped into a library.

The interior of the historic building has been transformed into a 21st century library with significant attention paid to technology, but it has retained a number of the building’s hallmark architectural qualities. Like its tall columns and ornate capitals, or its original mezzanine railing.

The new library branch is part of city-wide effort to create new neighborhood libraries and is the fourth to be completed. The Mitchell Street branch is a replacement for the Forest Home branch, and is the latest in a string of Milwaukee Public Libraries to use a mixed-use development model. This helped the library secure funding for the project with the developer, Gorman & Co., also building 60 apartments on the three floors above the library.

Visitors to the library may be initially struck by the tall, white columns, open floor plan and excellent natural lighting. But a closer look will reveal the wide array of unique services, technology and thoughtful detail that go into this new library branch.

The neighborhood surrounding the Mitchell Street branch has the highest population of families with children in the city. So the library is piloting a learning for teens program at the branch with hopes to expand it to others in the system.

Part of this program is connecting teens with an array of technology. And the library has built a state-of-the-art space on the basement floor for teens to explore technology. They have a sound booth, green screen, a coding table, a gaming area, editing bays for audio and video, and plans to hire 10 paid teenage interns that can help out and work with their peers on the technology.

Petra Deucker, a teen outreach and education specialist with Milwaukee Public Library, said they will initially run programs and events in the space to picque interest and familiarize teens with what is available. But the long term goal is an open environment that is less instructive and more amenable to creativity.

“We don’t want it to feel like a classroom,” she said.

The basement isn’t the only space designed with teenagers in mind, though. Above, on the first floor, against the eastern wall, is the “teen lounge.” Among other things, this space boasts desks and tables with ports teens can plug their phones and electronics directly into for charging.

And right next to the teen area is the children’s area. Sam McGovern-Rowen, project manager for library construction, said they designed it this way so teens watching a younger sibling can have their own space and still keep an eye on the young one.

Another feature that is expected to be popular after the library opens is the “social stair.” It’s a row of seats built into the staircase with cushions and charger ports that looks like a small section of upscale bleachers.

Barrett said he want to have the library system “blossom in our neighborhoods,” and this one looks like it fits the bill. The Mitchell Street branch was designed with the neighborhood in mind, and it’s well placed in a historic building along a business strip where it can become a gathering space for the neighborhood.

And of all the library branches in the system, it may be the most technologically advanced, which Barrett emphasized, “reflects how our community is changing in a positive way.”

Library director Paula Kiely said, “I think in any community the library really is a hub of activity.” The Mitchell Street branch seems likely to become just that. 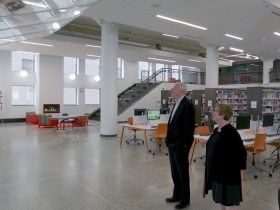 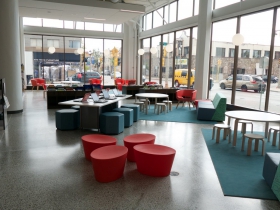 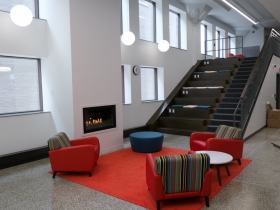 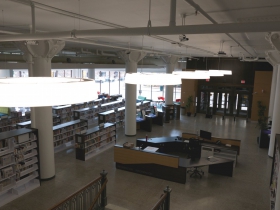 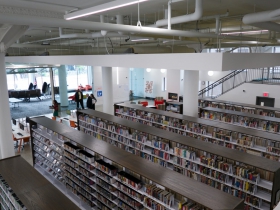 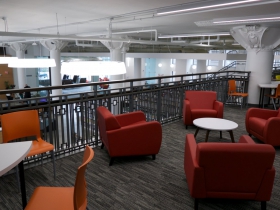