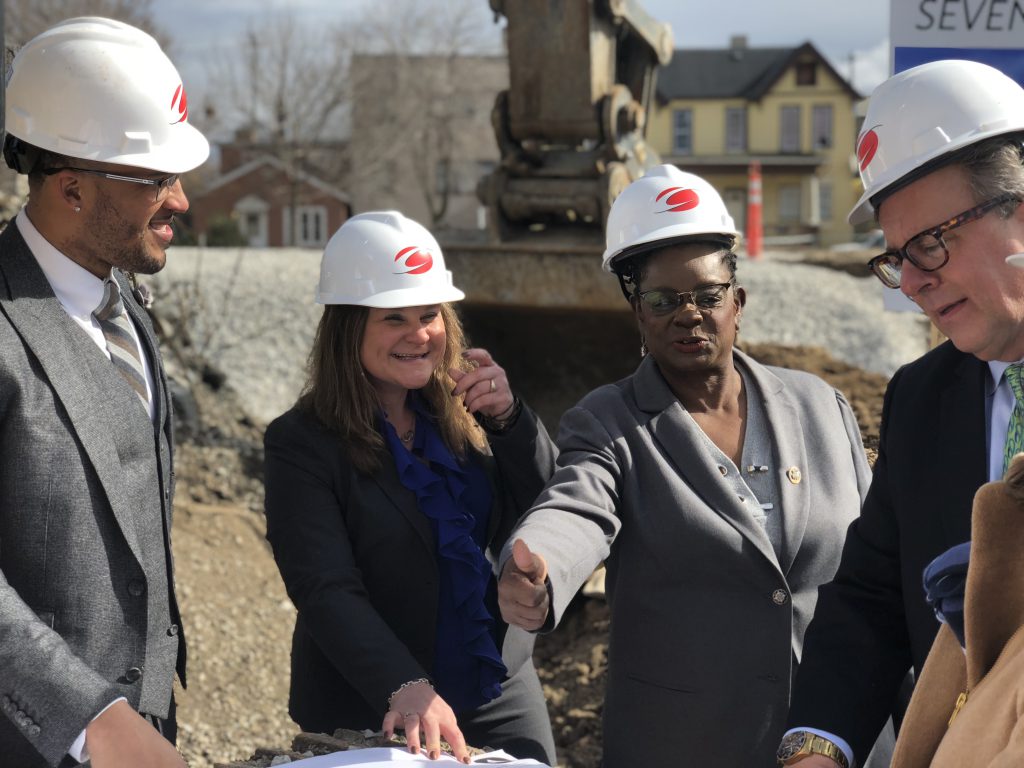 A ceremonial groundbreaking was held this month for the first-time developer’s project at the northwest corner of S. 7th St. and W. National Ave. Rule is partnering with non-profit developer Impact Seven on a 60-unit apartment building known as SEVEN04 Place.

The building will include a mix of units (with one, two and three bedrooms), spread over four floors. Forty-nine of the 60 units will be set aside for residents making no more than 60 percent of the area’s median income, with an additional two units set aside for families earning under 80 percent of the area’s median income. Monthly rents are expected to range from $328 to $1,150.

“This moment’s huge for me because the thousands of hours I have put into becoming a developer finally manifested itself in this moment,” said Rule.

Rule, an African-American, has been pursuing the project since 2015. He drew praise from area Alderman Jose G. Perez who said: “We know that the real estate development world doesn’t look like Brandon. It doesn’t look like me. This was very intentional. It was important that someone that looks like Brandon develop this site.” 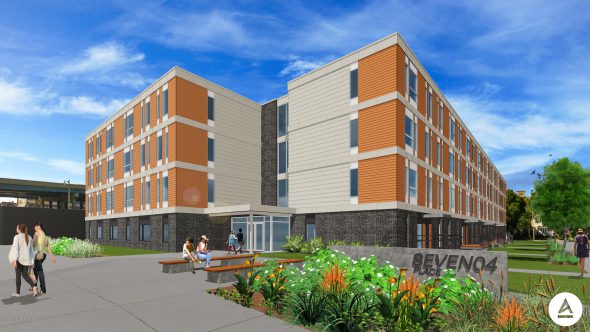 The location matters for Rule. He grew up nearby and was committed to having his first project be in Walker’s Point.

The developer is a graduate of the Associates in Commercial Real Estate (ACRE) program that has quietly created a pipeline for young, motivated minority developers. In his lengthy remarks at today’s groundbreaking, Rule said the program is as much about the training as it is building the network.

The network clearly goes beyond the classmates. One of Rule’s ACRE instructors, Chris Laurent, helped facilitate Rule’s project through the syndication of tax credits through his role at Cinnaire.

Rule received the most support from his co-developer Kristine Giornalista of Impact Seven. “Given the rapid development of this area, a huge motivation for us was to preserve affordable housing in the neighborhood,” said Giornalista.

She joked that she had independently seen the 1.75-acre site at 704-710 W. National Ave., most recently used as storage by local grocer El Rey, and originally passed on it. But then she was connected with Brandon.

Giornalista characterized her motivation as: “Brandon has a vision for developing the site, and I need to support it.” Things became complex from there. Soil testing has found heavy environmental contamination on a portion of the site that was formerly used by a dry cleaner in the 1950s and 1960s. “A significant chunk of our financing is actually going into the dirt,” Giornalista told a city committee in November.

The need to clear and environmentally remediate the site caused the developers to seek out a litany of partners.

The project partners list doesn’t stop at Rule Enterprises and Impact Seven. Catalyst Construction is building the building. Arc-Int Architecture is serving as the architect of record on the project.

Financing for the $12.6 million project gets even more complex. The project is receiving support from the City of Milwaukee via a developer-financed tax-incremental financing district ($575,000), Housing Trust Fund grant ($210,000) and HOME program grant ($500,000).

The credits are being acquired by UnitedHealthcare. Ellen Sexton, CEO of UnitedHealth Community Plan of Wisconsin, said the investment, done in partnership with Cinnaire and Minnesota Equity Fund, “is part of a company initiative to help people live healthier lives by connecting quality and affordable housing to better health.” The partners are making a series of affordable housing investments in the Great Lakes region.

Neighborworks is giving the project a $175,000 grant. The project is receiving a $750,000 grant from the Federal Home Loan Bank. The development team is also deferring a portion of their development fee.

The project was supported by initial investments by LISC Milwaukee and Forward Community Investments.

Milwaukee Department of City Development representative Maria Prioletta characterized the project’s partners as “lasagna” given all the layers.

Terms of the TIF district require the development team to have 40 percent of the project “worker hours” completed by unemployed or under-employed city-certified participants in the Residents Preference Program. Qualifying small business enterprises are required to complete 25 percent of the project’s costs.

The project, which borders Interstate 43/94, will include a 66-stall surface parking lot. That lot will border the elevated highway, with the apartments pushed as far east on the site as possible. A plaza will be constructed at the corner of the site on W. National Ave. and N. 7th St. One of the old buildings on the site is being redeveloped as an amenity space for residents.

The project is expected to open in 2019. 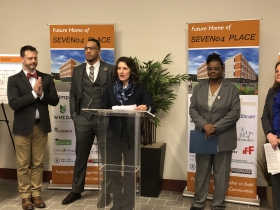 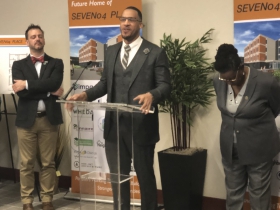 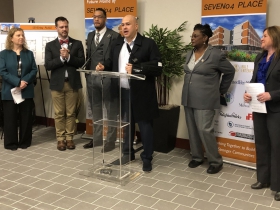 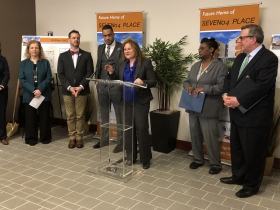 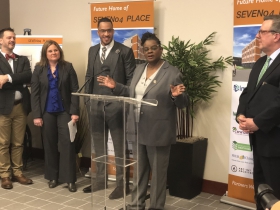 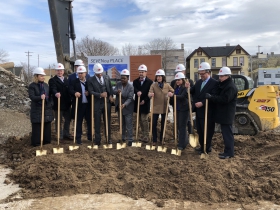 2 thoughts on “Eyes on Milwaukee: Construction Starts on SEVEN04 Place”