City’s complete overhaul of public housing “like building a small town from the ground up.” 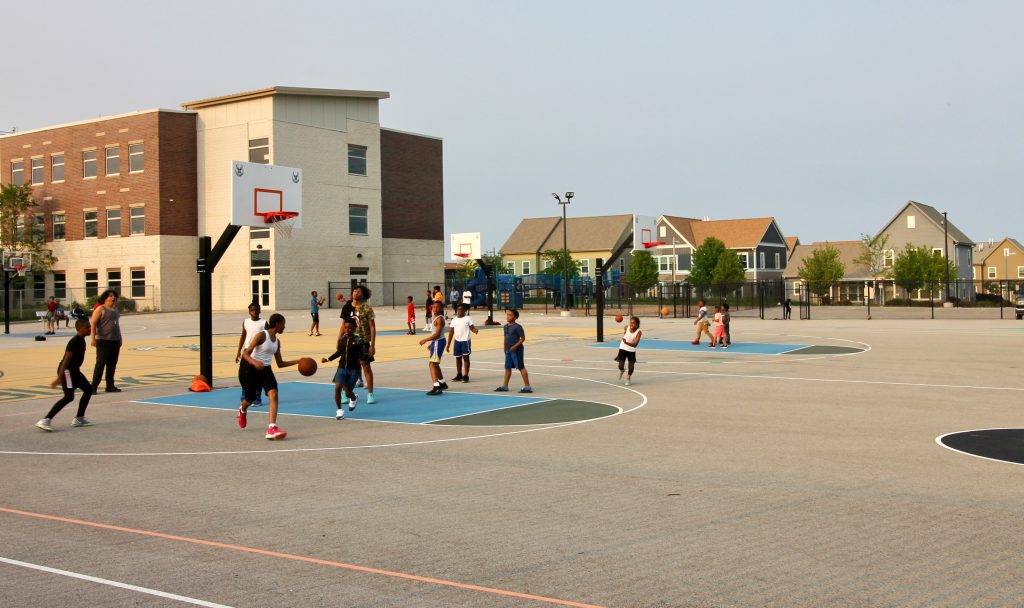 Parks and playgrounds are a vital part of the new Westlawn Gardens. This multi-sport complex at Browning School was funded by the Milwaukee Bucks and Johnson Controls. Photos by Mark Doremus/NNS.

The 75-acre site where Wisconsin’s largest public housing development once stood is roaring back to life.

About 1,000 mixed-income housing units are emerging at the new Westlawn Gardens on Milwaukee’s northwest side.

The colorful new units stand in stark contrast to the barracks-style public housing project they replace. Parks, playgrounds and a community garden are arranged to encourage residents and people from the surrounding neighborhoods to stroll, relax and get to know each other in an environment where automobile traffic is minimized.

Westlawn Gardens was one of the last stops on a month-long “Jane’s Walk” series of tours that covered all corners of Milwaukee. The annual event is named for Jane Jacobs, an early advocate of the “new urbanism” planning philosophy that is embedded in the design of the project.

“Jane Jacobs, a lot of what she wrote about really informs what we’re trying to do here in the neighborhood,” said Williams, who was the tour guide for the walk around Westlawn Gardens. “We’re trying to create a very livable, healthy, walkable, sustainable neighborhood.”

Jacobs was a writer and activist who resisted “top-down” urban planning that ignored the opinions of people directly affected by redevelopment projects.

“Jane Jacobs believed that a city is built by the people who live there,” said Michelle Kramer, director of marketing and business development for Menomonee Valley Partners and Jane’s Walk MKE communications director. “The city should be organized according to the people versus beautiful architecture and traffic patterns.”

Community input was a big part of the Westlawn Gardens planning process, Williams said. Opinions were gathered at public meetings and through a survey of Westlawn residents.

The end result was an award-winning project. Westlawn Gardens received the 2018 Secretary’s Opportunity and Empowerment National Planning Award from the American Planning Association and the U.S. Department of Housing and Urban Development. The award celebrates projects that improve quality of life for people of low- to moderate-incomes.

Anthony Carter, 55, moved into the original Westlawn project in 2007. Two years later, he learned at a residents council meeting that the entire complex would be torn down and replaced with Westlawn Gardens.

“I was just getting familiar with the people there. But they said I’d have an opportunity to move back, so that was a good thing,” Carter said.

He now lives in an apartment in the 5500 block of North 62nd Street.

“It’s a whole lot different from the old Westlawn. I felt like when I first moved in here it was like a nice hotel,” Carter said. “I have a balcony. I can sit out on the patio there. The only thing is, at the old place I had access to doing a little yard work on my own. Now they have the management that takes care of it.”

Westlawn Gardens will top out at 958 housing units, including 50 that will be owner-occupied. Phase Two, now underway, includes 30 townhomes that were recently opened as well as 60 one-bedroom apartments in Victory Manor, where veterans are given a housing preference.

Two additional buildings with 94 units are set to open later this year and early in 2020. The entire project is expected to be finished by September 2022, Williams said. The first phase of the project cost $82 million, and construction costs for the second phase are estimated at $200 million to $230 million.

“It’s all good. I got something over my head, and I can go out and talk to people,” he said. “We’re getting to know each other and know what’s going on.”

For more information about housing availability at Westlawn Gardens, contact Friends of Housing Corp. at (414) 463-3371. To learn more about the project design and construction, contact Williams at (414) 286-8267 or paul.williams@hacm.org.