State of the City speech to note a special DNC Doors Open and positive national press. 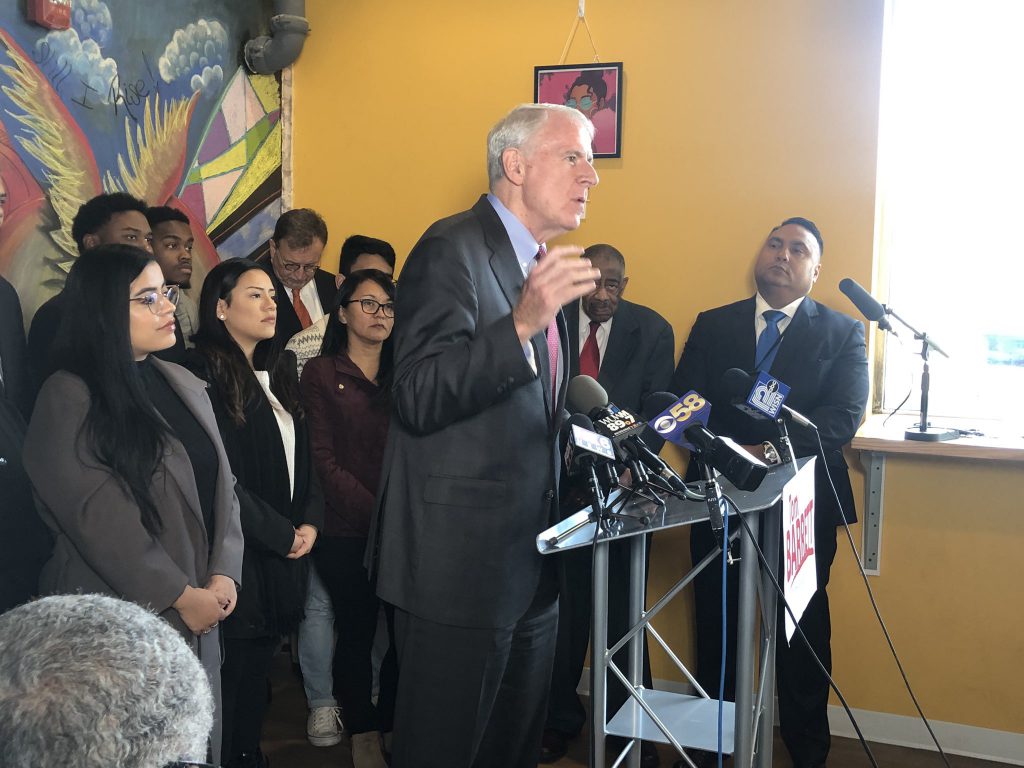 Mayor Tom Barrett‘s 2020 State of the City speech will lack the drama of last year’s speech, but Barrett is still pleased with the direction of the city and optimistic about what lies ahead.

Comparing it to a television cliffhanger, Barrett ended his 2019 speech at Fiserv Forum with a note: “Wouldn’t this be a great place to have a national political convention?”

Only the public didn’t have to wait long for the big reveal.

Shortly after he walked off stage, Barrett was pulled away from a press scrum to take a phone call from Democratic Party chair Tom Perez confirming that Milwaukee had been selected as the host city for the 2020 Democratic National Convention.

Barrett, in an interview Friday, said his 2020 speech, to be held at Potawatomi Hotel & Casino’s expanded hotel and conference center, will pick up where he left off. “This year it’s ‘wouldn’t this be a great place to host hundreds of delegates?'” Previewing his remarks, he praised Potawatomi for its strong commitment to workforce diversity and its Heart of Canal Street program.

But before the delegates roll into town in July, the public will get to see how things will look at Fiserv Forum. “We are going to host, with Historic Milwaukee, a Doors Open Milwaukee special edition,” said Barrett. “I think it is important for people in the community to get a glimpse of what’s going to be a historic event here in Milwaukee.” A final date for the event has yet to be confirmed, but the hope is that the arena, including the stage and other facilities, will be near ready for the convention at the time of the event.

The mayor’s speech will also hit on the city’s economic rebound since the Great Recession. “There are 20,000 more jobs than there was in the city 10 years ago,” said Barrett.

The city is also making progress on the affordable housing front. The MKE United effort has identified 110 lower-income, “greater downtown” homeowners that will receive financial support to pay increasing property taxes bills in an effort to prevent displacement. The effort is philanthropic and does not include any city funds. “The Greater Milwaukee Committee, the Greater Milwaukee Foundation and the Milwaukee Urban League all deserve a lot of credit,” said Barrett.

Barrett also confirmed the city is on track with his 2018 State of the City pledge to build or maintain 10,000 affordable homes in 10 years.

The mayor’s speech will also touch on early education and effort to align resources to improve outcomes. The state was awarded $10 million in federal funds to address the issue in late 2019.

“I am very much involved in putting together a group that is going to not only going to try to leverage this money, but try to get additional philanthropic and corporate money for early education,” said Barrett. The group consists of JoAnne Anton, Ricardo Diaz, Danae Davis, Synovia Moss, Tracey Sparrow and Ann Terrell. “I want to position the city to take full advantage of both philanthropic and government resources,” said the mayor.

Barrett will also mention the city’s progress on public safety, noting that the homicide rate has fallen every year since 2015 and a number of partnerships, including an innovative one to fight drug overdoses.

The mayor will also touch on the city’s lead abatement efforts, including a recent $5.6 million grant from the U.S. Department of Housing and Urban Development and the work of the Coalition on Lead Emergency (COLE).

Barrett will also tout progress on The Hop. “We’re happy,” said Barrett. That happiness extends to Port Milwaukee, with the announcement that Viking Cruises will begin using the city for turnaround service in 2022.

Barrett will also have fun with the good press the city has received over the past year.

“I’m going to end the speech reading headlines from around the nation about how great our city is,” said Barrett. He’ll have plenty to choose from. “I want people to leave the speech happy.”