42-month grant can be used for paint and soil abatement in affected homes. 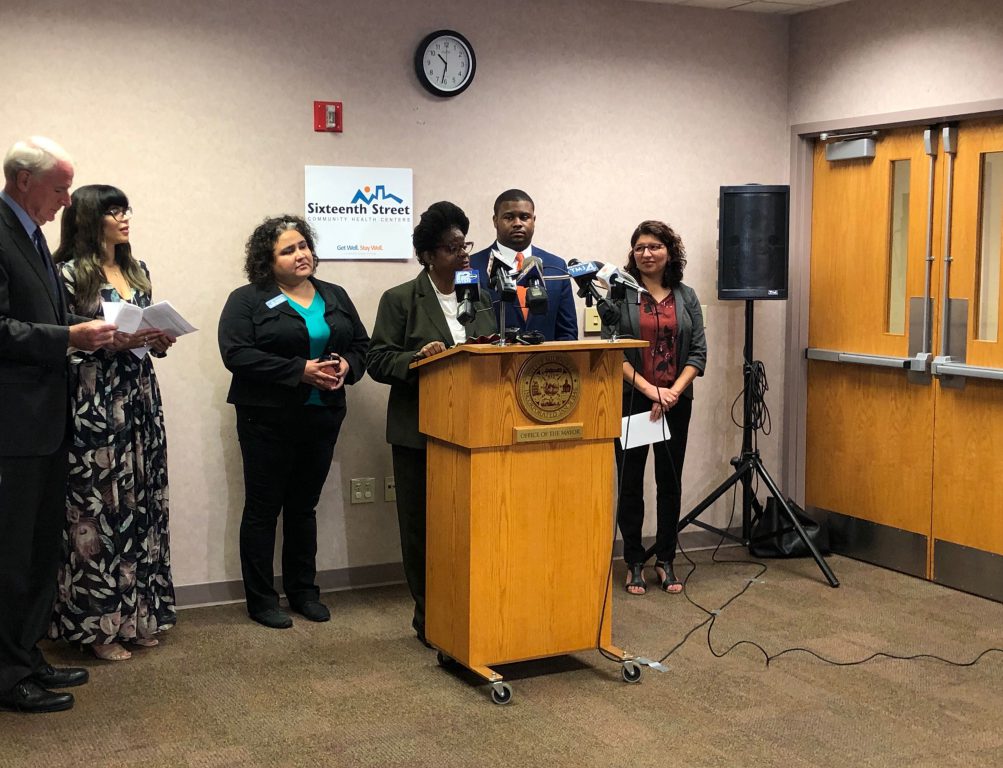 Milwaukee’s efforts towards lead poisoning prevention and abatement received a boost this week when the U.S. Department of Housing and Urban Development awarded the city $5.6 million to perform lead abatement work on an estimated 320 homes over the next three and a half years.

Mayor Tom Barrett was joined by Congresswoman Gwen Moore in announcing the news at the Sixteenth Street Community Health Centers clinic at 1032 S. Cesar E. Chavez Dr., one of the private clinics that performs blood lead level testing for children.

The grant, which comes as part of a record $319 million award to 77 state and local governments and six tribal communities, is good news for the city’s Childhood Lead Poisoning Prevention Program. The city has long relied on HUD’s Lead Based Paint Hazard Reduction Program to fund a substantial portion of its abatement work, and city officials expressed concern about the viability of receiving future funding after HUD placed the city on a stop-work order in late 2017, shortly before the resignation of then Health Commissioner Bevan K. Baker.

“What this means, of course, is after a review by the federal government, they now have confidence in our programs,” said Barrett with new Milwaukee Health Department (MHD) Commissioner Jeanette Kowalik standing by his side. The city received $5 million from the harzard reduction program and $600,000 from the Healthy Homes program.

The city has abated 17,000 properties at a cost of $66 million since 2004. Barrett’s 2020 city budget, which will soon be vetted by the Common Council, includes $21 million for lead-related work.

This round of funding will go towards abatement work at homes where children have tested positive for blood lead levels in excess of five micrograms per deciliter, the federal standard, or where other federal housing funds are being used to improve properties. Barrett said the grant would result in the creation of 40 jobs for people looking to do the abatement work.

The Mayor praised Moore’s sustained efforts to secure funding for the city, but the Congresswoman acknowledged the difficulty of the situation.

“We were in a bit of a jam with HUD,” said Moore. She said Kowalik’s hiring in September 2018 has helped turn things around in the department.

“The Health Department is considering lead a winnable issue,” said Kowalik, but more funding and planning will be necessary. “We have to have a plan,” said the commissioner as to how that would be accomplished. She said part of that includes finding more funding, while also developing an operations team of contractors and in-house staff.

The lack of contractors has been one of the problems facing MHD. She encouraged any contractors interested in the work to contact the department for more information on how they can get certified. MHD also needs new people internally. The department is hiring a new deputy commissioner following the departure of Jennifer Freiheit, a new director of home environmental health and more public health nurses.

But more still needs to be done by others according to Moore. Speaking to Senator Lena Taylor, who was in attendance but elected not to stand behind the podium, and Representatives Kalan Haywood II and JoCasta Zamarripa, Moore offered: “I want to lean on you to bring the bacon home to Milwaukee so we can go whole hog on abatement.”

Some “bacon” is on the way, with a new state Medicaid reimbursement waiver for lead poisoning prevention and abatement statewide. The state will contribute up to $2 million with the federal government contributing another $10 million. The idea is modeled after a similar effort in Michigan and was introduced in Wisconsin by Sixteenth Street Community Health Center director of government and community relations Christopher Rasch.

Finding other sources beyond the federal grants will be important for the city because the HUD funds cannot be spent on lateral replacement or water abatement.

Barrett said more help could also come from the proposed one percent sales tax. He said part of the proposal could include a requirement that seven percent of the proceeds be spent on public health in each of the Milwaukee County communities. He said that would create a $11.2 million annual revenue stream that could be spent on lateral replacement for the over 70,000 lead laterals in the city or lead paint abatement. Barrett said that dedicated revenue stream would encourage more contractors to get involved and could drive down costs, which were estimated at approximately $750 million in 2018 to replace every lead lateral.

Representative Haywood has also authored a bill with Senator LaTonya Johnson that would provide $40 million in forgivable loans to cover up to 50 percent of the cost of replacing the private-side lead laterals for homeowners or municipalities. The program could fund approximately 13,000 lateral replacements across the state. Haywood told Urban Milwaukee it is likely to have its first hearing this week. It would expand a pre-existing program.

The city through its various programs, including mandated replacement of the entire public and private lateral in the event of a break, expects to replace approximately 1,000 laterals this year.

The city’s grant application was authored by grant administration director Steve Mahan and Angela Hagy, MHD’s director of data and evaluation. Hagy at multiple points has stepped in to manage the city’s lead abatement efforts and until recently served as the director of disease control and environmental health.

The cities of Lynn, Massachusetts, Baltimore, Maryland, Detroit, Michigan, Cleveland, Ohio, Lancaster, Pennsylvania, Houston, Texas as well as of the Rhode Island Housing and Mortgage Finance Corporation were the only entities to receive more than Milwaukee, each receiving nearly $10 million. Approximately 20 entities received the same $5.6 million Milwaukee did. Milwaukee was the only Wisconsin city or county to receive funding.