The Huron Is All About Connectivity

Building is the anchor of a transformation of Downtown's parking ghetto. 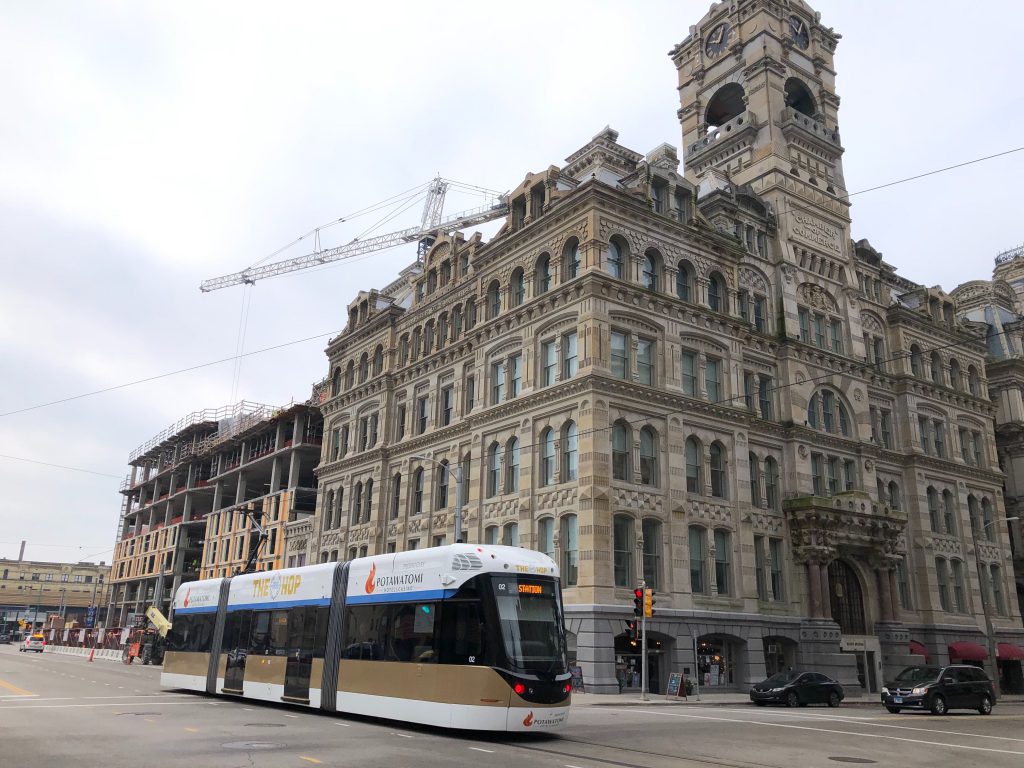 The Mackie Building and Huron Building with a passing streetcar. Photo by Jeramey Jannene.

Clybourn Street has long served as a lengthy freeway on-ramp through downtown Milwaukee. And in recent decades, you weren’t missing much if you sped down the three-lane, one-way street. Clybourn, stretching from the lakefront to the Marquette Interchange, is almost entirely lined by parking structures or surface parking lots with the elevated freeway casting a shadow from the south. But that’s quickly changing.

The anchor of the transformation is the Huron Building, an 11-story office building under construction at 511 N. Broadway. To its east a three-hotel complex is rising along N. Jefferson St. To its west, Rexnord’s corporate headquarters is being carved out of a dated office building and a new Cambria Hotel has opened. All of the projects involve developing a surface parking lot or redeveloping a parking structure.

But the $60 million Huron project is significant for anchoring more than an east-west link through Downtown. The new building will serve as a link between the Historic Third Ward to the south and East Town to the north. Increasing property tax revenue from the development will be used to fund a lighting-focused streetscaping project under Interstate 794 to further build a bridge between the Third Ward and Downtown. Additional incremental revenue, through a tax incremental financing district, will be used to revamp Pompeii Square along N. Jackson St., just south of E. Clybourn St.

Visually, it will also provide connectivity to the historic district in which its located. The new building’s facade will use stone from the same quarry that the adjacent historic Mackie Building, known for its Grain Exchange room, used.

“What’s beautiful about the Mackie Building is it’s imperfect,” said Engberg Anderson Architects principal Tim Wolosz in October as he described to the Historic Preservation Commission how the two buildings would be in harmony.

The common link between the two buildings is developer Joshua Jeffers and his firm J. Jeffers & Co. The developer redeveloped both the adjacent Mackie and Mitchell buildings and is now leading the Huron project.

But you’ll have to imagine that connection today, as work on the Huron Building has quite a ways to go before its summer 2020 opening. Looking at the two buildings today reveals a historic structure looming over a rising concrete hulk. That will change as the facade of the new building is installed.

And while the new building replaces a surface parking lot, it won’t eliminate parking. The first five levels, easy to spot by a sidewalk architect because of their shorter floor height, will be used for parking and street-level commercial space, while the six upper floors will contain office space.

Many of those parking spaces will be used by the building’s anchor tenant, law firm Husch Blackwell. The firm will lease 71,000 square feet for 180 employees in the building.

Construction on the project is being led by Stevens Construction, which can use the project and its work on the neighboring hotel complex as a billboard for Madison-based company’s growing Milwaukee presence.

The construction comes after a four-year design process that included the project going from a conceptual plan to a seven-story apartment building, then a nine-story office building and finally an 11-story office building. Jeffers’ team also had to appear before the historic commission to secure changes to the building’s balconies and facade design after construction started. With the exception of The Couture, which if built would be a capstone to transforming Clybourn Street, it’s perhaps the most publicly-vetted project in recent Milwaukee history. 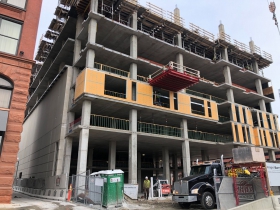 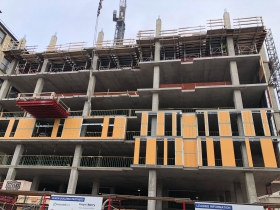 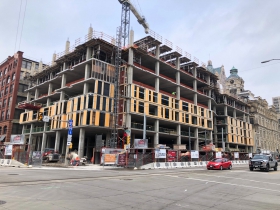 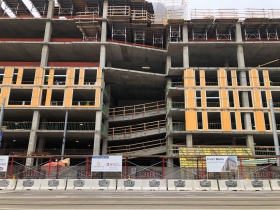 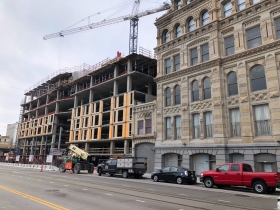 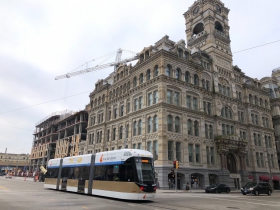 One thought on “Friday Photos: The Huron Is All About Connectivity”