Seven-story building proposed for the heart of downtown in historic district. 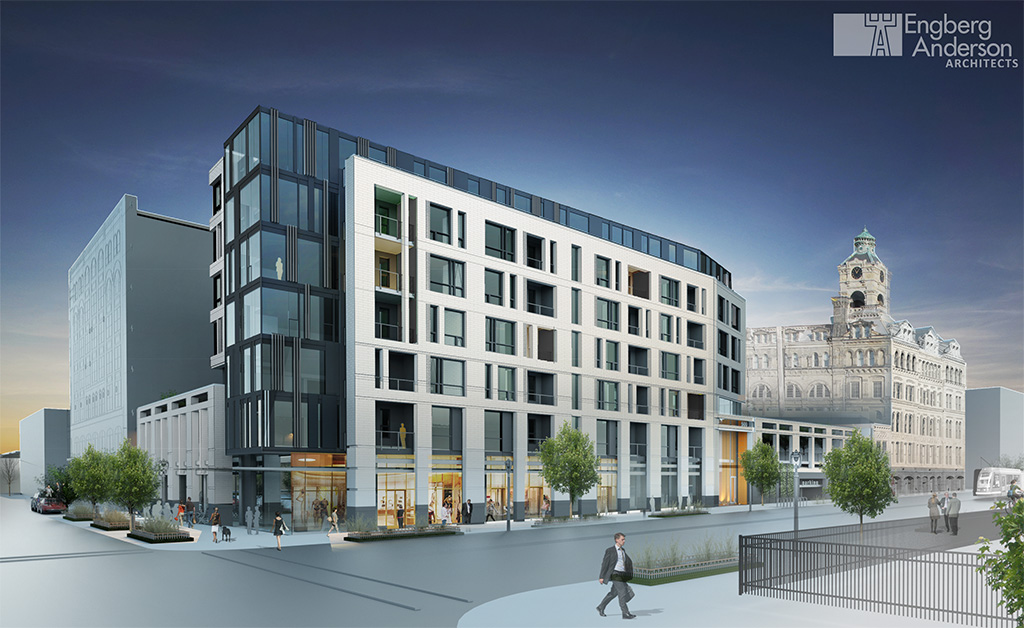 Developer Joshua Jeffers has secured conceptual approval for a seven-story apartment building from the Historic Preservation Commission. The proposal, which would include a mix of apartments and office space, was required to go before HPC because it is being built in the city-designated East Side Commercial Historic District.

“This is a project we have been working on several years,” Jeffers told the commission. J. Jeffers & Co. would develop the $32 million building to connect to the rear of the recently restored Mackie Building. In recent years Jeffers has acquired a substantial portion of the block, restoring the Mitchell and Mackie buildings to their former glory. The new building would also provide parking for the Homewood Suites Hotel which opened this week just west of the proposed building.

Historic Preservation Commission staffer Tim Askin walked the commission through the proposal and his office’s critique of it. The building includes parking and commercial space on the first floor, with the floors above making an S-shape. This shape allows for sight lines and natural light to be preserved for both Jeffers’ Grain Exchange Room in the Mackie Building and Bear Development‘s Homewood Suites in the Button Block. The empty space atop the first floor would be used as courtyards for building residents.

Askin was critical of the building’s design. “This proposal needs to address how it will stand apart from other recent proposals in the city,” Askin told the commission. He compared the proposal for 511 N. Broadway to the Park 7 Lofts and Griot projects, both of which are being designed by project architect Engberg Anderson Architects. Askin’s report concluded with a request that the commission hold the proposal so Jeffers can provide more detailed descriptions of materials to be used and make a series of other adjustments to the building’s design.

Jeffers told the commission “I love this design. It’s intended to be modern. As Tim mentioned, it has this jog to it, which is why we call it the S Block. The intention there is we wanted to create these view corridors.”

“A huge part of our goal here is to create more connectivity with the Third Ward… We are really hoping this becomes a much more walkable, urban environment,” Jeffers said.

He told the commission that while his company’s currently in discussion with a potential tenant for the office space, that portion of the project is being designed in a way that it can be built as apartments should the deal fall through.

Similar to his proposal for the St. James Episcopal Church, Jeffers is up against a deadline. He owns two of the three lots that make up the site, with the third being owned by architect David Uihlein. Jeffers would acquire the lot as part of a land swap, and due to regulations governing such swaps, has until January 6th to complete the transaction.

Uihlein, who owns nine properties in the historic district, is imposing a deed restriction as part of the swap that will require any development to match the proposed footprint and massing of Jeffers’ proposal. With the deadline looming, Jeffers told the commission he was only looking for conceptual approval so he could acquire the site with confidence the building could be built.

Uihlein was present and spoke in favor of the proposal. “I am going to respectfully disagree with Tim about this. I think the window geometry is appropriate as it relates to the Mackie.”

Then came the commissioners weighing in.

Area alderman Robert Bauman indicated he was generally supportive of the concept, but said if the proposal was before the Historic Third Ward Architectural Review Board it wouldn’t be approved because it wasn’t far enough along. In particular he requested more details on a portion of the building set back from the street (shown as a gray mass in the renderings).

Commissioner Ann Pieper Eisenbrown supported the concept, but raised concerns about a portion of the south facade nearest to the Button Block building, stating “I know Engberg Anderson is capable of so much more.”

Patti Keating Kahn, who owns the nearby Railway Exchange Building, praised the project. She stated “it’s just what Milwaukee needs, juxtaposing a modern structure with the historic structure.”

And commissioner and architect Marion Clendenen-Acosta brought the whole thing together. “It seems like you have enough information to know that we’re agreeing with many aspects,” she said.

With all of that offered, Bauman moved to conceptually approve the building, requiring the building to come back for a final, detailed approval. It can next be considered at the commission’s January meeting.

4 thoughts on “Eyes on Milwaukee: The “S Block” Conceptually Approved”