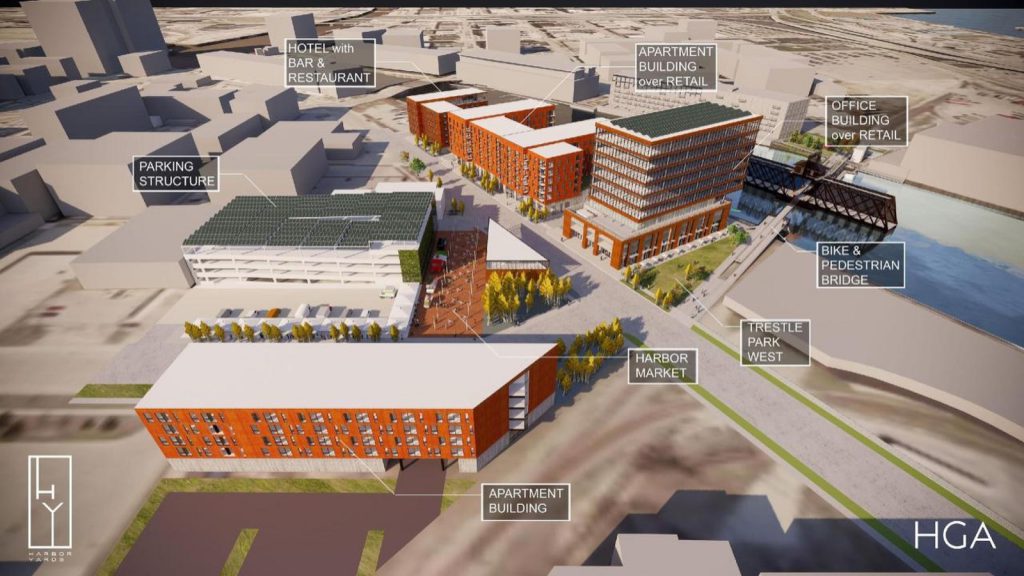 The Mandel Group has unveiled a new vision for an entire mixed-use neighborhood on a 4.25-acre swath of land it owns in Walker’s Point. And the company believes it can break ground in the next 12 months.

The plan, updated for the third time in as many years, would have the real estate firm converting a series of parcels along S. Water St. and E. Florida St. into two apartment buildings, a hotel, office building, market square and new park. A pedestrian bridge over the Milwaukee River would also be included.

“We’ve reimagined the overall design from the sidewalk up, not the roofline down. The pedestrian experience and day‐to‐day vibe of this neighborhood is of tantamount importance to its long‐term success,” said Mandel chief operating officer Robert Monnat in a release.

The development firm envisions a 150-room hotel, six-story, 150-room apartment building and 10-story, 93,000-square-foot office building built along the river with a new segment of the Milwaukee RiverWalk. The latter two buildings would include street-level commercial space. Additional development, including another apartment building and a parking garage is planned along E. Florida St.

Each of the river-fronting buildings would cantilever over the riverwalk, a design feature intended to evoke the imagery of cargo cranes.

“It’s a nod to the nautical design vocabulary of crane structures that populate major seaports” said HGA principal Jim Shields who is serving as the project’s architect. “Historically this site was a major intersection of cargo arriving and leaving the city via Great Lakes schooners, which transferred to or from trains which in turn connected to the broader marketplace served by the City of Milwaukee.

Mandel will have to contend with that legacy as it prepares the site for development. The long-disused grain elevator along the Milwaukee River will be demolished, with the foundation being reused for the new office building. Mandel anticipates bidding out that work shortly with work starting this winter. Reusing the substantial footings that support the silos will shave months off the construction schedule. “We designed the office building to sit right on the footprint of the grain elevator,” said Monnat in an interview.

The Wisconsin Cold Storage complex along E. Florida St. will also be demolished, with the company determining it could not support new uses without a new steel superstructure being built inside. The building’s historical use as a cold storage facility does not lend itself to adaptive reuse said Monnat, who cited low floor-to-ceiling heights, a lack of windows and other structural issues. “There is no good reuse option there unfortunately,” concludes Monnat.

But clearing the site and replacing it with a parking garage will lead to better design of the buildings on the river. The riverfront buildings will be better connected to the river itself and will lack the extensive parking pedestals placed at the base of most new buildings. Monnat said that building the garage also is cost-effective because it allows the stalls to be shared by the different users.

Restaurants and other entertainment venues are planned along the riverwalk, as well as on the hotel’s rooftop. “This plan creates a series of streets that connect the Riverwalk to South Water Street, which opens up the riverwalk and connects it to the city rather than hiding it behind longer buildings,” said Monnat. “Having these multiple points of activation will add to the viability of each business that locates on the riverwalk while giving patrons a chance to visit several different entertainment destinations in a single area.”

The firm envisions the mix of uses creating an active environment seven days a week, similar to what the firm has created at The North End and East Pointe developments on the other end of Downtown.

The development, known as Harbor Yards, would be built in phases. The apartment building and hotel are expected to come first.

Mandel has specifically targeted riverfront property with most of its Milwaukee projects, including a number just across the river in the Historic Third Ward, but believes this site is even better. “It’s the best river frontage we’ve been able to assemble in the last 20 years,” said Monnat.

A “harbor market” and events space would be built along E. Florida St. The firm has determined the space is not buildable without an economically infeasible investment in relocating utilities leftover from when E. Florida St. was relocated a few yards south in the 1970s.

“We found a really interesting alternative use for the area that will lend value to the overall development,” said project manager Elizabeth Adler. The market square component will be designed to support farmers markets and other outdoor events. An events area, designed to support tents, and food truck plaza will be built adjacent to it. All of the spaces will be supported by a cafe structure.

“We see it as a great way to create a sense of neighborhood, providing the venue that the neighborhood can embrace and activate in a variety of ways,” said Adler.

The company envisions the approximately one-acre rooftops of the office building and parking structure could be used for solar panel installations. The developer intends to seek Leadership in Energy and Environmental Design (LEED) and Fitwel certification for the office building.

The firm anticipates applying for brownfield grants and other environmental remediation funding opportunities to prepare the site for development. As is standard with riverwalk construction, the city and developer would partner on the cost of building the publicly-accessible riverwalk. Monnat said the firm has had very preliminary conversations with the city regarding the project.

The development would be located at the north end of Walker’s Point, in what is now branded as the Harbor District. The area is going through a development boom with Komatsu and Michels each building major new corporate facilities, including a large factory for the former. Wangard Partners is planning a significant new apartment complex at the south end of the district near Michels’ development. The Harbor District, a non-profit organization focused on equitably improving the area, also celebrated opening a new park, Harbor View Plaza, at the east end of E. Greenfield Ave. in late July.

An earlier plan for the Harbor Yards site included a substantial amount of office space. 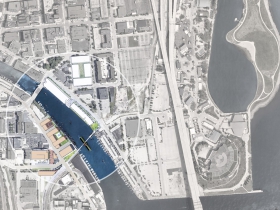 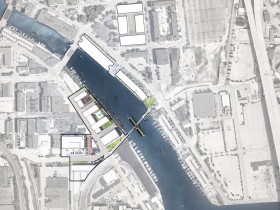 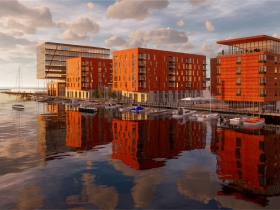 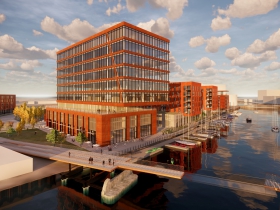 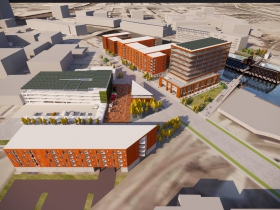 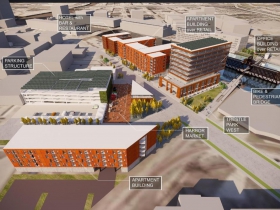 Mandel is working with former Wisconsin Foodie television show Kyle Cherek host on curating the food and beverage components of the development, which is planned to include at least four commercial spaces likely to be restaurants or bars.

“Food and beverage is the one thing that really makes a neighborhood,” said Monnat. The firm will leverage Cherek’s connections to identify possible restauranteurs or even food or beverage producers with a retail component.

“He knows everyone in food,” said Monnat about Cherek. The industry expert is also consulting with Mandel on its other developments, including the firm’s Six Points development in West Allis.

The signature public amenity in the development would be the creation of Trestle Park West. The new park and retractable pedestrian bridge would connect with the city-owned Trestle Park on the east side of the Milwaukee River that the company worked to create alongside the development of the DoMUS apartments in 2018.

“It’s a public infrastructure component that is going to take a lot of cooperation from a lot of people,” said Monnat. He characterized the effort as aspirational and a win for both sides of the river. “There is not any profit motive in this piece.”

The bridge, retractable on one side to allow boat traffic, would allow pedestrians and cyclists to connect safely from Walker’s Point into the Historic Third Ward and Downtown and the lakefront without having to navigate busy city streets. It would bisect the long-dormant railroad swing bridge owned by Union Pacific. “Once you fix this pinch‐point, and then extend the KK trail at the south end of the Harbor District, you have a spectacular, safe lakefront bike and pedestrian pathway experience for well over 20 miles,” said Monnat. 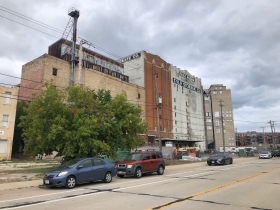 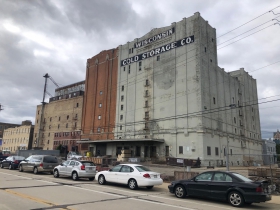 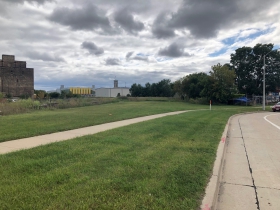 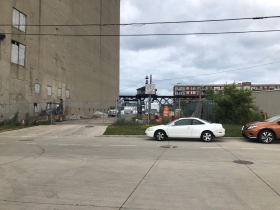 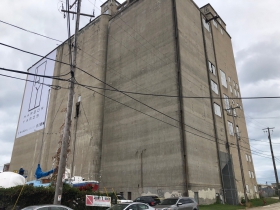 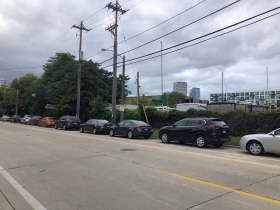 One thought on “Eyes on Milwaukee: Mandel Plans Huge Project in Harbor District”