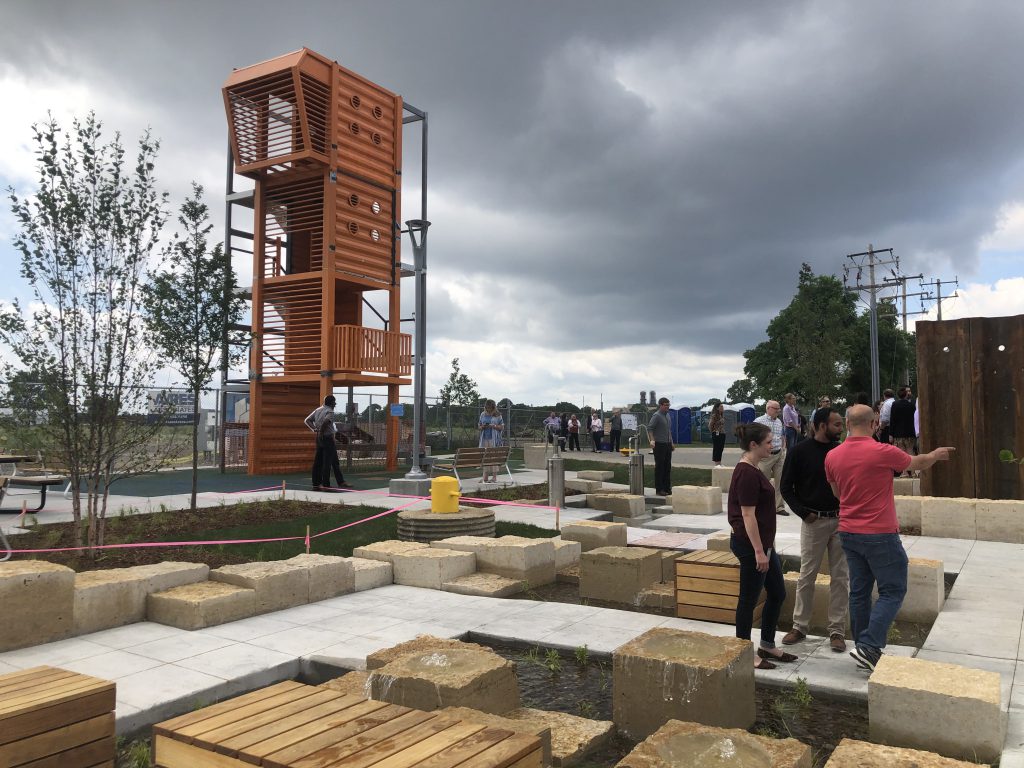 Located at the east of Greenfied Avenue, the park overlooks Milwaukee’s harbor and is intended to merge the heavy industrial presence of the port with the thousands of Walker’s Point residents that live within blocks of Lake Michigan, but have no direct access to the water.

The non-profit Harbor District, which has its offices in the adjacent UW-Milwaukee School of Freshwater Sciences building, led the effort to build the $1.5 million park. “This is a spot that probably 10,000 years ago people came here and thought it was a good place and they’ve stayed ever since,” said Harbor District executive director Lilith Fowler at a Monday morning ribbon-cutting ceremony. “I would say in the ups and downs this place has seen in the last 10,000 years, we are squarely on an up.”

The area is certain to see lots of change in the coming years. Komatsu Mining will build a manufacturing campus just southwest of the site starting next spring. Michels Corp. is building a new mixed-use neighborhood further south. Wangard Partners is planning a new apartment building along the Kinnickinnic River.

But it’s the area’s longtime anchor that is the park’s biggest sponsor: Rockwell Automation. The company contributed $600,000 to the park’s development and in turn helped create an amenity for not only the neighborhood, but the thousands of employees in its corporate headquarters. Chief Executive Officer Blake Moret said the publicly-traded company is not only focused on its bottom line, but on attracting and retaining employees. “Harbor View Plaza is just one more way Milwaukee is demonstrating its onward effort,” said Moret. The CEO was joined by a couple hundred people, many of which sported Rockwell badges, at the ceremony.

The plaza, which includes a 40-foot-tall lookout tower and slide made out of shipping containers, a public kayak and canoe launch, water features for kids and adults to play in, sculptural gates depicting native fish by artist James Stearns and seating to watch the activity in the port, is intended to be a signature element in an extension of the Milwaukee RiverWalk that will run from the Historic Third Ward to Bay View. The site was identified as a key site for public space in the 2018 Harbor District Water and Land Use Plan.

Harbor District board president and UW-Milwaukee architecture professor Carolyn Esswein said the hope is that future generations will identify the plaza as their favorite childhood park and a great place to spend time.

It’ll have tough competition. The new park is the second in as many years in the area, with Trestle Park in the Historic Third Ward also seeking to connect the city to the water and link the city’s industrial heritage to its future.

But those involved with the Harbor District are bullish on its chances and the broader initiative to transform the area.

“What is happening in the Harbor District is one of the powerful examples of what can be done with a public-private partnership,” said Michels Corp. chief legal officer David Stegeman. The attorney leads the Harbor District business improvement district board, which is responsible for park maintenance. “The way you see it today is the way you will see it a year from now and 20 years from now.”

Department of City Development Commissioner Rocky Marcoux said the Harbor District, like the Menomonee Valley before it that Fowler was also part of, will be recognized as an international model for redevelopment. The city was involved in helping form the Harbor District non-profit in 2014.

Fowler offered high praise for Harbor District planning manager Daniel Adams who managed the project, saying she would recommend him to any non-profit starting up. Adams worked with park architects Ayres Associates and Quorum Architects on the design and Altius Building Company on the construction. He also coordinated the myriad of donors that made the park possible.

Through a tax-incremental financing district, the city contributed $300,000 to the park. Philanthropist Lynde Uihlein, who can trace her family’s history to the founding of Rockwell Automation predecessor Allen Bradley, contributed $250,000 through the Brico Fund. A number of other funders are cited on a piece of dockwall adorned with metal fish recognizing the donors.

The dockwall also includes a memorial for Annamelia Hernandez. The two-year-old tragically died alongside her pregnant mother and mother’s boyfriend during a police pursuit on New Year’s Eve that ended when the boyfriend drove the vehicle through the site and into the harbor. Hernandez’s family was in attendance at the event and Fowler, switching back and forth between English and Spanish, held a moment of silence in her memory.

Want to climb the tower and go down the slide? You’ll have to wait a few weeks. While the park is open, the tower is still in the process of being completed by the Milwaukee-firm Containers Up. 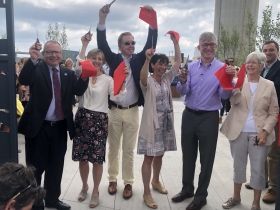 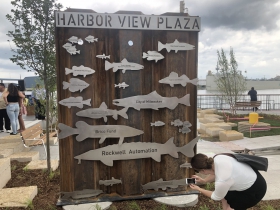 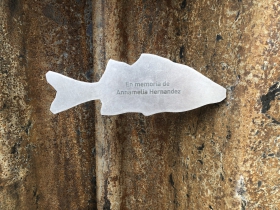 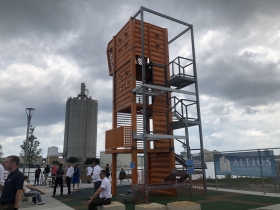 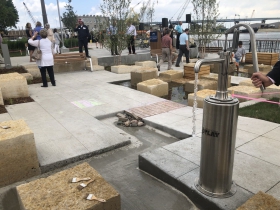 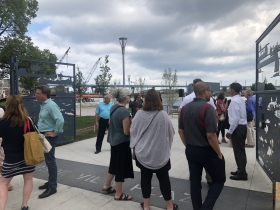 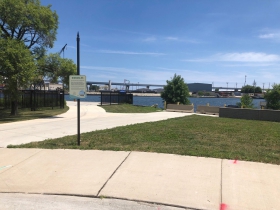 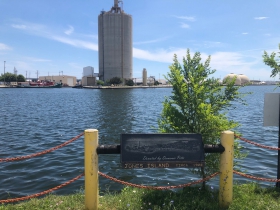 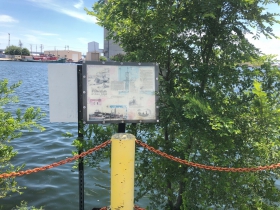 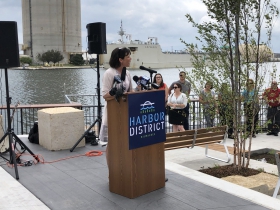 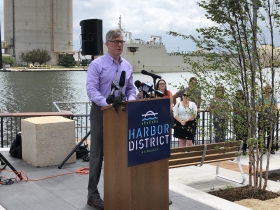 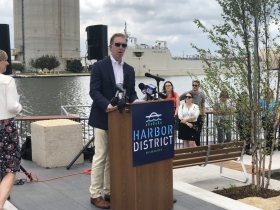 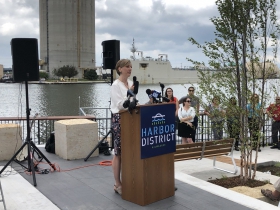 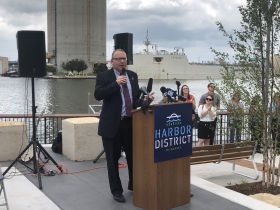 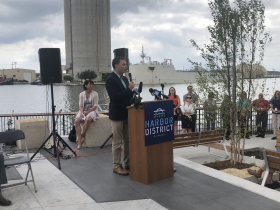