Inside the DoMUS Apartments 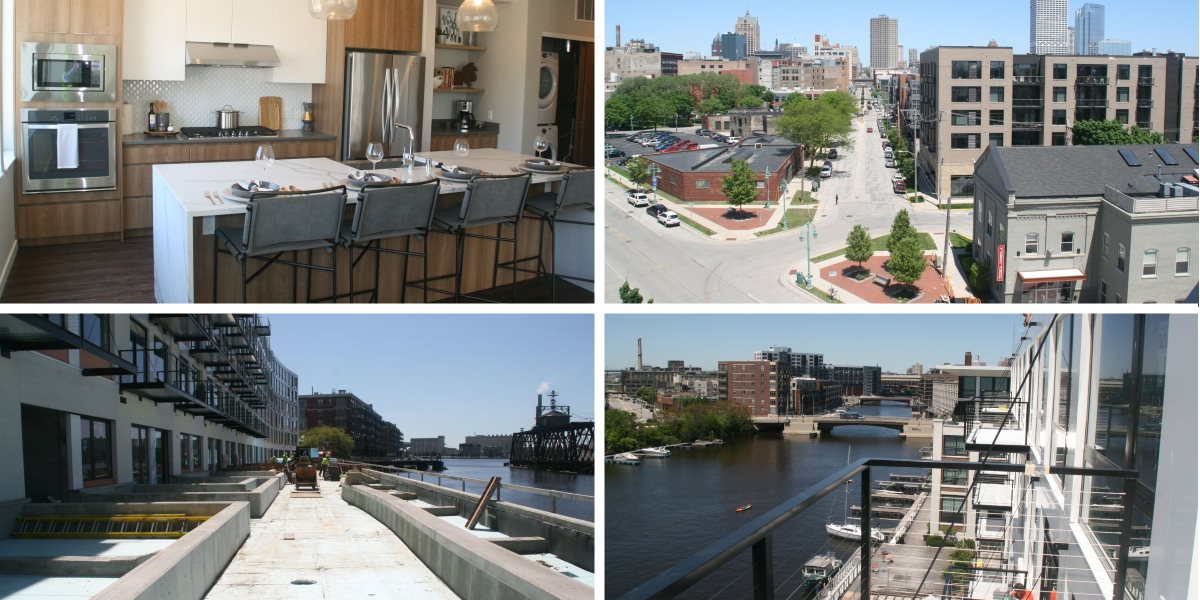 The boom in apartment development has been largely defined by new high-end units raising expectations for what to expect in rental housing, but a new project in the Historic Third Ward seems poised to raise the bar to even higher levels. Dubbed DoMUS, the name for the 132-unit project is “a loose derivative of a term used to describe luxury homes in ancient Rome” according to the building’s developer the Mandel Group. The building, which will partially open on July 15th, is located at 401 E. Erie St. along the Milwaukee River and boasts a large array of in-unit upgrades versus the standard new apartment.

The six-story building has a bifurcated setup according to Mandel Group vice president Andy Wiegman. During a tour of the site, Wiegman detailed how the firm has divided the building into the 46 larger, premium “Sterling” package units that are in the corners and top two floors and 81 “Signature” package units. In addition, five one-bedroom “Portside” units include front doors along the Milwaukee RiverWalk and a 350 square-foot private deck.

During a tour of the building Wiegman shows me a soft close toilet seat. It’s one of those things you didn’t even know existed, or that you wanted, until you see it. Drop the seat from an upright position and it doesn’t slam, instead smoothly falling to the horizontal position. Wiegman notes “it’s in the realm of trying to think of everything that is a convenience or upgrade.” And while no one should be renting an apartment because of a toilet seat, the soft close seat speaks volumes about Mandel’s attention to detail. It’s one of many upgrades found in the Sterling units.

All of the units include quartz countertops, Whirlpool appliances and York HVAC systems. In addition every apartment includes a fully vented hood, a rarity for apartments, that are designed to improve air quality in the units, or at least kept things from smelling when someone burns their dinner.

The Sterling units build on the standard Signature package in a number of subtle ways beyond simply being larger. The quartz countertop islands include quartz that wraps two of the sides and runs to the ground. The windows become fully floor-to-ceiling on the top two floors. The kitchen cabinets, which in every unit feature a smooth hardware-free design, run nearly from the floor to the ceiling. A countertop stove is broken out of the typical oven, stove, microwave stack found in most apartments. The walk-in closet doesn’t have any wire shelving. Walnut doors are included throughout. The bathrooms feature an upgraded GRAFF-designed vanity. The bathroom mirrors are backlit by LEDs. Wiegman shows me that they also relocated the shower control valve to the other side of the shower, a small thing involving a little extra piping that is designed to prevent you from having to soaked in cold water when you turn the water on.

The building has a number of other planned enhancements. A custom-designed carpet is coming for the hallways with a pattern that will follow the curve of the building. In addition, Wiegman notes that Mandel pushed project architect HGA to shorten truss spans in the building because the firm has found the shorter spans transmit less noise between floors.

One truly unique aspect of all of the units is wood shelving from Milwaukee-based Wudeward. The firm sourced the wood from city’s forestry department.

The Signature units, while not boasting all of the premium finishes of the Sterling units, are nothing to slouch at. They have virtually all of the finishes and features found in the other new high-end apartments in the city, including Mandel’s massive Lower East Side development The North End.

Should you ever find yourself wanting to leave your apartment, the first floor includes a club room with gourmet kitchen. Large TV’s and soft seating will be included in the room, as well as a table for 12. Tenants will be able to reserve the space for private events.

Residents will also be able to take advantage of an unusual partnership to leverage an in-house gym. Vita Physical Therapy and Fitness will move into the building’s first-floor. They’ll have a private space with a number of break-out physical therapy spaces. But Vita will share a 1,000 square-foot space fitness center along the riverwalk with building residents. Residents will have round-the-clock access to the space, but Wiegman notes they’ve observed their other apartment gyms are used most often in the evening when Vita anticipates fewer customers. Users of the space will be able to bring fresh air into the space by opening the collapsible NanaWall system that turns the floor-to-ceiling windows into an open window.

When they broke ground, Mandel noted that the larger Sterling units are targeted at “empty nesters who have been substantially underserved by the current wave of apartment building.”And anecdotally at least, that’s how things have gone when it comes to actual leasing.

Leasing has been going well for Mandel. All of the corner units have signed leases. Customer preference has been evenly divided between those who want city views and those who want river views. Because of the angled street grid and setbacks of other nearby buildings many of the northern facing units have great skyline views. Life along the river isn’t bad either, with the building perched at at a bend in the Milwaukee River that affords long river views. River-side residents get the added benefit of a view of the iconic railroad swing bridge that dates back to 1915. 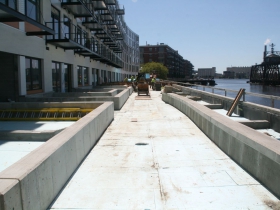 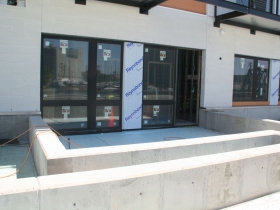 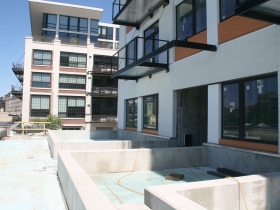 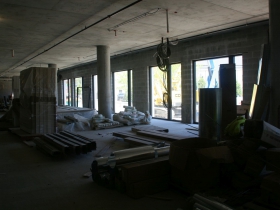 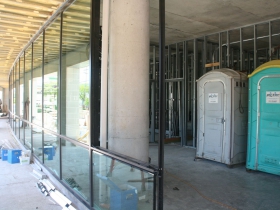 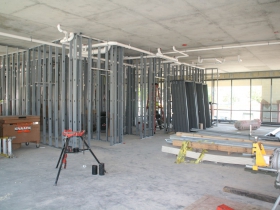 A Long Road to DoMUS

Getting to this point wasn’t easy for the Mandel Group. The firm had announced DoMUS a 61-unit condominium development for the site in 2006; a version of the project which ultimately fell victim to the housing market’s crash and associated recession. From 2011 until 2015 the word on the street was that the firm was close to breaking ground on apartments on the site, but even that didn’t seem real until shovels actually hit the dirt in February 2016.

The site for DoMUS and a number of the lots around it were formerly home to a Wisconsin Gas plant that manufactured gas from coal and oil until the 1950s. With the soil contamination from that, the Wisconsin Department of Natural Resources and We Energies (which is the successor to the former plant’s owner) created a remediation plan and installed air quality monitoring devices to track any changes during the construction process.

When complete the project will include a new 450 foot-long segment of the Milwaukee RiverWalk. As is standard practice, the city contributed to the construction costs of the riverwalk segment in exchange for a public access easement. The city is contributing $295,000 from a tax-incremental financing district to finance the riverwalk, which will be repaid with property taxes from the project.

CD Smith is leading the construction of the building. Financing for the project is being provided by Old National Bank. The architect, Jim Shields of HGA Architects & Engineers, is intimately familiar with the site. HGA’s offices are immediately west of the site in Mandel’s Marine Terminal Lofts condominium development.

Business is good for HGA, and they’ll soon be expanding their presence in the condominium building. This is a double-edged sword for Mandel. Growing tenants are a good problem for landlords, but in this case it will necessitate Mandel moving their offices from the neighborhood they’ve helped grow to the 330 Kilbourn office towers in East Town. The firm plans to move back to the area once they can find an anchor tenant for an office building they’re proposing just across the river in Walker’s Point.