Is an “Art Island” Possible?

Art Milwaukee’s idea to transform a RR swing bridge is intriguing but has hurdles to overcome. 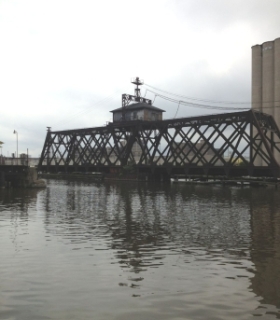 Originally built nearly a hundred years ago, the old swing bridge on the Milwaukee River in the Historic Third Ward plainly isn’t the hot spot for locomotives that it once was. It hasn’t been for quite a while. Jeremy Fojut, President of Art Milwaukee, sees this virtual abandonment as an opportunity to expand Milwaukee’s art community by repurposing the swing bridge into a public, art-oriented space that he has tentatively dubbed “Art Island.”

“About a year and a half ago, I was kayaking down the river and just thought ‘What if?’” Fojut says. The idea he hit on was to take the vacant, 243-foot long, 32-foot wide, nearly 800-ton swing bridge and convert it into a linear park complete with green space, public art and studios for artists.

“The bottom part would be a linear park where people could do art,” Fojut says. As for the control room that sits on top of the bridge, he envisions, “Stairs would lead up to studio space and deck space where people could just go enjoy themselves.” That space, in short, could be enjoyed by the general public in the same way one would enjoy any park.

Fojut sees the project as cool addition to not only the Third Ward, but to the city. “Anytime you can take something not in use and make it a community asset is a positive,” he says. Art Island could become a unique landmark that could draw attention from both residents and tourists.

Historic Third Ward Association Executive Director Nancy O’Keefe echoes the sentiment. “I always thought it should be used for something,” she says, “and I think it could be a very unique spot for the Third Ward.”

However, there are still many questions and concerns regarding the project.

First, there is the concern the bridge is in disrepair and will not turn anymore. According to a recent Journal Sentinel article, it has not been used in a decade. If the bridge needs repair, then the obvious question of funding comes up, noted by Fourth District Alderman Bob Bauman, whose district includes the Third Ward. 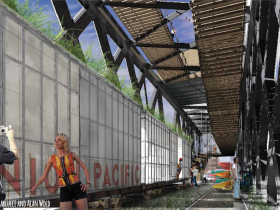 “If it does require rehab,” Bauman asks, “who will pay for that?” Bauman considers the Art Island, conceptually, an outstanding project, but he notes there are “technical hurdles.” Fojut and Art Milwaukee have not begun considering any kind of fundraising strategies thus far, which leaves a large question unanswered.

Union Pacific owns the bridge today. In addition, arrangements would have to be made with the United States Coast Guard regarding any potential plans to change the bridge’s use because of its location within, and possible obstruction of, a navigable waterway. Fojut has contacted both the Coast Guard and Union Pacific and is currently waiting to meet with state representatives to discuss his idea.

At this point, he concedes, the project is “very wait and see…we don’t really know if we can do it.” But Fojut has certainly gotten a lot of discussion about how to handle this unique industrial landmark. “Even if it doesn’t happen,” he says, “the idea will hopefully spark a larger conversation about ‘what if?’” 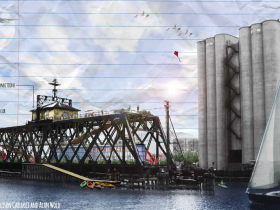 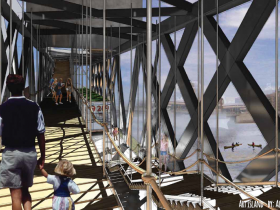