Homeless Tent City Is a Democracy

It’s actually several communities, and all are civil, orderly and well-run.

There are a lot of stories in Tent City, a homeless encampment that sprawls across five acres under the I-794 freeway west of 6th Street between West Clybourn and West St. Paul Avenues. More often than not, bad luck and bad decisions bring people here. A middle-aged lady lost her apartment because she took on too many boarders. Several middle-aged men traveled here for jobs that did not materialize. An older man with terminal cancer came to Wisconsin to go fishing and die. He and his girlfriend took a train from California and soon ran out of money when their plans to stay with family fell through. It takes just one mishap for veterans and people fresh out of jail who lack the resources or family that provide the rest of society with a safety net to end up homeless. 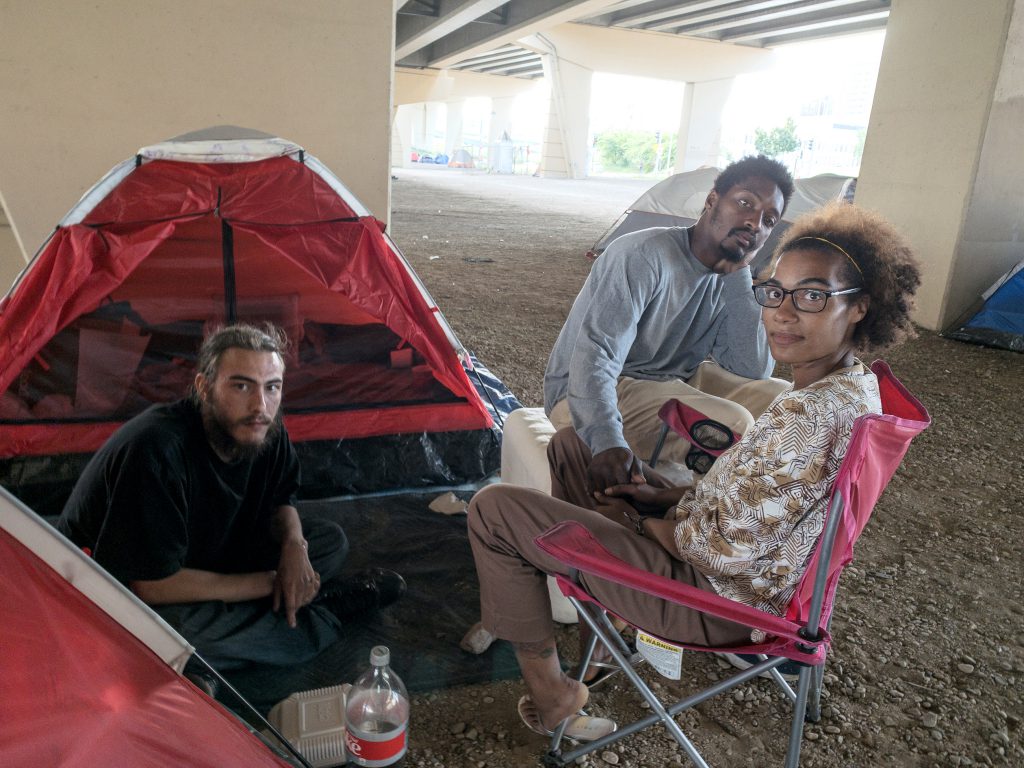 Many of the encampment’s dwellers have a plan to get back on their feet and some have the tools to do it such as cellphones, driver licenses, food stamps and healthcare. Some are on the list for Section 8 housing which provides federal assistance to millions of low income households for rent and utilities. Some of the denizens of Tent City have jobs, like a married woman who gets up at 6:30 a.m. to catch a bus to her job at Taco Bell in Oak Creek; a one-and-a-half hour trip each way.

Tent City is also centrally located to important services and amenities that serve the homeless. Showers and laundry services can be accessed a mile away at the Milwaukee Recuse Mission. Free wi-fi is available one block north at the Central Branch of the Milwaukee Public Library—an important resource for people who need to access online forms and information about subsidized housing, jobs and healthcare. Many homeless people from Tent City use the wi-fi across the street at the Intermodal Station.

The residents benefit from the kindness of strangers who drop off food and water and even occasionally bring grills and barbecue. Businesses in the neighborhood chip in. Most of the tents have been donated. There are cases of bottled water everywhere. No one seems to be hungry in Tent City thanks in large part to the work of StreetLife Communities and Street Angels, two local non-profits that help the homeless and a man everyone fondly calls Pastor Dave, described as “a good guy who really helps out.” 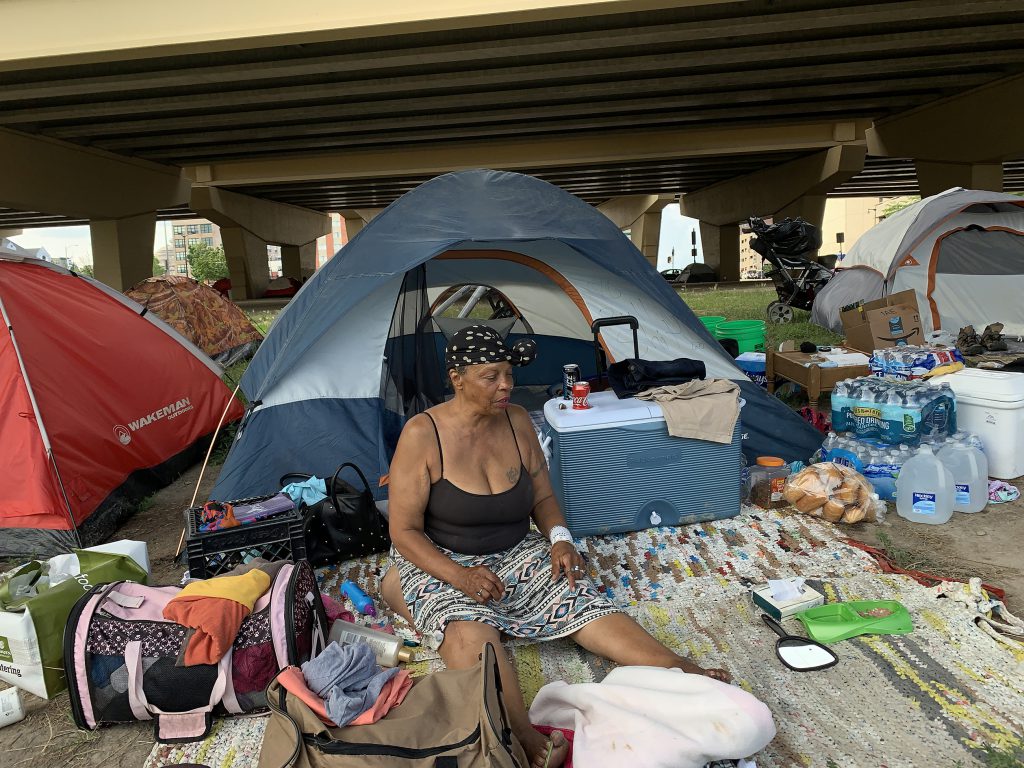 The expanse of the campsite gives the citizens of Tent City long views of people coming and going, which provides a modicum of security while the freeway overhead provides shelter from the hot sun and rain. The place is orderly and clean with an emphasis on good sanitation practices.

I say “citizens” because Tent City is a loose association of democratic neighborhoods; five clusters of tents spread out across the landscape like frontier towns. Each community has its own leaders, turf, rules and governing principles including a process to admit and expel members. They keep an eye on each other’s stuff and mete out a sort of informal justice that generally resolves most conflicts. When that fails, the police are called and “are nice” according to residents. Like more formalized communities, these create an orderly existence, mostly through self-policing, customs of civility, and camaraderie.

Each group thinks theirs is more exclusive than the others. The self-declared “quiet group” that occupies the south ridge overlooking the Menomonee River Valley points to the “tough guys” up the hill. 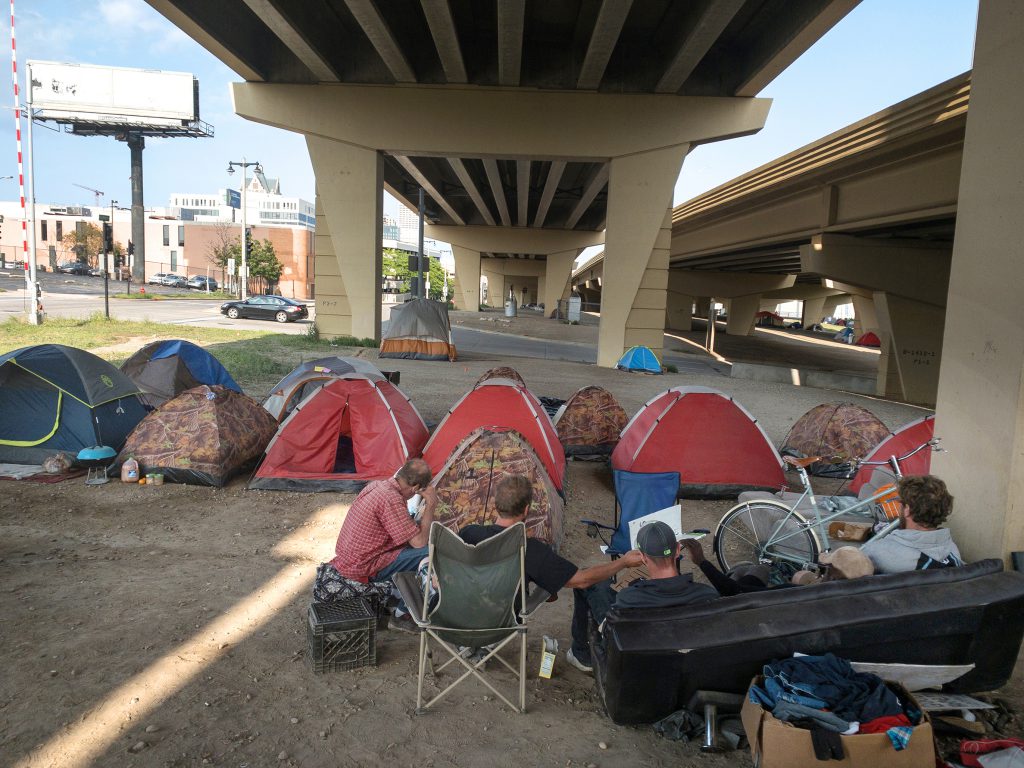 So I went up the hill and talked to the so-called “tough guys”. They offered me a chair, as one would do for a guest in your living room.  So I sat down and chatted with the group—all refugees from the Milwaukee Rescue Mission.

Why did they leave?

A chorus broke out. “Freedom!”

“If you don’t believe in God you are screwed, you are going to hell,” one guy said, and everyone nodded. “Catholics don’t get to go to heaven!” he added.

At the Rescue Mission, I’m told, attendance at religious services is mandatory as is wake-up and out of bed at 5:45 a.m. A 6:30 p.m. curfew made it impossible for one man to work overtime at the print shop where he is employed, leaving him with only two choices; forfeit the money that would eventually allow him to rent a place to live, or move out of the Rescue Mission.

Many described the humiliation of oppressive rules and favoritism. The residents of Tent City have made a choice—they prefer the freedom, autonomy and community of their “village” to their previous institutional setting. (When asked about this, the Rescue Mission’s president Patrick Vanderburgh said the wake-up time is actually 5:15 a.m. and confirmed the nighttime curfew and mandatory daily attendance at a religious service. As for the rules and philosophy of the mission he said many residents find it a “sweetly communal place,” but conceded “it’s not for everyone.”) 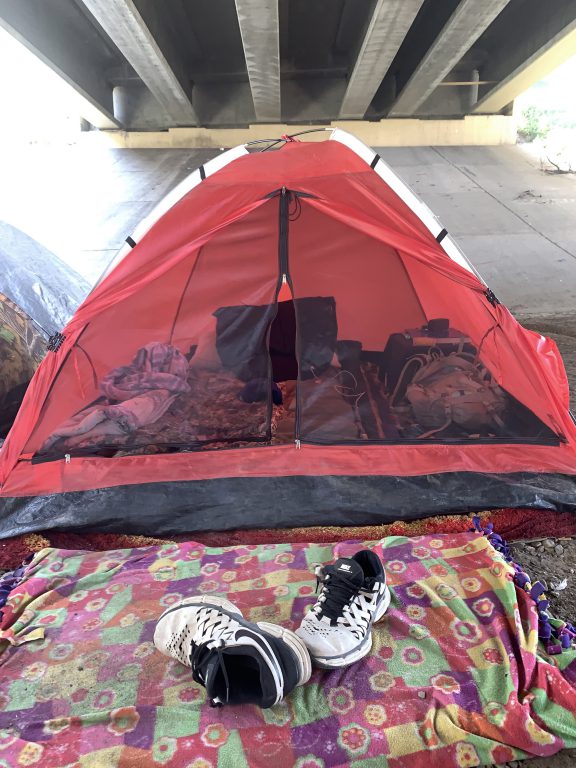 A few days after I went to Tent City I noticed a third row was filling up in the “tough guys” camp site. Tent City is growing.

And becoming a growing problem for the image of the city. Tent City makes homelessness visible in Milwaukee. A fact that has inspired the spontaneous generosity of a lot of businesses and individuals in Milwaukee and raised the ire some business leaders in town.

“No human being should have to live under these conditions, period,” Beth Weirick, CEO of Milwaukee Downtown Business District #21 told the Milwaukee Journal Sentinel. “For us to continue to allow people to live this way, I believe, is inhumane.” She described the place as “increasingly squalid, unsanitary and dangerous.”

That’s not what I encountered, which made me wonder about news accounts portraying the camp as being at a “crisis stage”. As I got up to leave, one of the men thanked me. “Of all the people who’ve come here—social workers and reporters—you’re the only person who sat in a chair,” he said. “Everyone else just squats, like our chairs are dirty.”

All photo by Tom Bamberger

4 thoughts on “In Public: Homeless Tent City Is a Democracy”