Scooters Are the Future

Which means automobiles in cities must learn to adjust.

“Every time I see an adult on a bicycle,” H.G. Wells wrote, “I no longer despair for the future of the human race.” 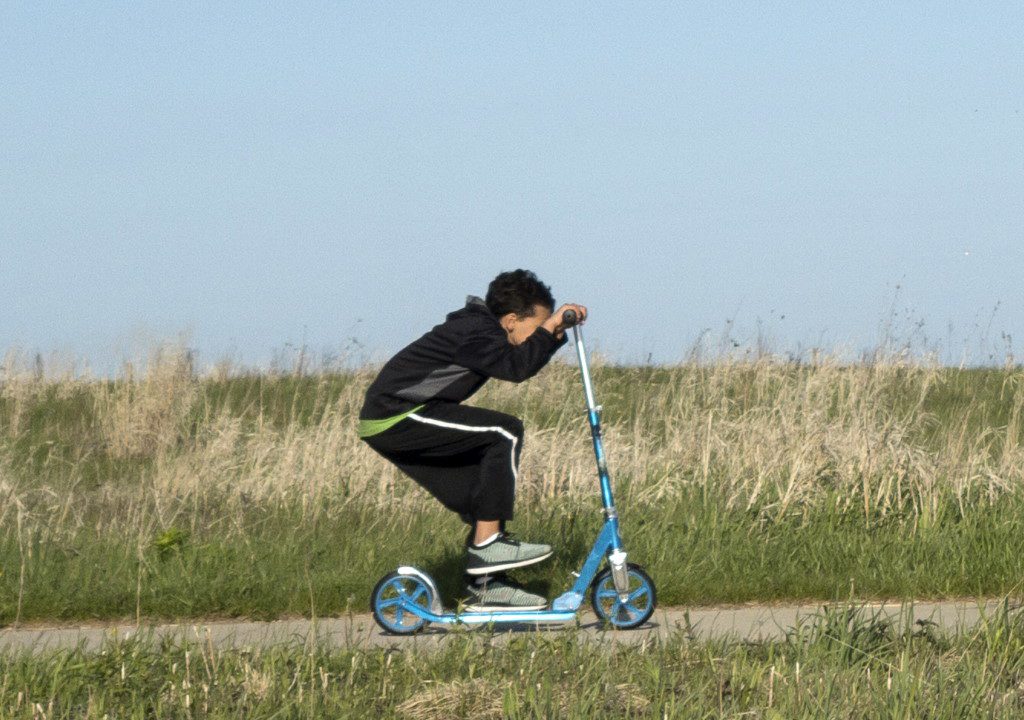 I was obeying all the laws of the road when a middle-aged guy in black SUV glared at me. I don’t read minds, but the SUV guy seemed to be saying “get off my road.”

The difference between an angry guy in a 5,000-pound vehicle and me on a 30-pound scooter was daunting. The SUV guy pulled up behind me at a stop sign. We both made left turns. After a block I went up on the sidewalk and parked in front of Hamburger Mary’s on the corner of 5th and National. The SUV guy slowed down, hung out his window, and screamed — “riding on the sidewalk is against the law!”

Indeed, a minute later a squad car rolled up. The SUV guy reported me to the police who happened to be just around the corner. The cops have better things to do, they explained, chasing down reckless drivers for example. We joked about it — why not arrest the guy in SUV? There oughta be a law against guys like that, period.

Even my Saturday coffee group of earnest east-side liberals see scooters as a great disturbance in the Force. Scooters are a nuisance, randomly strewn all over the place. They’re a danger to pedestrians and to their riders. 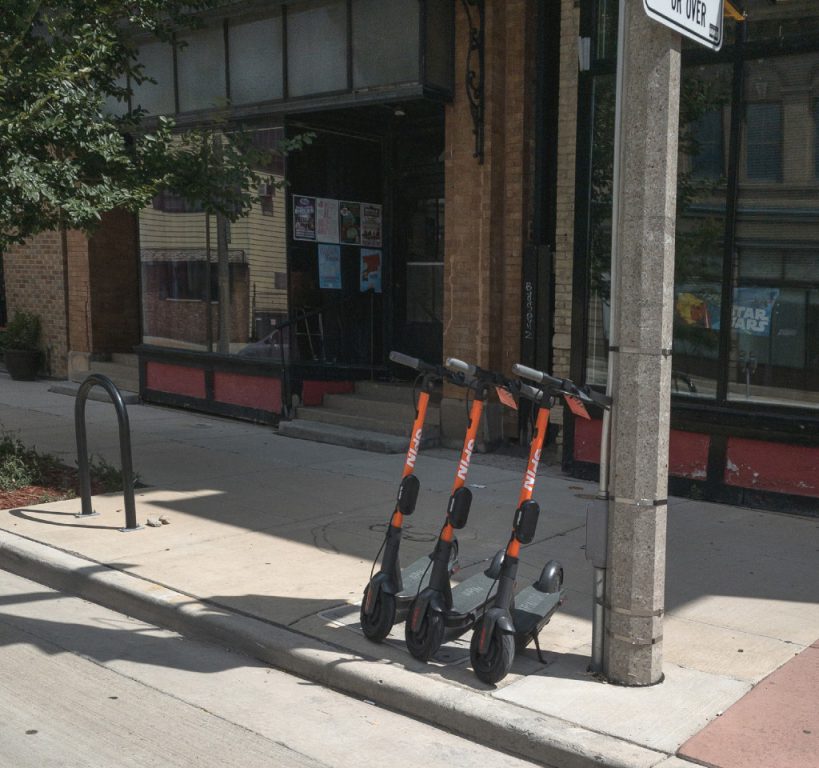 The same objections were made against bicycles at the end of the 19th century. A New York Times editorial ended with, “Soon they’ll want all of the Earth!” In the Colonist, a letter writer asked, “Is there a law to prevent cyclists from riding on the sidewalk, and, if they persist in doing so, is there a law to prevent one from upsetting them?”

On the other hand, a lot of people liked bikes. “The bicycle is indeed the great leveler,” reported The Century magazine in 1894. “It puts the poor man on a level with the rich, enabling him to ‘sing the song of the open road’ as freely as the millionaire.”  The United States Census noted at the time, “Few articles ever used by man have ever created so great a revolution in social conditions.”

Until the end of fall, scooters were everywhere in Milwaukee’s Third Ward. Anyone with a phone can just pick one up and leave it…wherever. All anyone has to do is scan the scooter with their phone and go — no parking, no maintenance, no insurance, no hassles. And scooters are fun. In the Third Ward, flocks of young people ride them just for the joy of it. 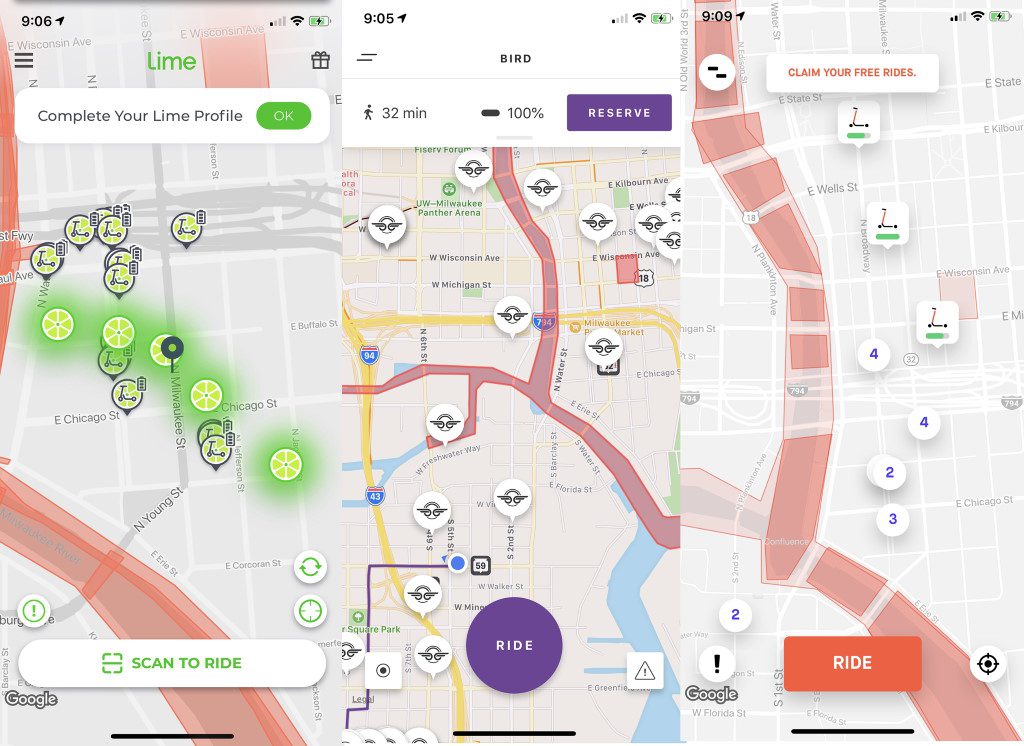 The guy in the black SUV has reason to be upset. Scooters are the beginning of the end of the supremacy of the American automobile — a 4,000-pound vehicle that can tow a boat at 80 mph, and that costs about $8,000 a year (not including parking).

This new form of transportation runs on billions of tiny chips in our phones, any one of which is millions of times more powerful than the computers that got us to the moon. More software-infused modes of transportation will follow and relieve us from bus schedules, car storage 22 hours per day, and will eventually eliminate driving or even owning a car.

Meanwhile, car owners are not giving up without a fight. They killed more than 6,000 pedestrians in 2018, a 41 percent increase since 2008. Adult bicyclist deaths have tripled since 1975. Over the last decade, cyclist fatalities increased as the number of bike commuters increased.

About 35,000 motorists are killed by other motorists each year. That includes 4,000 American children. Worrying about the dangers of scooters misses the point—automobiles are the largest cause of death of children and adolescents in the United States, not to mention the top producer of greenhouse gases, also not so good for our health. 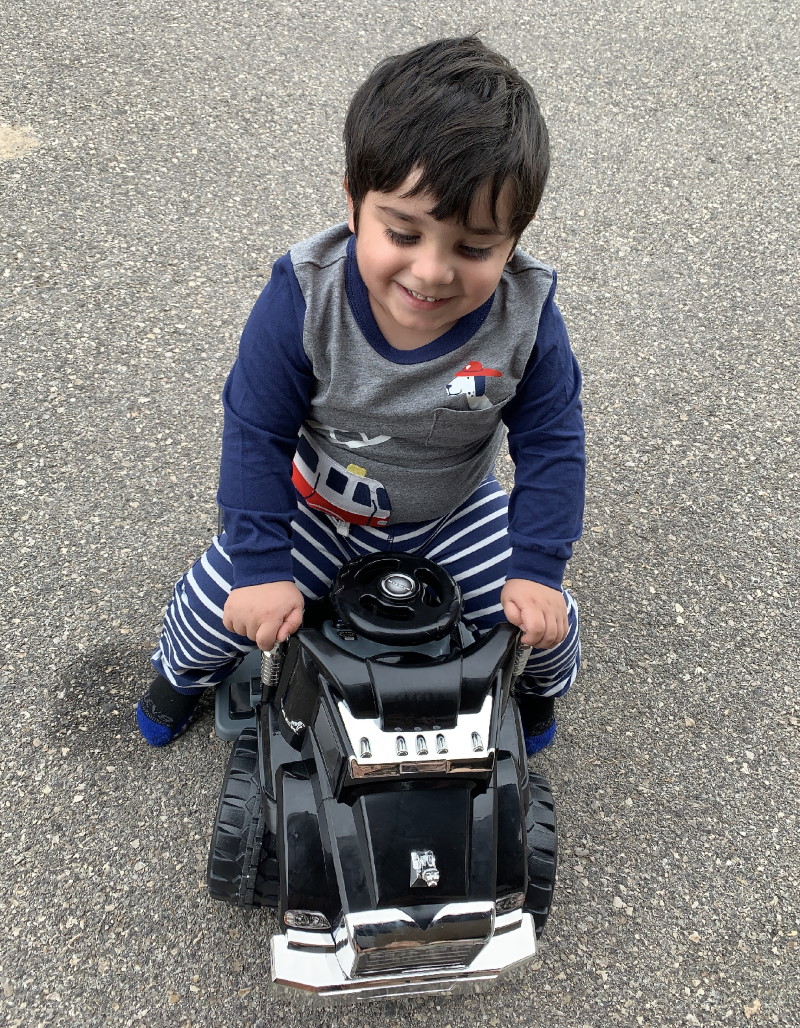 Milwaukee should embrace modal neutrality. Less cars means less death, period. Not to mention the 4.5 million people who are seriously injured by automobiles each year. It’s a wonder automobiles are not deemed a health hazard.

Scooters create more space and gobble up a lot less infrastructure in a congested city, especially when you include parking. Cars are the least efficient use of our roads. More than six scooters comfortably fit in the footprint of one SUV. A two-way bike path moves 7 times more people per hour and a sidewalk nine times more than roads made for private motor vehicles.  And what about the weight? A scooter uses a lot less energy because it’s less than 1 percent the weight of an average American car. 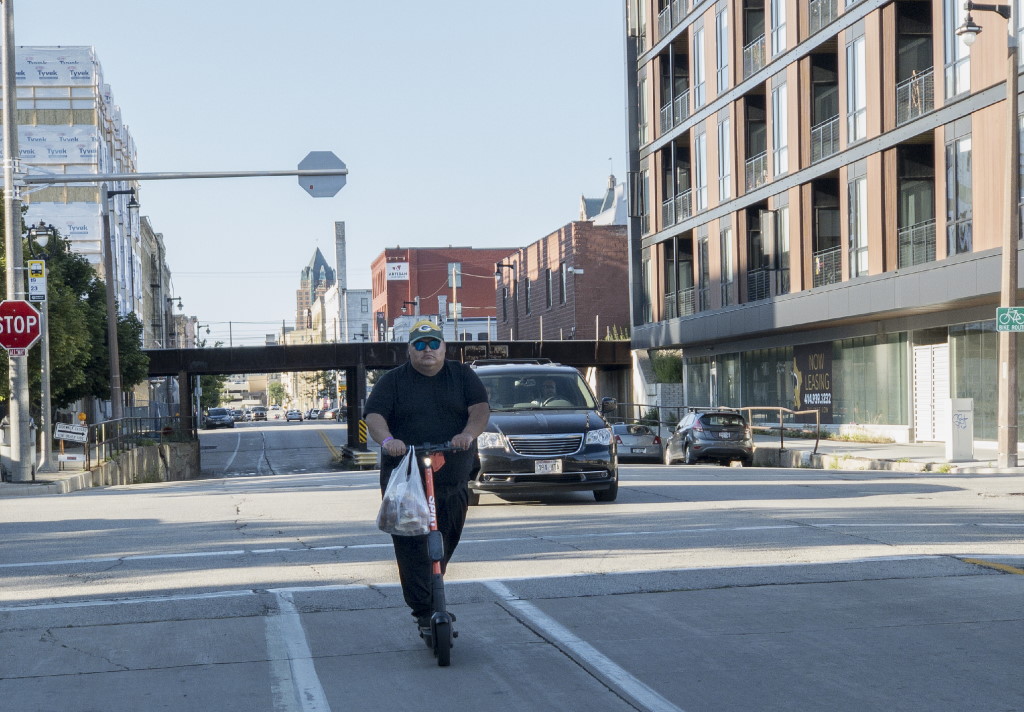 It’s a new age. In 2001, high-income young people drove nearly 70 percent more miles than their middle and low income peers. Today they drive less. People move to cities in part because they don’t want to spend an hour each day on a freeway to get to work and back.

Today, young people embrace computers the way they embraced cars in the 20th century. That includes walking to a coffee shop and working for a boss or client on the other side of the country; and Amazon delivering just about anything to your door.

Efficiency often makes a lot of sense, but convenience always wins in the end. Our grandparent’s 500-pound record collection and phonograph sounded a lot better than anything we hear from a seven-ounce iPhone. Scooters are the most convenient way to make short trips in Milwaukee. In cities, more than half of the trips are 3 miles or less.

I personally prefer a bike to a scooter but both are easy and convenient for the short trips I usually take in town.

If we want people to move to Milwaukee, then we should make getting around safer and easier for people who actually live in the city. We should start to think of city streets for people, bicycles, scooters, and cars. Not the other way around.

All Photos by Tom Bamberger.

3 thoughts on “In Public: Scooters Are the Future”