Murals have spread across town and are mostly predictable. But there is at least one exception.

Is there anything art can’t fix or make better in the world?

“In an ever polarized nation,” the Milwaukee Arts Board writes, “grants provide Milwaukee residents with more opportunities to come together through art and artists.”

I was on a panel with Arijit Sen, associate professor at UW-Milwaukee’s School of Architecture and Urban Planning, who described an art intervention to repair the spirit of Sherman Park after the riot in 2016. Students hung balloons in alleys. Seriously.

We are told that art can bring a cultural identity to underserved communities, activate distressed commercial areas and generate economic development. And in the vanguard of this movement are outdoor murals:

They have become the low-cost, accessible, and preeminent public art in Milwaukee, with some 75 of them to judge by this map. 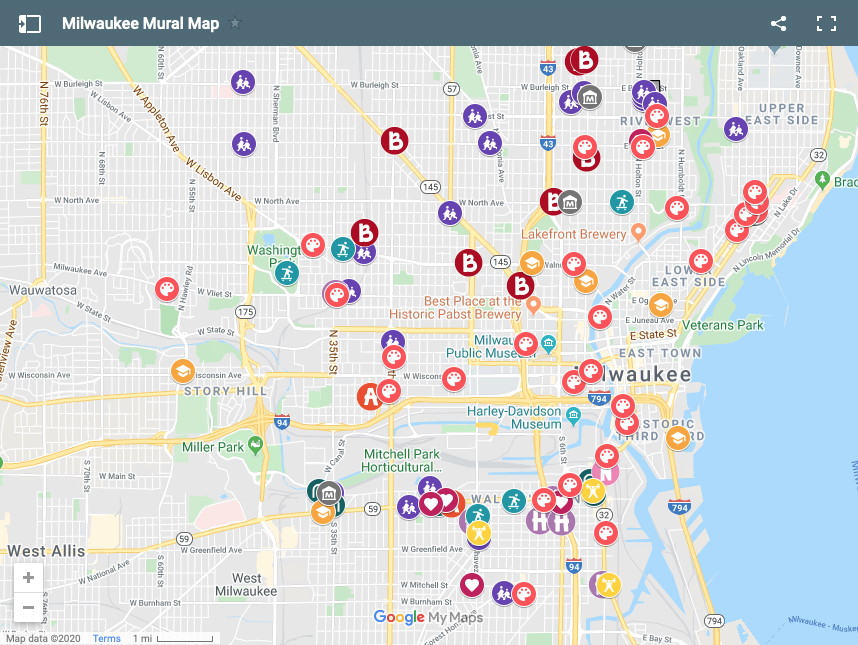 “Murals showcase what’s important to us: our history, dreams, heroes, and love for each other,” according to the Milwaukee Mural Map website.

Except too many murals look like the flat, obsessive, and cartoonish drawings you find on the back of a bored 6th grader’s notebooks. Juvenilia has become the definition of an urban mural in Milwaukee. 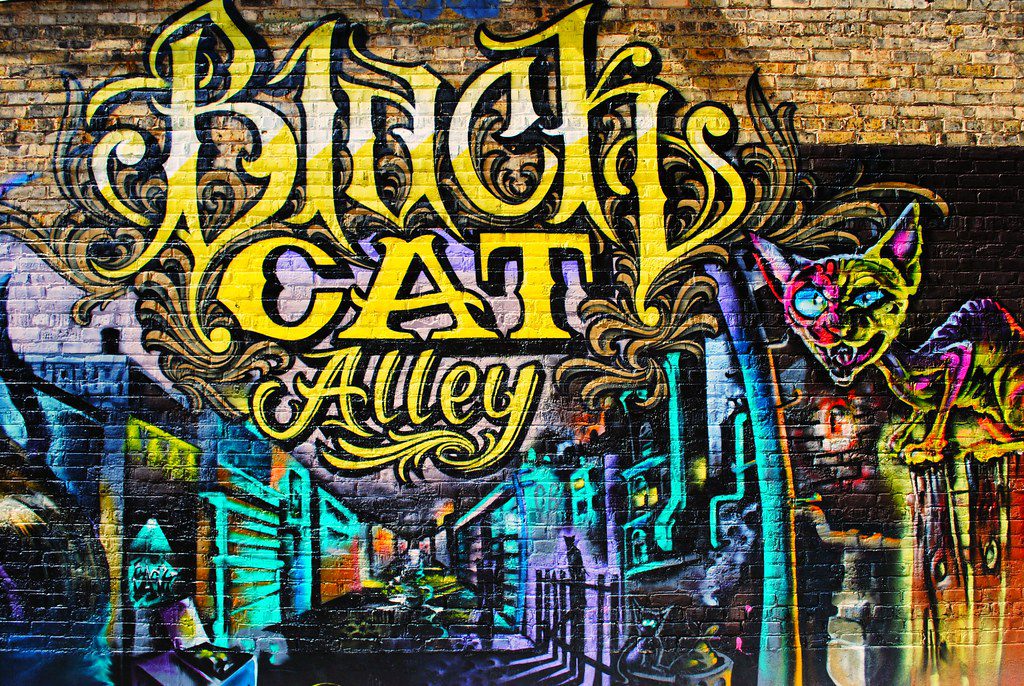 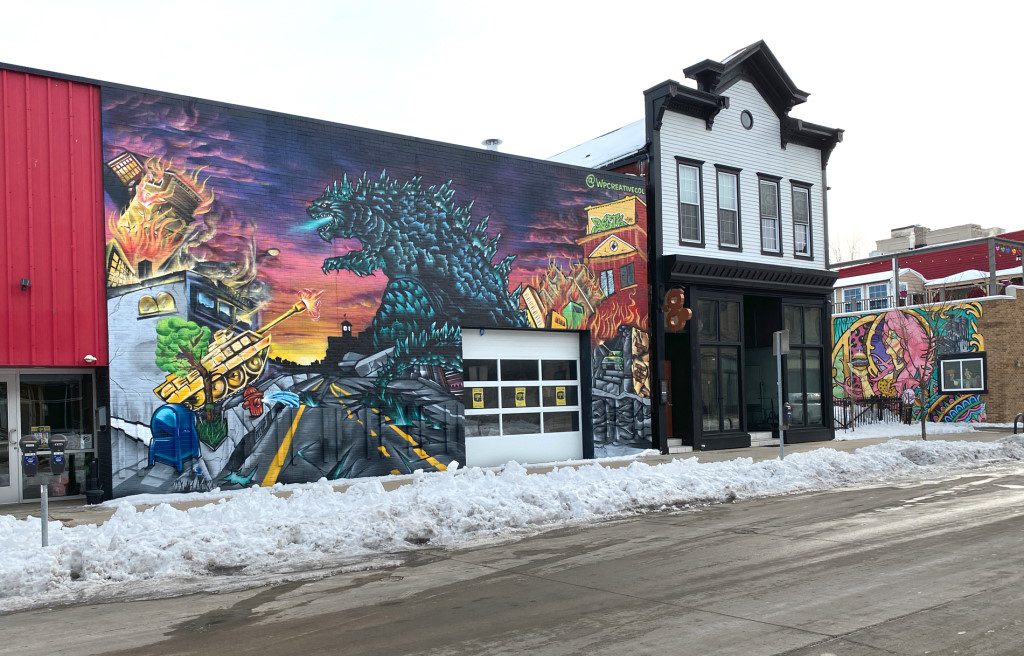 This wall was not empty. The mural literally erased a well proportioned straightforward building. Great art rewards repeated viewing while this overly busy cartoon wears you out and then is erased from your mind. Note the same sort of imagery continues just to the south on the north wall of Hamburger Mary’s.

This brewpub, by the way, closed shortly after the mural was painted just north of 5th and National. You might say it created the opposite of economic development. 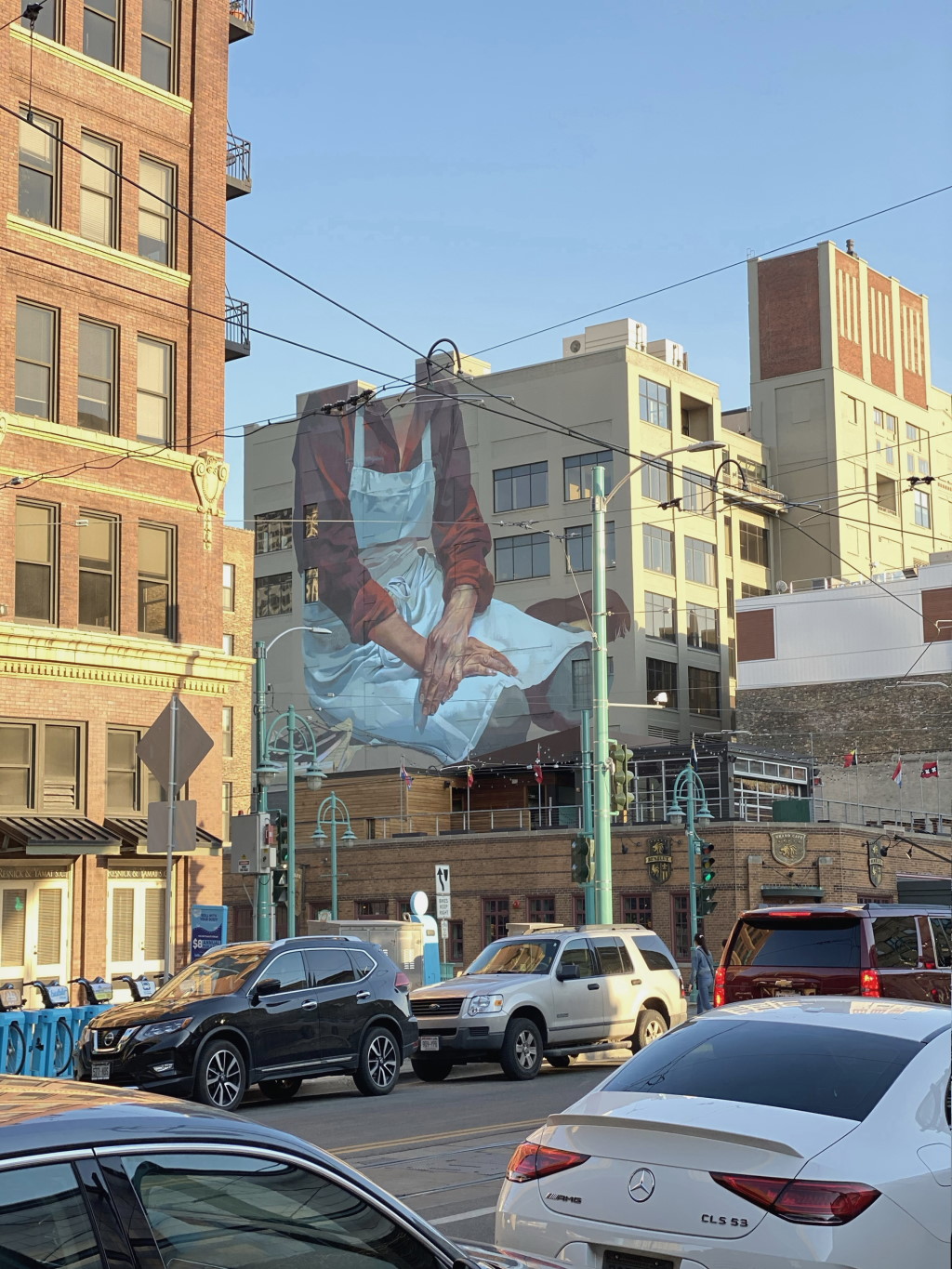 When was the last time you saw a mural with a sense of light, a diaphanous palette, and more than one dimension? An image that is not stuck to the wall and resonates at a distance?

I don’t really care about the story attached to this mural on the side of the Dye House at 320 E. Buffalo Street in the Third Ward, by Andreas von Chrzanowski (also know as Case Maclaim). The Dye House was once a place where women worked, hence the name Unsung Hero, a tribute to working class women. 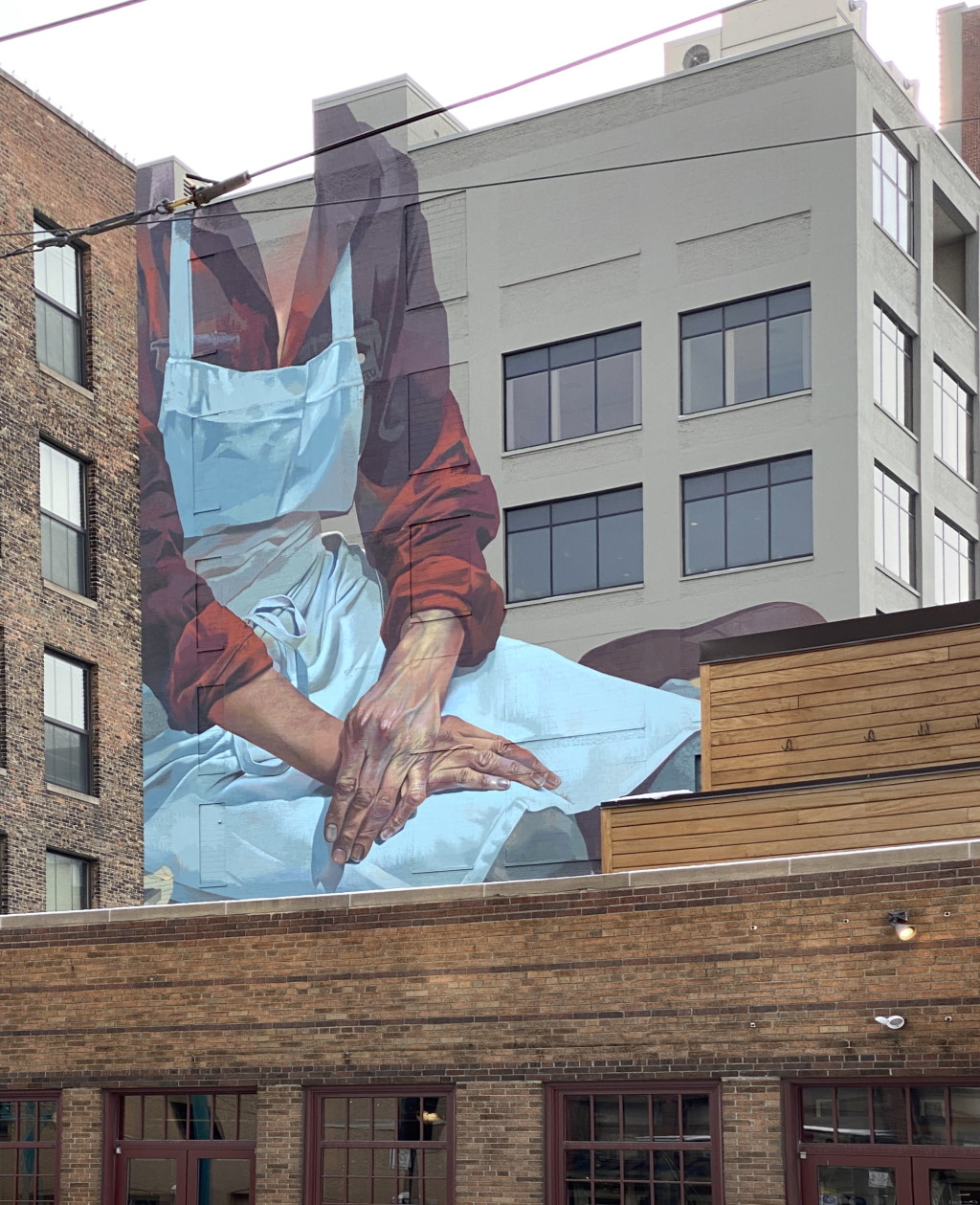 I like how this six-story figure messes with my brain. A monumental woman looks down from on high to the corner of Broadway and St Paul, the busiest intersection of the Third Ward. Yet our relationship to the image feels intimate, almost as though we are standing over her, casually chatting during break, rather than looking up. 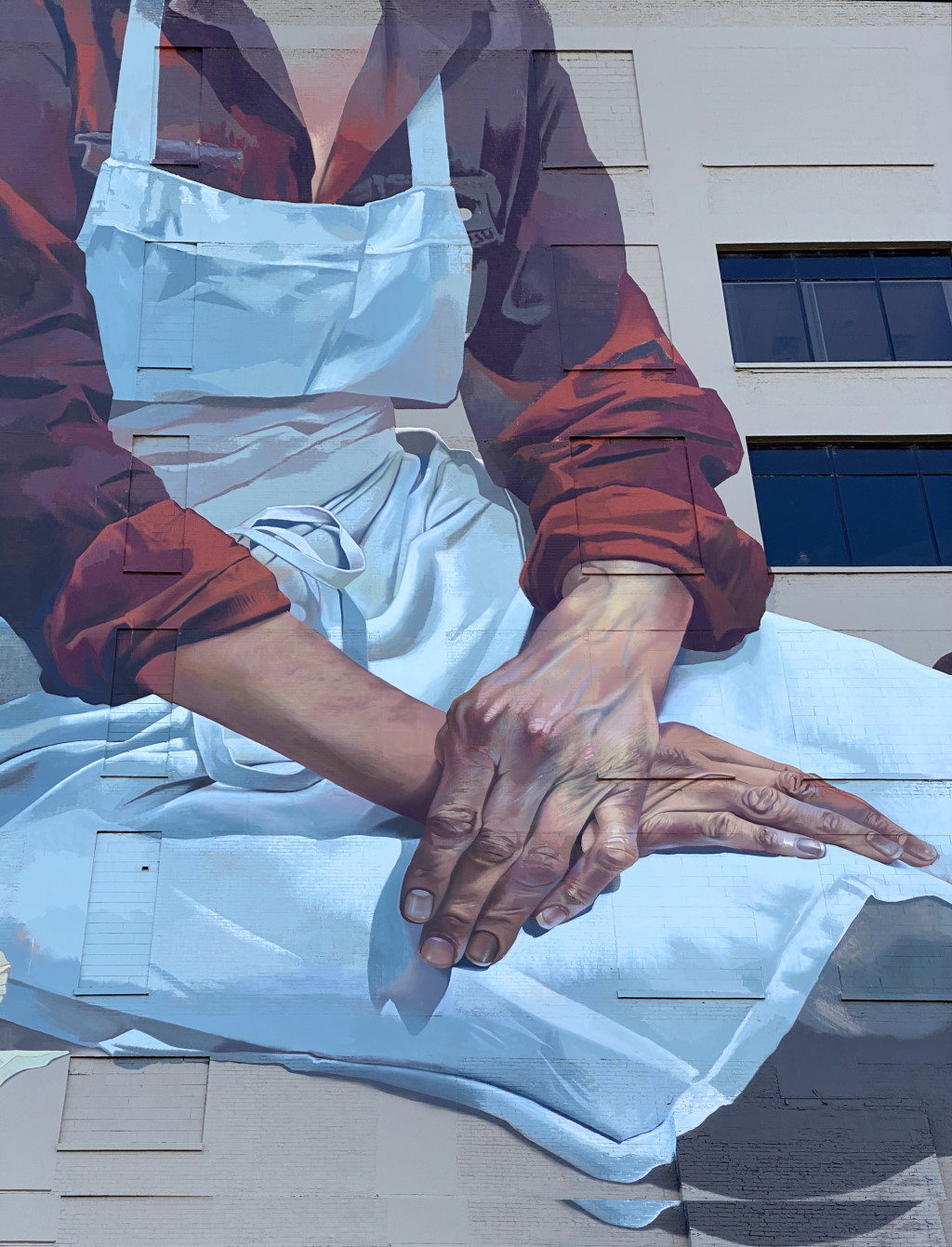 There was an internet controversy — many claiming a headless woman is misogynistic. I don’t believe any of these self-serving critics put their feet on the street and looked up. This woman is prodigious, rules her dominion with grace and strength.

Besides, why must art be weighed down by any particular meaning? A face would be too specific, even overbearing. Anonymity expands the narrative, leaves room to finish the thought, frees us to see art with our own eyes. 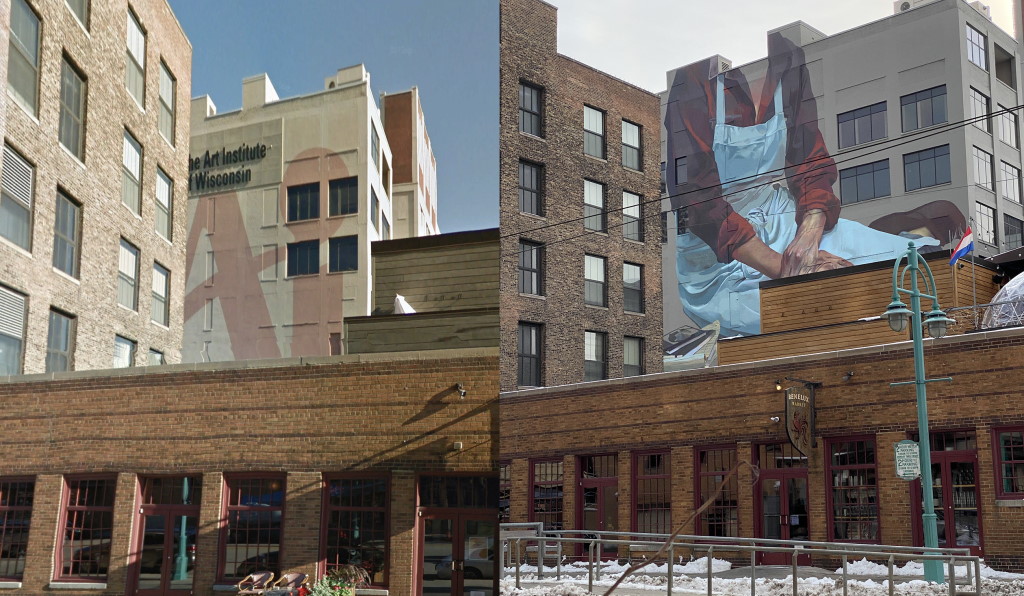 Unsung Hero give us pause. The texture of the fabric and flesh animates the space. The image leaps off the wall into our imagination.

Buildings frame the work from different points of view. Unsung Hero is poised and serene, unlike so many frenetic murals in Milwaukee. It gets along with its neighbors, inhabits our world. 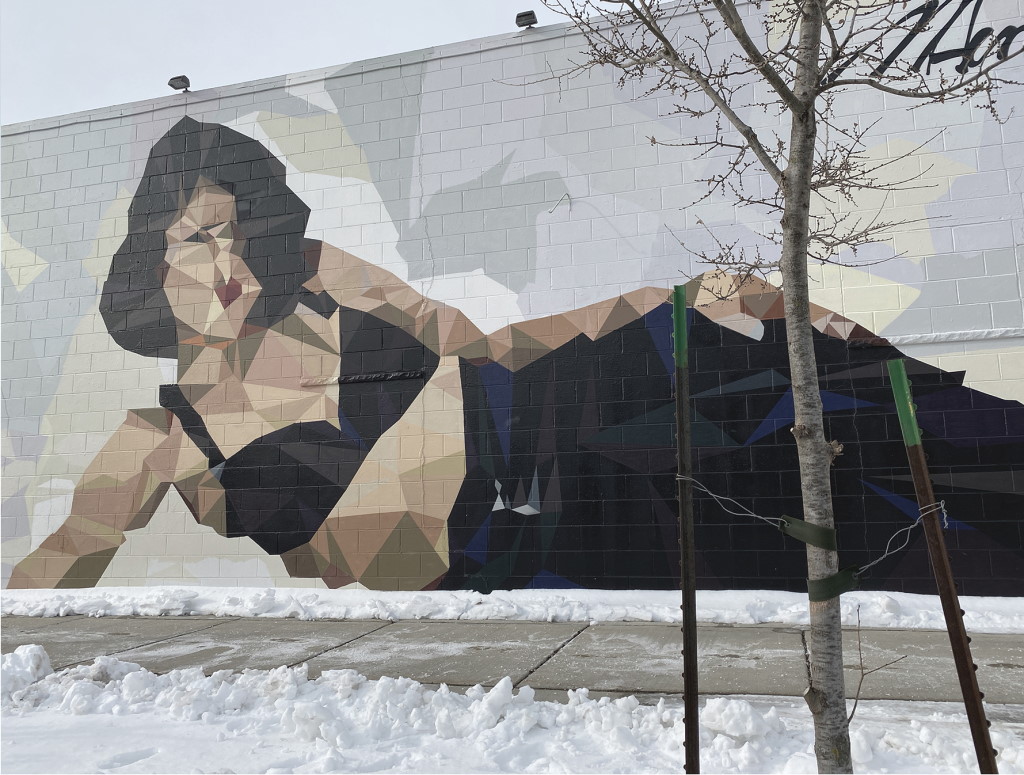 Meanwhile, I wonder why no one is outraged by this leering mural of a recumbent woman in her bra seductively posed on the long wall on 5th Street just north of National Avenue by our resident muralist, Mauricio Ramirez (who has done more than 20 murals in Milwaukee). Is there a cubist plugin in Photoshop? This slapdash image is embarrassing. 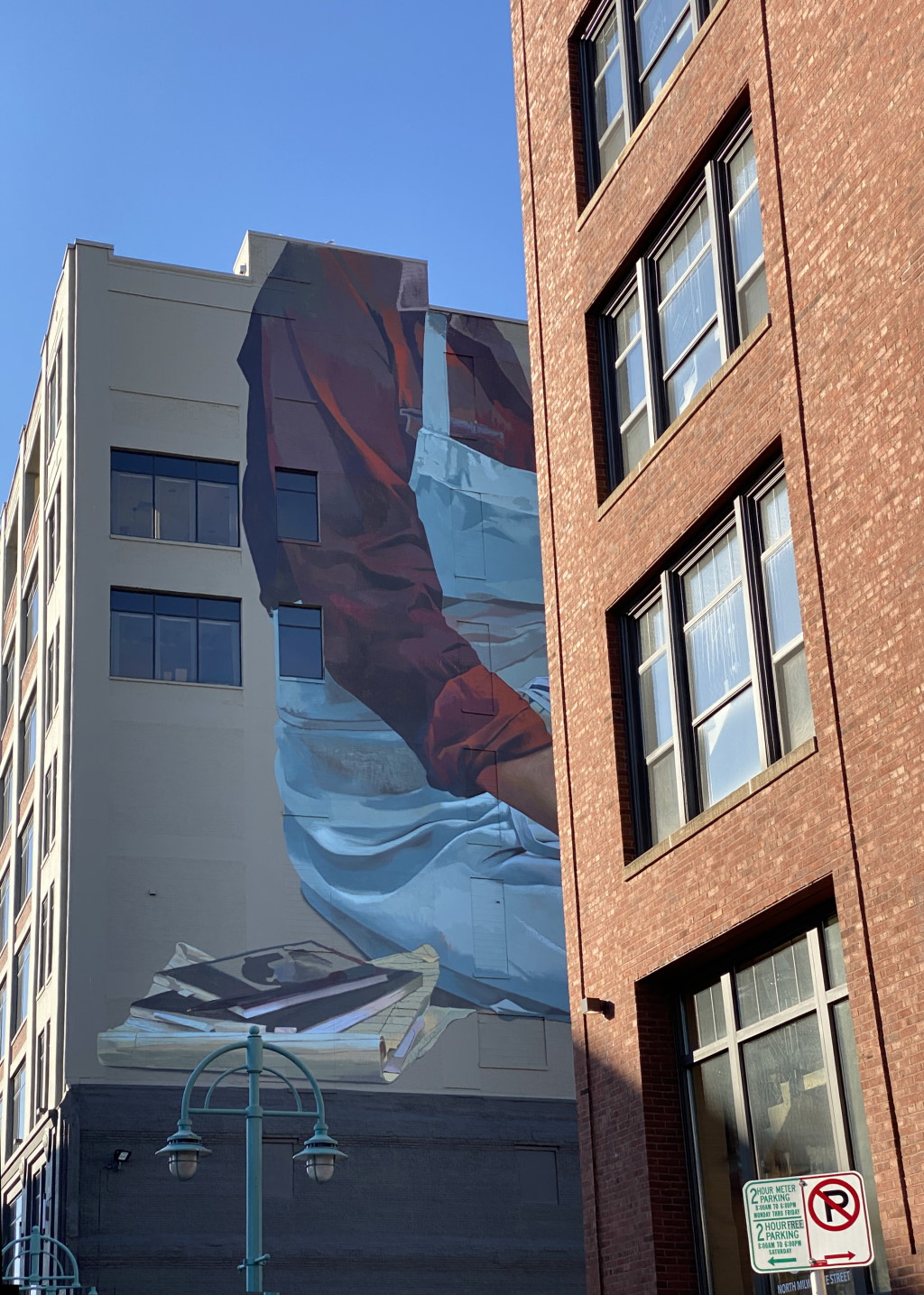 If we must paint over the walls of our city, let’s make murals worthy of our attention. Art is about looking. And this artist has given us something to see.

And for a contrasting view of the city’s murals, here is an Op Ed on the subject.