Murals Are a Community’s Voice

They have a raw power that doesn’t need the approval of art critics, curators or anyone else.

Street art is about community, and freedom of expression. It’s one of the brightest spots in the arts sector right now, bringing joy and valuable commissions to artists during this bleak pandemic which has crippled so many other corners of our economy and our nation.  Here in Milwaukee, mural artists like Fred Kaems, Mauricio Ramirez, Chacho Lopez, Dan Duffy and others have braved the cold springtime weather to bring us messages of joy and peace to help get us through these challenging times.

Three years ago, Milwaukee-based artist Tia Richardson (who was later awarded the coveted title “Milwaukee Artist of the Year” by the Milwaukee Arts Board) painted a stunning mural called “Sherman Park Rising” a year after unrest hit that neighborhood. This piece is now considered a major cultural landmark. Yesterday, that mural and others were shown considerable disrespect when they were assembled into a photo collage by local art critic Tom Bamberger, the lot of which were called (among other things) “flat” and “cartoonish.” This collage and other images were included in his article “The Good Mural,” published on April 19th by Urban Milwaukee. I’d like to offer a rebuttal to Mr Bamberger.

Murals are the raw voices that strive to represent the story of a particular place and time. They do not ask for the approval of art critics, or museum curators, or anyone else. And for most of us, we recognize this authenticity and we soak it right up. Speaking for myself, I’ll say that looking at street art on my travels is a great way to get an insight into what a particular community is all about. In Santiago, Chile, you’ll find vibrant and effusive political protests, writ large across downtown buildings, and then left there—raw and angry—for everyone to read. In northern Wisconsin, you’ll find gentle little public artworks celebrating the fishing community. In Milwaukee’s Bronzeville neighborhood, you’ll find colorful wall pieces celebrating Milwaukee’s proud African-American heritage.

In Bamberger’s Urban Milwaukee article, the focus is to praise Case Maclaim’s  astonishing, six-story mural in Milwaukee’s Historic Third Ward, titled “The Unsung Hero.” The critic admires the brushwork and composition by this legendary artist, but in doing  so he utterly misses the point. (Full disclosure: my agency, Wallpapered City, was responsible for helping this building owner commission Case Maclaim for this wall, and I was the one who presented the concept—among many others—to the Architectural Review Board for approval.) This public artwork is a reflection of the Historic Third Ward, and the building it is painted on, in every way. And yes, it has received both positive and negative  responses, as Bamberger reports in his review. But it was not put there for us to admire its “diaphanous palette” (eye roll). Yes, Case Maclaim is a hell of a technical painter. But he’s also a legendary street artist, and made that piece as an homage to women’s work in Milwaukee’s factories, and specifically to Karen Bell, the great chef of Milwaukee’s Historic Third Ward and leader of Bavette la Boucherie. In other Case Maclaim murals around the world, he makes murals not to excite art critics, but to celebrate and challenge the history of the city or neighborhood in which it’s been painted. 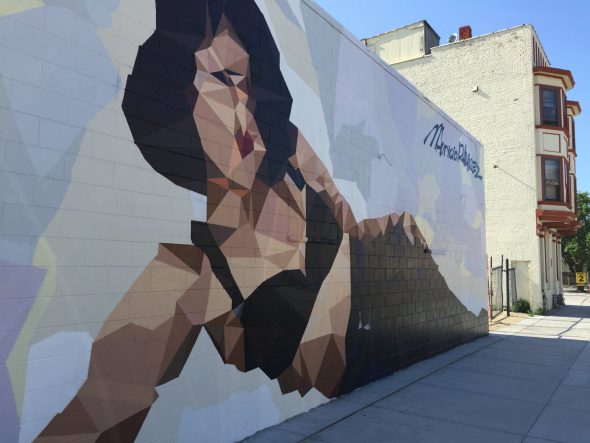 Tom Bamberger should not have to insult the work of other artists to forward his own personal favorite. To call the work of Mauricio Ramirez “embarrassing” is unforgivable, especially given how  well-loved this artist’s work is in our city. His popularity is his relevance. Ramirez is also a master of color, by the way, and is a treasured cultural icon in our region. The good news is, we don’t have to care one bit about what this reviewer, or any other reviewer, thinks. Don’t even take my word for it. Street art is powerful precisely because it’s authentic, public, un-curated, and un-filtered.

And we need more of it, and we need an even wider array of voices represented in our murals. We need the voices of people from all the groups who represent the rich diversity of our city. This plurality is exactly what makes a mural scene worth experiencing. As stated in a recent paper by Americans for the Arts, “Places with strong public art expressions break the trend of blandness and sameness, and give communities a stronger sense of place and identity.”

Let’s ignore what the critics think, and keep making murals. Let’s make them in every style and every color imaginable, and let’s fiercely protect the voices of our artists from being extinguished by elites who find our work uncomfortable.

Stacey Williams-Ng is a co-founder of Black Cat Alley, and the leader of Wallpapered City LLC, the outfit responsible for bringing over 40 murals to Milwaukee since 2015. Stacey is a board member of Imagine MKE, a former contributor to “Art City” by Mary-Louise Schumacher, and a former MIAD instructor. Her own murals appear throughout Milwaukee, and in cities as far away as Memphis, Tennessee; Hobart, Tasmania and Buenos Aires, Argentina.

One thought on “Op Ed: Murals Are a Community’s Voice”