City Creating Green Project Under I-794

MMSD-funded infrastructure on state land to capture 150,000 gallons of stormwater in a heavy rain.

The City of Milwaukee’s Department of Public Works is working on a green infrastructure project underneath Interstate 794 to capture stormwater runoff from the freeway overpass.

The project will collect runoff from more than six acres of freeway overpass on a site below the freeway that is approximately 16 acres west of 6th Street between West Clybourn and West St. Paul avenues. Right now, there is approximately $1 million in funding for the construction of the infrastructure. 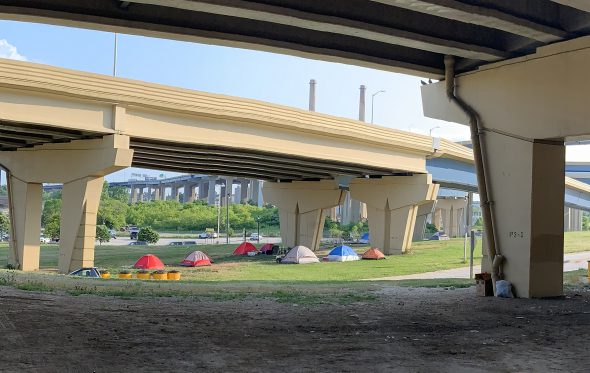 Public Works is collaborating with the Milwaukee Metropolitan Sewerage District and the Wisconsin Department of Transportation on the project. The land is owned by WisDOT and the project funding comes from MMSD’s Green Solutions Program. WisDOT and Milwaukee County have been working to relocate a number of individuals currently living on the property in what is colloquially called “Tent City”.

“This green infrastructure project is an exciting collaboration with the county and state as we examine potential land use and possibilities for this area in creating effective, sustainable solutions to storm water management,” said Commissioner of Public Works Jeff Polenske, in a statement.

The partners held a very well attended public meeting Tuesday at the Public Market to show the early concepts for the green infrastructure.

This project aligns with the city and Mayor Tom Barrett’s Green Infrastructure Plan, which aims to add approximately 36 million gallons of stormwater storage through green infrastructure by 2030. This infrastructure is largely aimed at helping Milwaukee adapt to climate change.

When the storm sewer is overwhelmed and a overflows, that runoff ends up in local rivers and Lake Michigan.

The project aims to keep that storm water out of the storm sewer in the first place, adding cushion to the system during heavy rain events. Plans are not yet concrete, but it will likely use some combination of bio swales and bio retention areas that collect and store stormwater during a rain event. Kurt Sprangers, DPW stormwater manager, said the plan will likely include some on-site treatment of the water.

Whatever the details of the final plan are, its goal is to “capture as much water as we can reasonably treat so we want to maximize that ratio of quantity to quality,” Sprangers said.

Right now there is only funding for construction of the green infrastructure. But the partners hope to activate the space for community use in the future. Activation could include walking trails, playgrounds or even mountain bike paths.