Is There A Plan To Prevent New Tent City?

City officials worry. If no plan, should state build a campground under highway?

While a plan for the construction of a green infrastructure project under Interstate 794 continues to advance, Common Council members are still concerned a homeless encampment known as “Tent City” could re-emerge this summer.

“My suspicion is they will absolutely be back and be back with a vengeance given the attention the political convention will focus on Milwaukee,” said area Alderman Robert Bauman, referring to the Democratic National Convention coming this July. “What steps are being taken to prevent a reoccurrence of this camp as soon as the weather turns warmer?,” he asked at Wednesday’s Public Works Committee meeting.

“It is a complex issue. We are not waiting for spring time,” said Wisconsin Department of Transportation (WisDOT) southeast region director Dewayne Johnson. Fencing has been installed on the WisDOT-owned site where Tent City arose.

“I think it’s really going to take persistence on all of our parts to continue to work on this,” said Johnson. “There are real homelessness issues out in our community that everyone is grappling with. Irregardless (sic) of the events coming up, this is a real issue we need to deal with.”

“We have worked to activate the space, we will continue to do that, but that by itself does not solve it,” said Johnson. He said the last cleanup found an item dramatizing potential health concerns at the site – a five-gallon bucket filled with used needles.

Bauman asked what happens if people end up on the site on April 15th and refuse to move. “We’re trying to move them. That’s where the police department fits in,” said Johnson. The WisDOT manager said “five or six” people were relocated to housing just before Christmas. Since Tent City was emptied in October, officials have said all residents that wanted housing have been provided shelter.

Deputy city attorney Adam Stephens said the county’s implementation of the Housing First model, where chronically homeless individuals are provided shelter before officials try to match the proper wrap-around services, has been “overwhelmingly successful.” He said the partners are in agreement that Housing First is the right model.

Calling Tent City “unsanitary, unsafe and unsustainable,” Stephens told the committee that homeless encampments have long existed across the city. “They have never been as visible and as large,” said the attorney. The 2015 documentary 30 Seconds Away shows two such sites that are now gone: the former Solvay Coke site that is being redeveloped for Komatsu and a Menomonee Valley warehouse adjacent to what is now Third Space Brewing.

“There are two ways we can respond to this, one is law enforcement, which I think would be the worst way, the other is the humane way,” said Ald. Michael Murphy. “We have to find a better solution other than putting people in jail.”

Milwaukee County Housing Division housing administrator James Mathy said a new challenge is emerging – the length people have been homeless. Mathy said when the county started implementing a Housing First model many of the homeless individuals had been on the street for years, qualifying them as “chronically homeless” and eligible for more resources. Individuals at Tent City and other homeless encampments don’t meet that qualification, having been homeless less than a year.

“It does make things a lot more complicated. We didn’t see that a few years ago. From a policy perspective that’s important to recognize,” said Mathy.

Murphy noted another problem: “You have a migration of people coming here that exasperates the situation.” Bauman said he was informed Tent City had been drawing residents from across the state. An October media account backs up that claim, identifying one resident that came to the encampment from Rice Lake.

Ald. Mark Borkowski said he was concerned with the lack of a public plan to prevent Tent City from reappearing. “I hope to heck we have outstanding success. Me personally, I’m not that confident,” said the southwest side alderman.

Bauman suggested that if the state wasn’t going to request the police remove individuals, it should invest in sanitary amenities. “The state has no problem on spending billions of dollars laying concrete, Lay in some restrooms,” said Bauman of WisDOT’s large budget. “The fact that this is [WisDOT] property may be a blessing in disguise, it’s the one department that gets unlimited spending.”

“From the perspective of Milwaukee County that’s not something we should do. We know what the solution to homelessness is,” said Mathy. “Again, this is a very complex issue. Many of the people at the encampment refused shelter.” He praised the broad partnership as a rare effort to address homelessness.

“There is a temptation here to oversimplify this. I appreciate Alderman Borkowski’s comments about it feeling uncomfortable, it is deeply uncomfortable,” said Stephens. “There are resources out there. Are there enough? No. That should make you uncomfortable. It makes me uncomfortable.” Stephens said the City Attorney’s office has been tracking the number of incidents of felony battery, stabbings and other crimes at the location.

“You’ve been on this as best as can be expected,” said Bauman to the local partners, specifically excluding the state. Bauman pushed for state intervention, while Murphy suggested a federal response was needed.

“This is a high profile symptom of a much deeper problem,” said Ald. Nik Kovac. The alderman, in a reference to the current Presidential administration, said he didn’t expect a solution to emerge in the next year, but maybe one could come in 2021.

“Regardless of the issue, we’re all committed to deal with the issue of homelessness,” said Johnson.

For more on the green infrastructure plans, see our coverage from December. 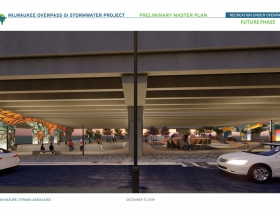 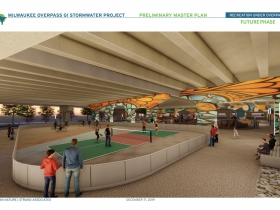 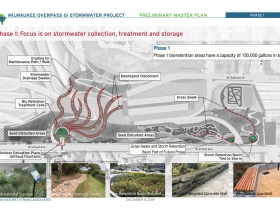 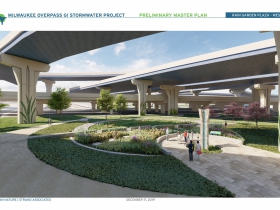 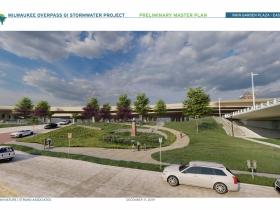 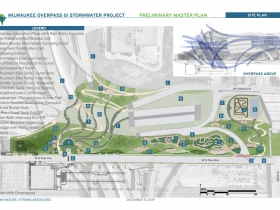