Why Did Democrats Choose Milwaukee?

Choosing this city for 2020 convention is about winning and signaling Democratic values. 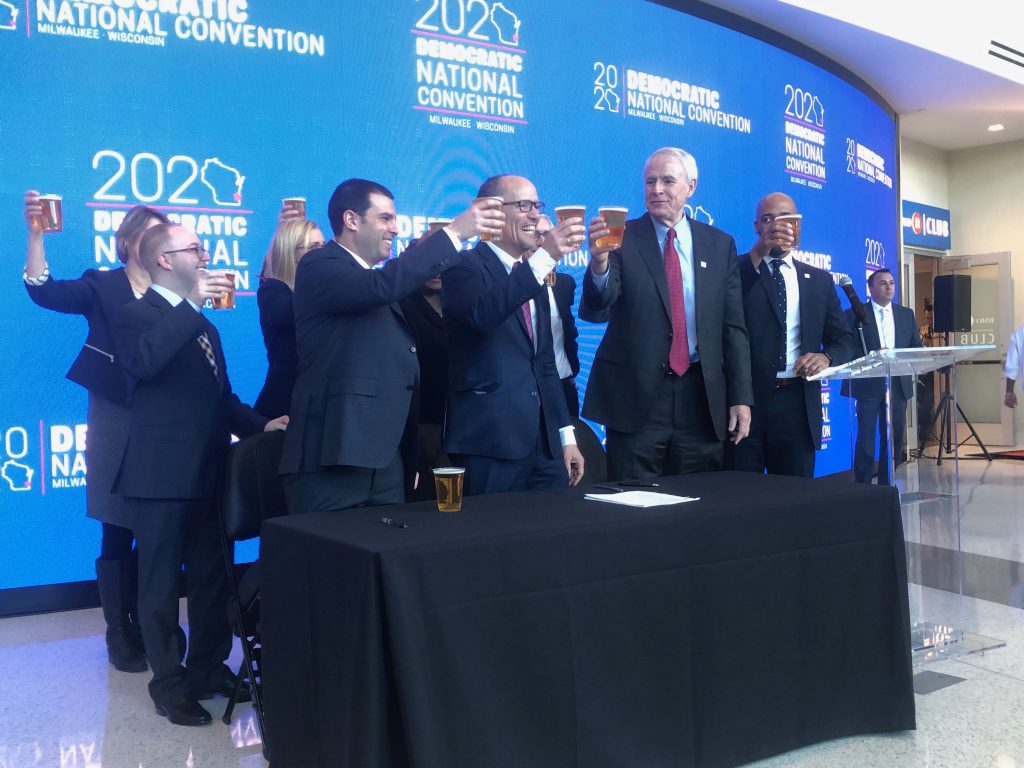 Speaking at a press conference in the Fiserv Forum lobby, Perez laid out a vision for what he calls the most significant election of his lifetime.

“Where you hold a convention is a very strong statement of your values,” said Perez. He touted Milwaukee as a diverse, inclusive and strong union city. Perez also noted the state’s history of being a leader in investing in education and singled out the “dynamic duo” of Governor Tony Evers and Lieutenant Governor Mandela Barnes as the people who would bring it back.

“What I’m most proud of is the Democratic Party has again become an every zip code party,” said Perez in a well-honed stump speech trumpeting Democratic Party principles. “If you sell peanuts you shouldn’t get paid peanuts,” added Perez in his praise of the Milwaukee Bucks labor agreement that will raise the minimum wage at the arena to $15 an hour by 2023.

The actual convention is still more than a year away, but Perez has already begun counting down the days: “490 days and we will have a discussion about how to retake our democracy,” said the former U.S. Secretary of Labor.

Perez thanked Mayor Tom Barrett and Bucks vice president Alex Lasry for working to resolve any lingering concerns with Milwaukee’s bid. “I know his number by heart, and he knows mine,” said Perez of Barrett.

The mayor, giving his second speech of the day at the arena, thanked Perez for choosing Milwaukee.

“It’s important that it’s held here because Milwaukee and Wisconsin are a microcosm of the country,” said Barrett. “The convention is about working people, the elderly, farmers, and they’re all right here in Wisconsin.”

Lasry, who has only lived in Milwaukee since 2013, said: “this is our chance to reintroduce the city on the international stage. Milwaukee has been called the Midwest’s best kept secret and today the secret is out.”

Congresswoman Gwen Moore, who Perez described as a powerhouse in Washington DC, promised “the Democratic convention of all conventions.” She promised the estimated 50,000 attendees would enjoy lots of beer, brats and cheese.

But she also said the convention would be a chance for Milwaukee to shrug off its stereotypes. “This is an opportunity to display our diversity,” said Moore. She promised to be the leader on making sure the estimated $200 million economic was shared by businesses large and small and residents of all colors and creeds. “Trust me, that will be my role in the convention,” said Moore.

Perez, who said the convention isn’t a guarantee of electoral success in Wisconsin in 2020, praised the strides Democrats have made in the state. He made a last minute visit to the state on the day before November’s election, and recounted the optimism and teamwork he saw. Alternating between English and Spanish, Perez praised everyone from Evers and Barnes at the top of the ticket to immigrant rights organization Voces de la Frontera.

The results of the 2018 election certainly worked in Milwaukee’s favor, as Perez repeatedly remarked on the optimism and opportunity for growth he saw in the state. On a national level, the party will need Wisconsin and other upper Midwest states to vote blue if it hopes to succeed in 2020 following a disastrous 2016 showing.

Perez also downplayed concerns that Milwaukee wasn’t big or fancy enough to hold the convention. “We believe that every city had the resources to pull this off,” said Perez.

Barnes made fun of the narrative that the city wasn’t elite enough to hold the event.”It is fancy to see you all here today,” said the lieutenant governor. “We have a Bronze Fonz and as they say the Cream City always rises to the top.”

Behind the scenes, the DNC clearly had concerns about the logistics of who will stay where. Multiple sources said discussions centered around making sure delegations ended up close to or in the city. Barrett joked in a press scrum that his chief of staff Paul Vornholt said he worked for Hotels.com after fielding so many logistical questions.

Outside of Chicago, the DNC has not held a convention in the Midwest since 1916 in St. Louis.

Hard Work Ahead, Including Lots of Fundraising

The convention isn’t a matter of waiting 490 days, opening the arena doors and hoping everyone shows up.

Barrett said the host committee still needs to raise an additional $50 million in private funds to support the effort. That’s in addition to the $50 million that is estimated to come from the federal government to pay for security.

Perez said one thing in Milwaukee’s favor is it already has the greatest amount committed. Barrett said of the approximately $11 million in hand, the funds came evenly from individuals and businesses. Northwestern Mutual CEO John Schlifske was singled out during the mayor’s speech for being the first business leader to back the effort.

The host committee, chaired by Lasry, is expected to announce a finance director in the coming days.

Cash isn’t the only thing needed to make the convention run. “We are looking for 12,000 of our closest friends to volunteer,” said Barrett.

Outside of fundraising and organizing, one Milwaukeean needs to start warming up his vocal cords. Jason Rae, who serves as the secretary of the national party, will lead the roll call when the 7,000 delegates pledge their votes.

And despite being only 32 years old, Rae has seen the job done at four conventions already. The 2020 convention will be his fifth and first as secretary.

For more on the convention, see our earlier coverage, including “12 Rules For City in DNC Convention Contract.”

The convention runs from July 13th through July 16th.

One thought on “Why Did Democrats Choose Milwaukee?”