Plus: New Good City Brewing opens and downtown bar This Is It! expands. 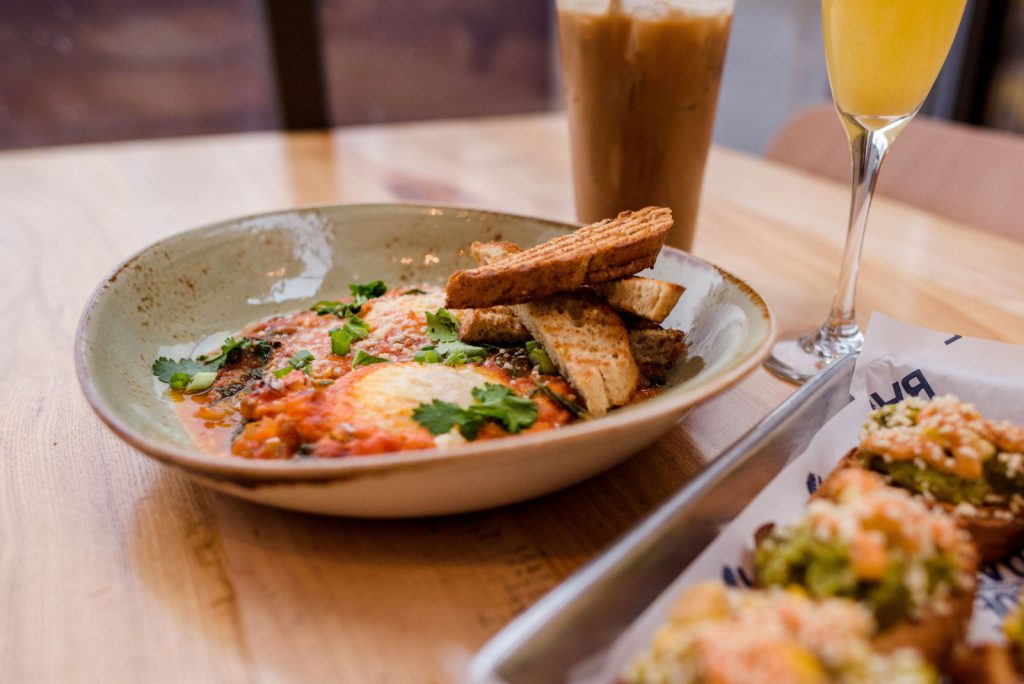 Saz’s State House (5539 W. State St.) has done away with its brunch buffet in favor of a full brunch service. Chef Lindsay Discher and General Manager Jason Cornelius are planning a variety of new dishes in order to “make the shift to a nicer menu with an emphasis on comfort food.”

OnMilwaukee’s Lori Fredrich writes about some of the food and drink options:

Settle in with a housemade Bloody Mary (there are four options including basic, BBQ, spicy Hellfire and the Cajun, pictured above, which is garnished with grilled andouille and shrimp ($7.25-$12). Try a classic mimosa, or venture out to enjoy a Mango’sa made with orange juice and mango puree; or a summery take like the watermelon cooler featuring cucumber vodka, watermelon puree and cava ($5-$8)…

As for entrees, there are staples like a build-your-own omelette served with tasty brunch potatoes and toast ($10); The Standard featuring two eggs, potatoes, grilled toast and your choice of breakfast meats ($10); or housemade Belgian liege waffles (or pancakes or French toast) topped with berries, blackberry coulis and whipped cream ($12)…

You can also choose from a traditional eggs Benedict ($11) or one of three more creative versions, including a Flat Iron steak benny ($15), andouille sausage and cheddar ($13) or the Crabby featuring a base of house-made crab cakes topped with steamed asparagus, poached eggs and a tasty bearnaise sauce that’s a refreshing change from the usual hollandaise ($15).

The new menu is available during new times. Saz’s will now be serving brunch from 10 a.m. to 2 p.m. Saturday and Sunday.

Executive chef and vice president of food and beverage Alex Sazama describes the “literal and adapated brunch favorites” as “a chef’s dream.” Milwaukee Business Journal’s Sari Lesk details some of the offerings:

The menu items were created based on personal and culinary trips around the globe, according to a news release. Customers can choose from international flavors such as shakshuka, ginger soy glazed pork belly bao benedict and churro pancakes with dulce de leche…

The brunch cocktail menu aims to highlight the flavors among Blue Bat’s collection of more than 160 tequila bottles.

The new brunch service runs from 10 a.m .to 3 p.m. Saturday and Sunday.

On the bunch menu 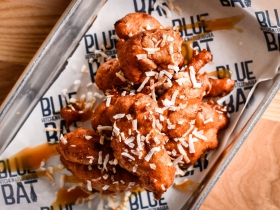 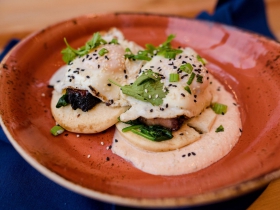 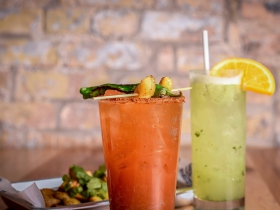 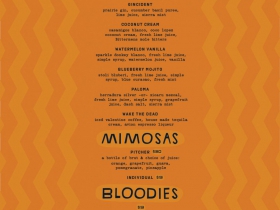 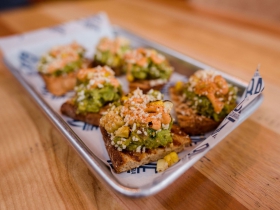 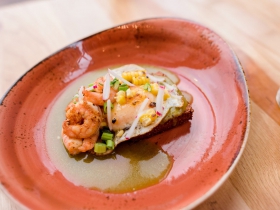 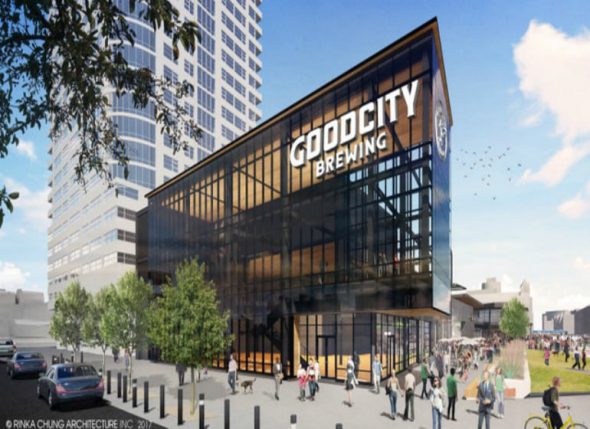 Good City Brewing’s second location has opened at 333 W. Juneau Ave., across from Fiserv Forum. The 11,000-square-foot space boasts a two-story taproom and a new brewery, which will focus on small-batch and sour beers.

News of the opening was confirmed via Twitter. Urban Milwaukee reports:

Reporter Eric Nehm, who covers the Bucks for The Athletic, tweeted last night that the lights were on at the new facility and that he was able to stop in for a “post-game beer.” Bucks vice president Alex Lasry also tweeted: “Nice view from the new @GoodCityBrewing brewpub in the Live Block! It’s open so make sure you hit it up!”

An official grand opening has not been announced, but Good City’s website states that the brewery and taproom are slated to open in “early 2019.” Posts on the brewing company’s Instagram account have been providing updates on the second site’s construction, and photos from four days ago show updates of interior details, including custom tables and the host stand.

According to Milwaukee Business Journal’s Patrick Leary, an official soft opening will take place on Friday, January 25 with beer service and limited hours starting at 4 p.m. Extended hours and food service will be gradually added until the grand opening the weekend of February 22.

Good City is the first business to open in the entertainment center across from Fiserv Forum, and will eventually be joined by a Punch Bowl Social concept and a Drink Wisconsinbly pub. More tenants are expected to be announced in the near future, and the entertainment block is scheduled for an early 2019 opening.

This Is It! Expands

Last week, This Is It! (418 E. Wells St.) opened a 1,2000-square-foot expansion that doubles the bar size. The addition was once part of the Louise’s restaurant. The bar’s co-owner George Schneider took advantage of the Italian restaurant’s closing, and renovated the space to create two more bathrooms, a dance floor and a second bar for This Is It. Schneider and co-owner Michael Fisher had matching light fixtures made and purchased the same carpet as the original bar in order to make the renovations cohesive. OMC’s Molly Snyder spoke with Schneider about the expansion:

“We’ve been waiting a long time for something like this and considered numerous expansion ideas in the past, but nothing was right until this opportunity came along,” says Schneider. “Our customers love us, but what they don’t love is not being able to get in on a Friday or Saturday because we’re at capacity…”

Schneider says business has grown immensely since 2010 – and continues to grow – so space had become a serious issue in recent years. With the addition, This Is It! is now more than twice its original size.

This Is It! was originally founded by June Brehm in 1968. She eventually passed the baton to her son, Joe Brehm, who operated the bar until he died in 2016. This Is It! is Milwaukee’s longest operating gay bar.

The new addition is currently open on Thursday, Friday and Saturday, as well as for special events. Schneider also plans to eventually open the space on Sundays and for a “18+ night for younger patrons.” 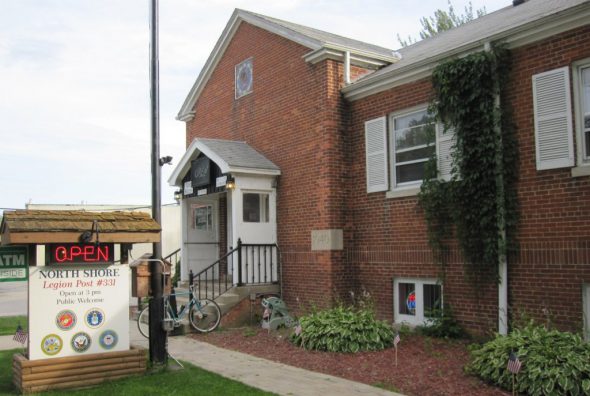 The American Legion Post 331 (4121 N. Wilson Dr.) is now listed for sale, for $625,000, which would be the first time it sold since opening in 1940. General Manager Diane Dowland says the bar and restaurant will operate through Lent, and that it’s “business as usual” for at least the next 90 days.

Snyder writes about the the decision to sell, which was made by the post’s board:

The Shorewood based post served veterans from all branches, as well as the public. It is known by civilians for its friendly bar and restaurant featuring cheap drinks along with great wings and fish fries…

According to Dowland, selling the post was a difficult decision that was in discussion for six months. The post’s board made the decision because the structure needs significant renovations and due to the advanced age of the board members, including commander Larry Fox, who is 76 and ready to retire.