The Hop Has a Schedule

Streetcar begins operating with a public schedule. When will real-time data arrive? 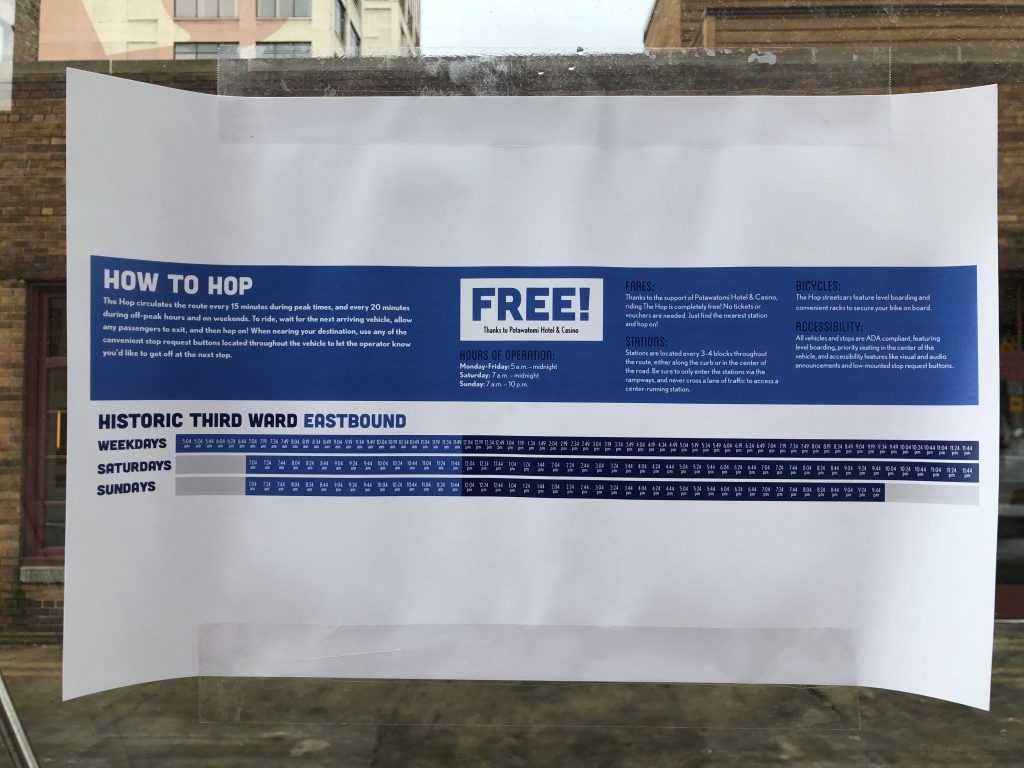 If you want to take a ride on The Hop, you can now look up when and where to do so.

Stations along the streetcar route now have posted schedules indicating when to expect the next vehicle to arrive. Additionally, a master schedule is available on The Hop website.

When the streetcar launched for service last Friday, the public was left in the dark on when to expect the next vehicle to arrive. The system currently operates with 15 to 20 minute headways, meaning a vehicle should arrive at least every 20 minutes even at the slowest service times.

That didn’t seem to discourage people from riding on the opening weekend. Large crowds were spotted on vehicles throughout the weekend, even with the rain on Sunday.

The schedule shows that a ride from end to end on the 2.1-mile-long route takes approximately 18 minutes.

The lack of a schedule generated ridicule from two council members in advance of the project’s opening. Project officials originally said it could take two weeks to make a public schedule available.

“So for the first two weeks [the public] is supposed to just guess when they’re coming?” asked Alderwoman Milele A. Coggs at a meeting of the streetcar implementation committee.

According to City Engineer Jeff Polenske, the city has been adjusting signal timings along the route in recent weeks to facilitate faster service and better on-time performance with an internal schedule. Polenske said the city’s goal is still to achieve 10-minute peak headways and 15-minute off-peak headways.

The schedules posted at the stops reflect the likelihood of future changes to the schedule. They’re not weatherproof, laminated or secured. Instead, they’re simply sheets of paper taped to the glass shelter.

In response to questions from Alderman Robert Bauman in late October, project officials said real-time data on vehicle location and arrival times would be available in December. Real-time data, in use on Milwaukee County Transit System buses since 2014, allows riders to have certainty on when to go wait at a stop by providing continuously updated arrival times based on GPS data from the vehicles.

The system’s first phase connects the Milwaukee Intermodal Station with the Historic Third Ward, East Town and Lower East Side. The first phase has a budgeted cost of $99.24 million. According to a recent report, the project is both on time and on budget.

An extension along E. Michigan St. and E. Clybourn St. to the lakefront is scheduled to open in 2020. The two phases, approved in late 2014, together have a total budgeted cost of $128.1 million.

For more on the system’s history, read our extensive past coverage linked below, or our recent article “11 Things to Know Before You Ride The Hop.”