When Will The Hop Have a Schedule?

Streetcar system could launch without one. 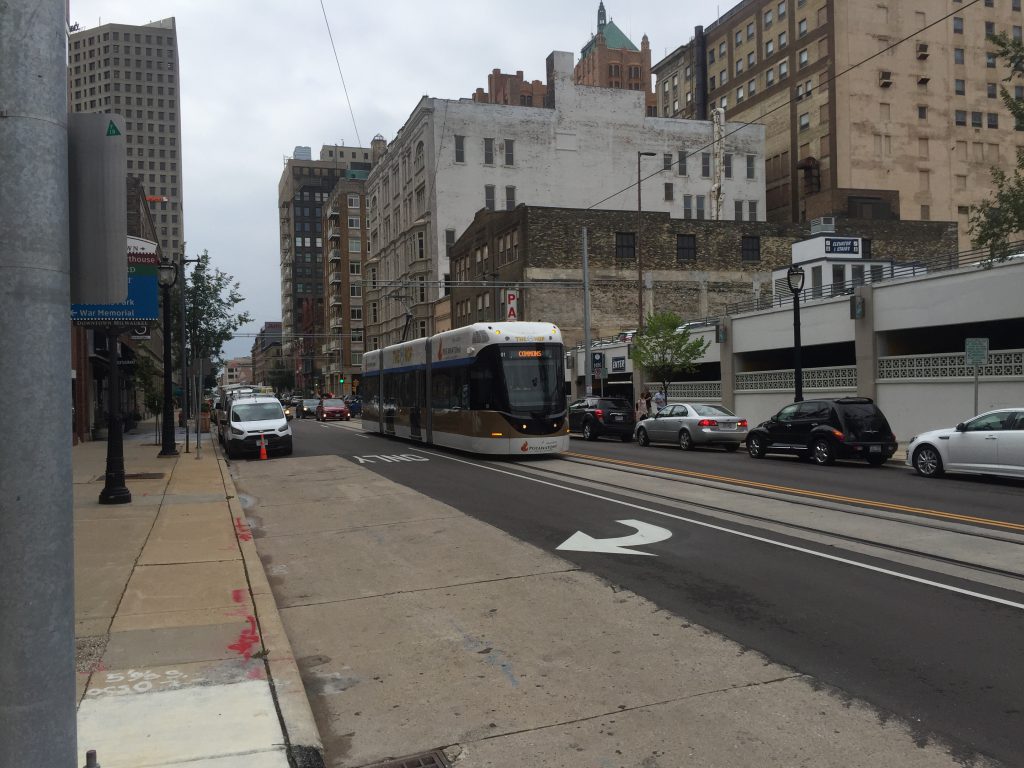 While the streetcar project team got to share the good news Thursday afternoon that the project is both on time and on budget, at least one serious question remains for riders. How will someone know when a vehicle will pick them up?

The operations team won’t operate without a schedule. Transdev general manager Darryll Simpson told the Joint Committee on Downtown Streetcar Implementation that his team has a developed a schedule that is being tested during the streetcar’s current testing, but it’s not currently publicly available. Transdev operates and maintains the system on a contract with the city.

Alderman Robert Bauman asked Simpson when the public would get to see a published schedule. “Within two weeks,” responded Simpson.

“So for the first two weeks [the public] is supposed to just guess when they’re coming?” asked Alderwoman Milele A. Coggs. Simpson said no, but then followed that by saying a printed schedule would only be available if testing goes well next week. He said the Transdev team could install printed schedules on stations overnight before the launch, but other materials may take time to print and distribute.

Following adjustments to the timing of traffic signals along the route, the streetcar team will enter into final testing this weekend said City Engineer Jeff Polenske. Polenske and Simpson both said that improvements to the skills of the operators will also improve the ability of the system to stick to a schedule.

Polenske said service will initially be provided at 15-minute rush-hour headways and 20-minute off-peak headways. Headways, or frequency of service, are a measure of the time between a vehicle arriving at a station.

The city’s lead engineer said the city’s goal has always been to provide service at a 10-minute headway during rush hour and 15 minutes the rest of the day, but that work needs to be done to achieve that goal. Simpson, in response to a question from Bauman, said that the best headway he thinks Transdev could provide with the current configuration is 13 minutes.

Polenske said Milwaukee is not alone in having challenges in launching its streetcar system. “This is not unique to our community. With a new startup there are improvements that will be made,” said Polenske.

“We’re on track to have a great opening and a really, really good start,” said Simpson.

As riders of the Milwaukee County Transit System know, real-time bus location information is even more valuable than a printed schedule. Patrick J. Flaherty told the committee that a vendor is under contract to provide a similar service for the streetcar. He said real-time vehicle location information is slated to become available in December. Similar to the MCTS system, the under-development system will provide data for use in third-party applications and websites. Flaherty said discussions are ongoing with MCTS to see about incorporating streetcar real-time data into the official Ride MCTS smartphone application.

The Hop will start serving the public on 1 p.m. at November 2nd. Two vehicles will leave from Cathedral Square Park, with other vehicles departing from the Milwaukee Intermodal Station and Burns Commons stations.

On Friday live music starts at Cathedral Square Park at 11 a.m., with a ceremony planned for noon. A ribbon cutting is planned for 12:45 p.m. Music is planned to continue in the park until 2 p.m.

Saturday is “Hop-In for Business Day.” Customers can upload receipts from businesses along the route to The Hop website for a chance to win cash prizes, according to a presentation by a representative from streetcar marketing consultant 2-Story. “Milwaukee in Motion,” a “multi-modal transit fair” will take place in Burns Commons with representatives from The Hop, MCTS, Bublr Bikes and other transportation providers.

Sunday is being targeted towards families. A variety of local organizations will host activities at the stations along the route. Free admission will be offered at the Grohmann Museum and Milwaukee Jewish Museum.

More information on the opening is available on The Hop website.

How Has COVID-19 Impacted Child Care Providers? by Erik Gunn