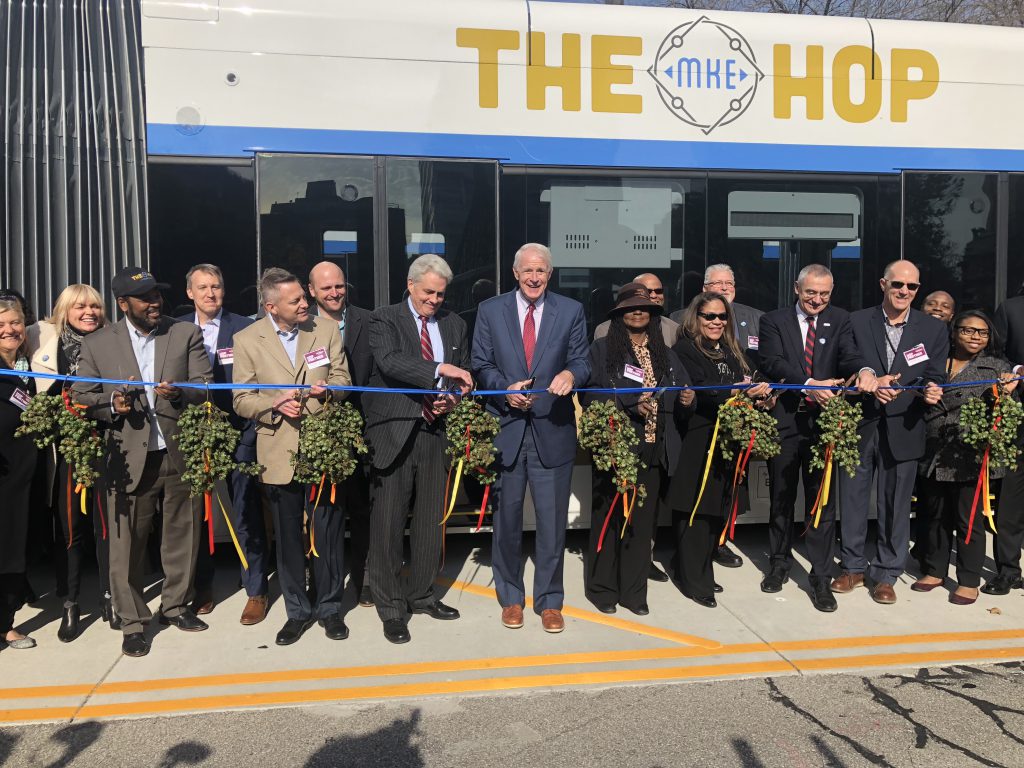 Ribbon cutting for The Hop. Photo by Jeramey Jannene.

“The purpose of this is to bring people and places together,” said Mayor Tom Barrett at an hour-long ribbon cutting ceremony Friday afternoon for The Hop streetcar system.

Barrett, in a speech thanking all of the city employees and contractors involved in the system’s creation, told the audience “this is not your grandparents’ streetcar.”

A large crowd had lined up to ride the vehicles before the ribbon, laden with actual hops plants, was cut.

The system’s 2.1-mile-long first phase connects the Milwaukee Intermodal Station with the Historic Third Ward, East Town and Lower East Side. The first phase has a budgeted cost of $99.24 million. According to a recent report, the project is both on time and on budget.

Project construction funding came from a federal grant dating back to 1991 ($54.9 million) and tax-incremental financing districts.

Rides will be free for at least the first year due to the Potawatomi sponsorship and a Congestion Mitigation and Air Quality grant from the federal government.

Federal Transit Administration regional director Kelley Brookins was on hand for the system’s launch. The FTA, and former President Barack Obama, drew praise for their support of the project,

The system was built by infrastructure contractor Kiewet. Vehicles were manufactured in Pennsylvania by Brookville Equipment Corp. The city has hired French firm Transdev to operate the system. Milwaukee-based 2-Story Marketing was hired to market the system and manage communications. HNTB provided design and engineering services on the system’s design.

An extension along E. Michigan St. and E. Clybourn St. to the lakefront is scheduled to open in 2020. The two phases, approved in late 2014, together have a total budgeted cost of $128.1 million. The second phase received a positive news bump Friday morning when news broke that The Couture, which the streetcar will run through the base of, had secured financing.

The Black Panthers made their presence felt in the crowd with chants of “no justice, no peace,” led by King Rick. Barrett paused his speech to allow the group to “exercise their first amendment rights.”

A number of high-ranking city officials could be found in the crowd at the event. Among them were council members Milele A. Coggs, Ashanti Hamilton, Nik Kovac, Russell W. Stamper, II, Chantia Lewis, Michael Murphy and former council member Jim Bohl. The mayor’s former chief of staff Patrick Curley was there, as well as the current chief of staff Paul Vornholt. State representative Fred Kessler was there, as well as state senator Chris Larson. Police chief Alfonso Morales and sheriff-elect Earnell Lucas were seen talking in the crowd.

For more on the system’s history, read our extensive past coverage linked below, or our recent article “11 Things to Know Before You Ride The Hop.”

The system does not have a posted schedule, but one is coming in two weeks according to the streetcar management team. Real-time data is expected in December.

The opening celebration, dubbed the “Grand Hop-ening,” runs through Sunday. More information is available on The Hop website.

2 thoughts on “Eyes on Milwaukee: Streetcar Opens to Public”