Another Contractor Caught With Gun

Another American Sewer worker caught with a gun, company forfeits another contract. 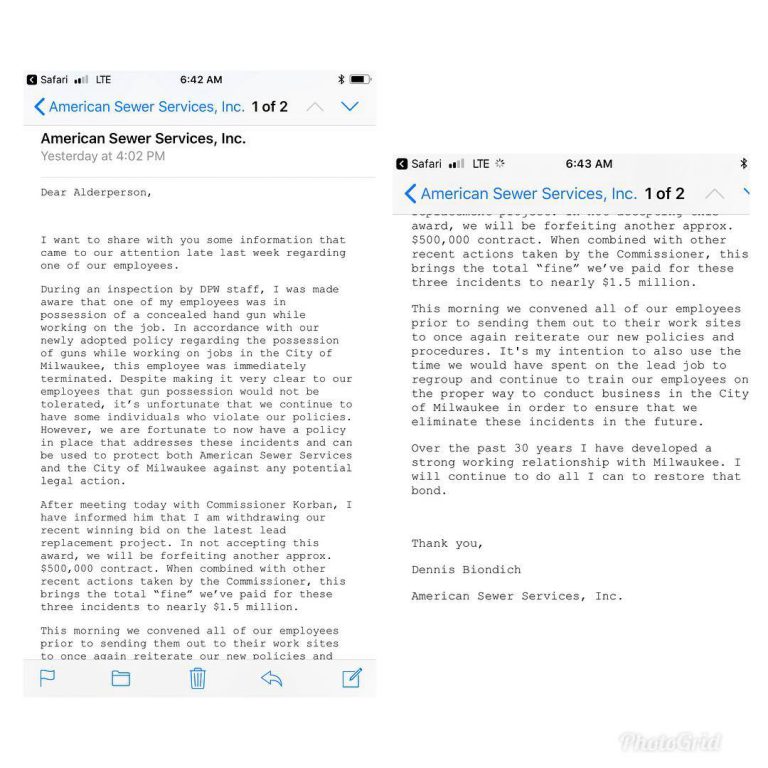 Email to Alderwoman Milele A. Coggs.

Yet another employee of American Sewer Services has been caught with a gun on a city job site.

Alderwoman Milele A. Coggs shared a photo of an email from firm owner Dennis Biondich, with Biondich reporting that the employee was immediately terminated and the company will forfeit another contract.

Biondich says the handgun was found during an inspection by the Department of Public Works.

Consequences came swiftly this time for Hartford-based American Sewer. In the email, Biondich states: “After meeting today with Commissioner [Ghassan] Korban, I have informed him that I am withdrawing our recent winning bid on the latest lead replacement project. In not accepting this award, we will be forfeiting another approx. $500,000 contract. When combined with other recent actions taken by the Commissioner, this brings the total ‘fine’ we’ve paid for these three incidents to nearly $1.5 million.”

Biondich has yet to appear before the full Common Council, sending a low-level employee in his place in December. Multiple members of the council characterized the move as “disrespectful.” In a statement, Biondich cited health issues as the reason for his failure to appear and agreed to meet with council members one-on-one.

Korban confirmed to Urban Milwaukee that a DPW site inspection did find the gun. The inspection was routine according to Korban, with the gun only being noticed in a photo of a lead lateral replacement.

5 thoughts on “Eyes on Milwaukee: Another Contractor Caught With Gun”