The Milwaukee Common Council has approved a settlement agreement between the city and embattled contractor American Sewer Services. The Hartford-based contractor will lose two contracts valued at a combined $891,586. Since 2013 the firm has received approximately $50 million in city contracts.

American Sewer has come under intense scrutiny following the discovery of their employees openly carrying firearms on a job site on November 30th. That scrutiny was amplified after another firm employee was spotted with a cooler bearing stickers representing the Confederate flag and Ku Klux Klan, and further escalated when the firm’s owner Dennis Biondich failed to appear before a city committee.

The council unanimously approved the agreement today, despite Aldermen Robert Donovan and Mark Borkowski speaking against the measure when it was before the Public Works Committee.

The council is still likely to subpoena Biondich to appear before a council committee. An additional resolution is held in committee that would begin the process of debarring American Sewer from bidding on city work. 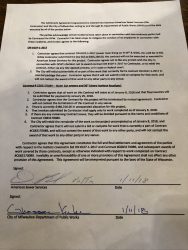 The agreement, negotiated by Public Works Commissioner Ghassan Korban, terminates one contract with $486,318 of work remaining and terminates the bidding process for another contract for sewer relining near N. 45th St. and W. Wells St. where American Sewer was the low bidder at $405,268.

Under terms of the agreement, American Sewer may not contest either of the terminations or contest the city’s rebidding of the contracts.

The agreement was signed by Korban and Biondich on January 11th.

Korban had previously told the Public Works Committee that he analyzed the 11 open contracts the firm has with the city to reach the deal. Five of the seasonal contracts are effectively complete and just awaiting final payment or approval. The remaining six were examined for how much work was left and who was scheduled to do it. Korban noted that since city contracts include provisions that require hiring minority-owned firms and underemployed or unemployed city residents for some of the work, “what is the point of taking work away from people who really weren’t related to these incidents?” Korban added that he also considered whether canceling the work would negatively impact the city.

Korban’s settlement proposal came after Ald. Russell W. Stamper, II introduced a resolution to terminate all of the firm’s contracts. But Stamper supports the compromise measure.  “I want to thank the commissioner for understanding, recognizing and realizing the importance of what occurred,” Stamper said.

5 thoughts on “Eyes on Milwaukee: City Settles with American Sewer”