"We'll shout the fascists down, Milwaukee is a union town." 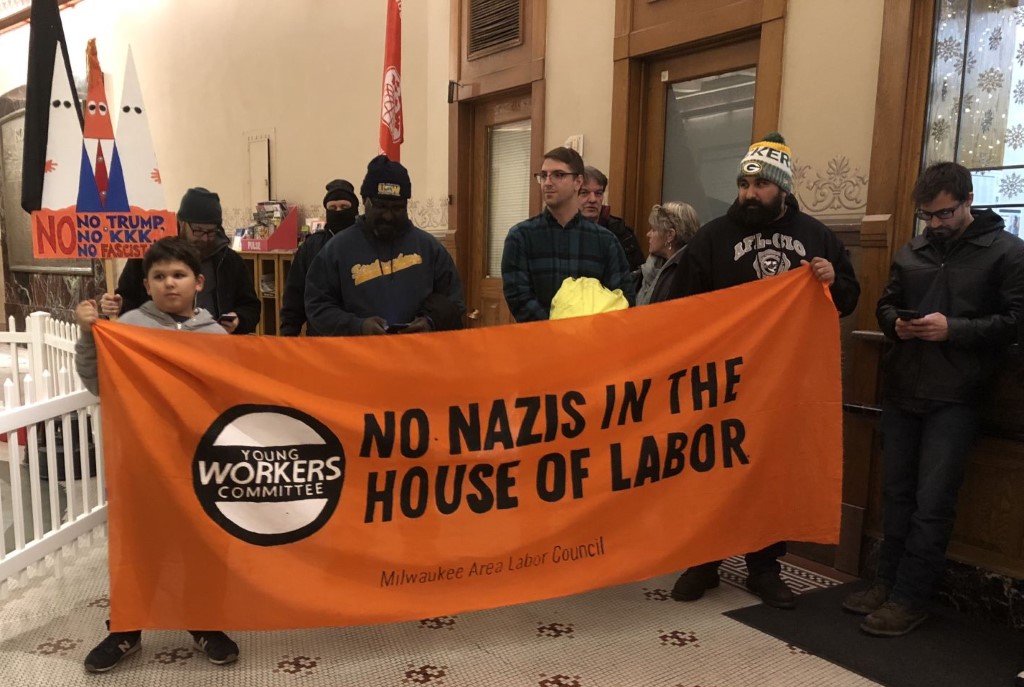 “No Nazis in the house of labor.” Photo by Jeramey Jannene.

“Not in our town, not in our state, we don’t want your Nazi hate.”

That was the opening chant at a rally in the City Hall rotunda directed against a city contractor whose worker displayed white supremacy stickers. Approximately 100 people gathered Monday evening to denounce the union member who displayed the symbols at a city job site.

“We got a good victory today” said event emcee Jacob Flom. He was referencing the announcement that American Sewer Services has fired the employee responsible for bringing a cooler to a city job site that displayed Confederate Flag and Ku Klux Klan stickers. Flom serves as the chair of the Young Workers’ Council of the Milwaukee Area Labor Council.

“That sticker represents about 150 years of Klan terror,” Flom told the audience before ticking off a long history of violence against unions and their members.

Clarence Nicholas, 1st Vice President of local NAACP chapter, spoke of a need for the city to move toward using less outside contractors and more work by city employees to better reflect the city’s majority-minority population. That idea is likely to be debated by the Common Council in the future as Alderman Robert Bauman has endorsed studying the measure.

Deandre Jackson, a member of United Auto Workers local 469, said “I usually have to call higher ups before I come up and make a statement, but this is a no brainer. The KKK is not welcome here.”

Rob Odom, pastor at Central United Methodist Church, denounced the presence of hate in Milwaukee. Odom says he moved to Milwaukee years ago to escape the KKK. Central United is one block from N. 25th St. and W. Wells St. where the cooler was spotted.

The rally ended with a chant of “we’ll shout the fascists down, Milwaukee is a union town.”

American Sewer Services is scheduled to appear before the Common Council’s Steering and Rules Committee on Thursday morning. Equipment on their job site has been spray painted in recent days with the message “racists go home” and other messages denouncing white supremacy.

The rally was sponsored by the Young Workers Committee of the Milwaukee Area Labor Council, AFL-CIO, the Coalition of Black Trade Unionists and The Milwaukee Dr. Martin Luther King Justice Coalition. 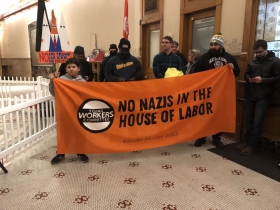 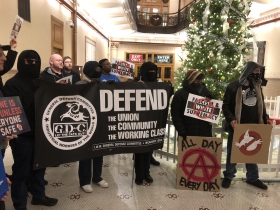 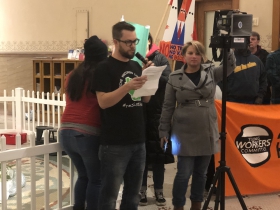 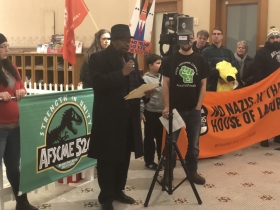 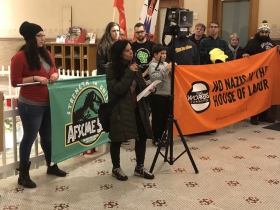 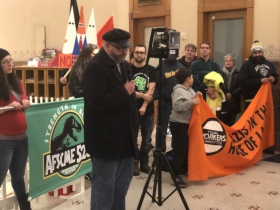