Ban On Contractors With Guns Passed 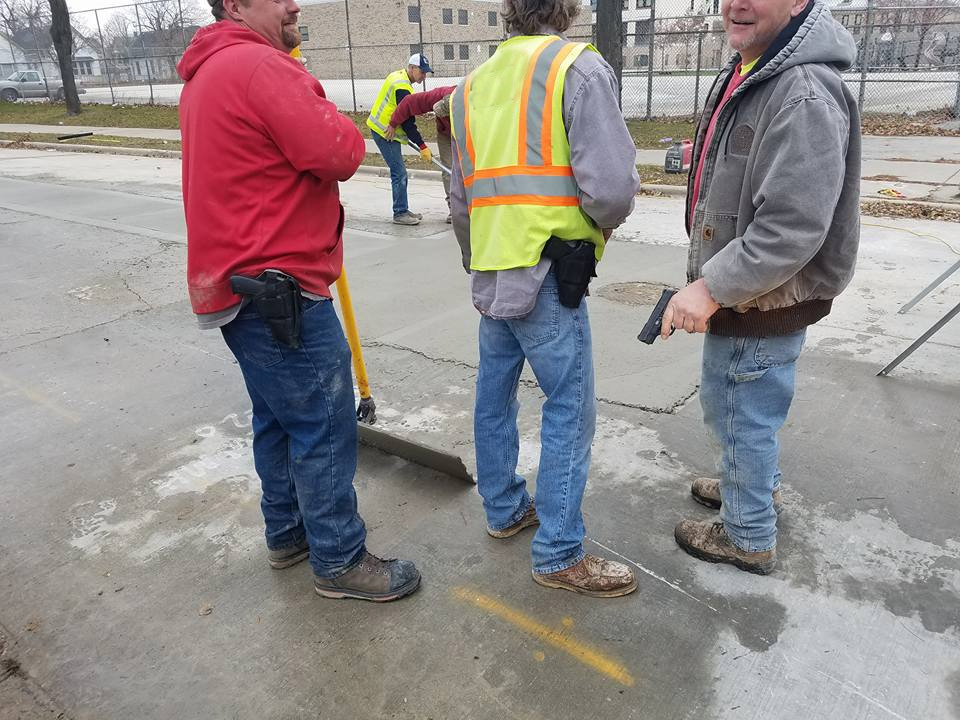 The Common Council voted unanimously to direct the City Attorney and Department of Public Works to update city contract language to ban outside contractors from carrying weapons on city job sites. The move comes after three employees of American Sewer Services were photographed openly carrying firearms, with one brandishing the weapon.

The move would place contractors in line with existing city policy that bans city employees from carrying weapons.

The directive stipulates the contract language would apply to contractors and their sub-contractors. But it would not affect existing city contracts.

The directive further orders city contracts be updated to prevent contractors from wearing vests of other firms. The move comes because the infamous gun photo pictured American Sewer employees wearing vests from Poblocki Paving. The photo, which was first posted on Facebook, triggered misplaced outrage towards Poblocki.

Following a unanimous vote by the council, the Department of Public Works must now report back to the council on the feasibility of ending outside contracting for city infrastructure and bringing that work in-house.

Ald. Jim Bohl expressed his belief that the report could be expensive and likely “grim” in its assessment of the feasibility, but ultimately voted to approve it. Bohl argued that introducing the directives in council instead of through the committee process set a bad precedent.

The idea of bringing the work in-house was first broached publicly by Ald. Robert Bauman at a hearing to discuss the city’s potential response to the gun photo. The idea has been endorsed by other council members as a means to get more city residents involved in contracting.

Ald. Milele A. Coggs spoke in favor of authorizing the study as the first step towards analyzing the issue. “I think the conversation actually comes once we have the facts.”

How many more jobs that could be created for city residents remains to be seen.

At a hearing yesterday, a statement read by an employee of Hartford-based American Sewer Services declared that 50 percent of the firm’s workforce resides in the city. That number would certainly rise if the work is brought in-house, but by how much now that city employees are no longer subject to a residency rule? Urban Milwaukee recently reported that 22 percent of city employees now live outside the city.

Further complicating the matter, multiple sources have confirmed that the now-terminated employee that displayed Ku Klux Klan and Confederate Flag stickers on a cooler is a resident of the city’s South Side.

After the meeting, Ald. Russell W. Stamper, II reiterated his support for ending the city’s long-standing relationship with American Sewer Services. “Yes, I support a termination of his contract, and I wish I could do it immediately, but I can’t. We have to do with evaluation and judgement. But I can tell you community, get ready, because there are going to be some contracting opportunities out there.”

Stamper was not pleased that American Sewer Services owner Dennis Biondich did not show up for yesterday’s special hearing regarding the company. “Not to show up for a meeting shows a lack of respect for the council, for the city,” Stamper charged.

A city report notes that American Sewer Services has received approximately $50 million in city contracts since 2013.

5 thoughts on “Eyes on Milwaukee: Ban On Contractors With Guns Passed”