Construction of track is 90 percent complete, project ahead of schedule. 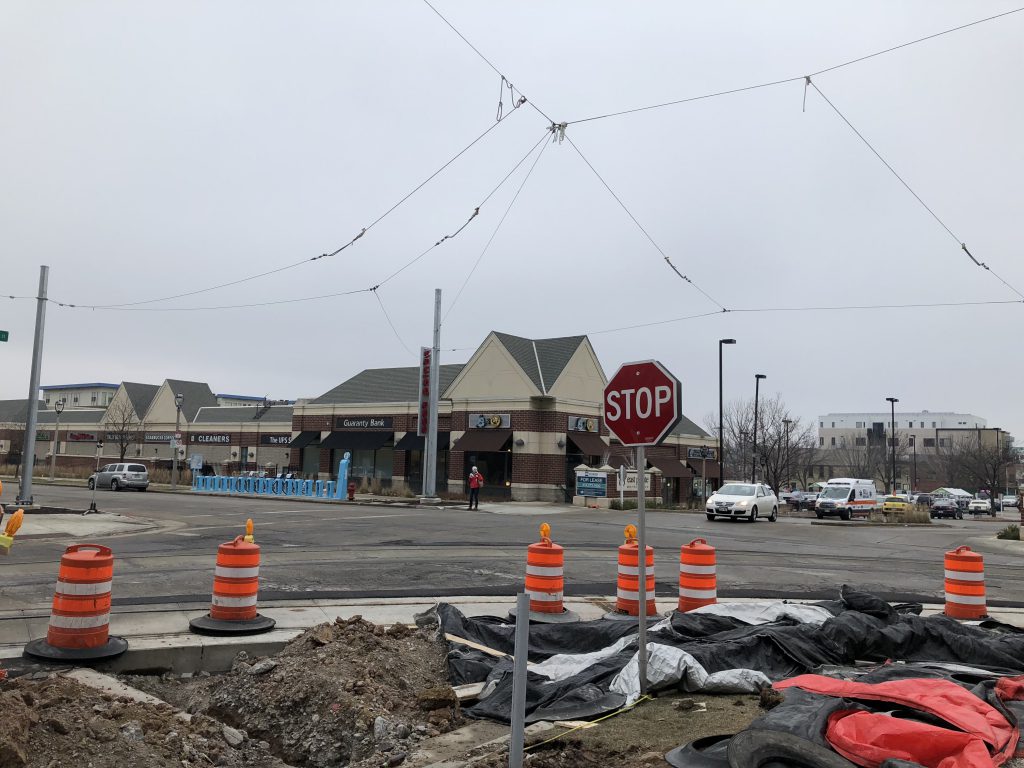 Work has started on the overhead contact system at E. Ogden Ave. and N. Jackson St. Photo by Jeramey Jannene.

Construction of the Milwaukee Streetcar is running ahead of schedule. Track work on the system’s first phase, which connects the Lower East Side, East Town, Historic Third Ward and Westown neighborhoods, is 90 percent complete according to the city. Construction on the $128 million system is being led by contractor Kiewet Infrastructure. The city has spent $65 million on the project so far.

The accelerated construction pace won’t result in the system opening earlier, but will result in fewer road closures and other disruptions for area residents and visitors in 2018. The only remaining track sections to be built include the segment crossing the St. Paul Bridge (scheduled for January) and sections of N. Milwaukee St. and E. Kilbourn Ave. (scheduled for spring as weather permits). Ten of the 17 station platforms have been completed.

The first phase of the system is scheduled to begin operating in late 2018, with the Lakefront Line coming online in late 2019.

City officials were provided an update on the project at Friday’s regularly scheduled meeting of the Joint Committee on Downtown Streetcar Implementation.

The construction pace drew praise from Department of Public Works Commissioner Ghassan Korban, who said: “I do want to commend Kiewet and their construction team for completing a phenomenal amount of work in one season.”

City Engineer Jeff Polenske attributes the fast pace to the warm and dry fall weather. Track construction activity will drop off now that the temperature has fallen and ramp back up once weather permits.

Even with the cold weather, crews will still be busy installing the overhead contact system, which consists of poles and wire. This work is already nearing completion on E. Ogden Ave. Parking stalls are temporarily occupied by construction equipment while this work is underway.

Kiewet, in partnership with a number of local firms, is currently exceeding contract requirements regarding the hiring of unemployed or underemployed city residents. Through October 180 individuals participating in the city’s Resident Preference Program have completed 44 percent of the construction’s work hours. Kiewet is required to meet a 40 percent participation threshold.

It was Patrick J. Flaherty, who serves as the city’s owner’s representative in his role at The Concord Group, who informed the committee that $65 million has been spent on the project to date. The first two phases of the project have a combined budget of $128 million. The system is being funded in part by $68 million in federal grants.

Of the $65 million expended, $45.3 million has gone towards construction, $4.36 million for vehicles and $15.50 million for professional services. Nothing has been spent from the contingency fund.

Transdev, a multi-national private firm that won a competitive bidding process to operate and maintain the system, is developing all of the documentation required to train their staff. This includes standard operating procedures, maintenance plans and safety plans.

The city previously reported $30 million had been spent on the project as of May.

The delivery of the first streetcar vehicle from Brookville Equipment Corp. is expected to happen in early 2018. The company has a contracted delivery date in late February and appears to be on track, no pun intended, to meet that contract according to Polenske.

The city has ordered five vehicles to date. The first three are 50, 25 and 20 percent complete according to a city report. The city reports that members of the project team have been having bi-weekly meetings with the Pennsylvania-based manufacturer.

The vehicles will ultimately be stored in a yard under Interstate 794 in Westown. The yard is located immediately east of the Operations and Maintenance Facility that is being built along N. 5th St. That building, being constructed by CG Schmidt, is now sealed and heated. Construction on the building is expected to be complete in February.

Firms looking to market the system have a busy Christmas and New Years holiday season ahead of them. Responses to a request for proposals are due on January 5th. The winning bidder will be involved in building out the brand for The Hop, as the system is planned to be called following a 12-year, $10 million Potawatomi Hotel & Casino sponsorship deal.

In an effort to keep the work local and in accordance with other contracts in the deal, 18 percent of the work must be completed by a certified Disadvantaged Business Enterprise. Alderwoman Milele A. Coggs, a proponent of the measure, confirmed that the DBE requirement was included in the contract.

For more on the RFP, see our November 20th column “Who Wants to Market the Streetcar?”

5 thoughts on “Eyes on Milwaukee: $65 Million Spent on Streetcar”