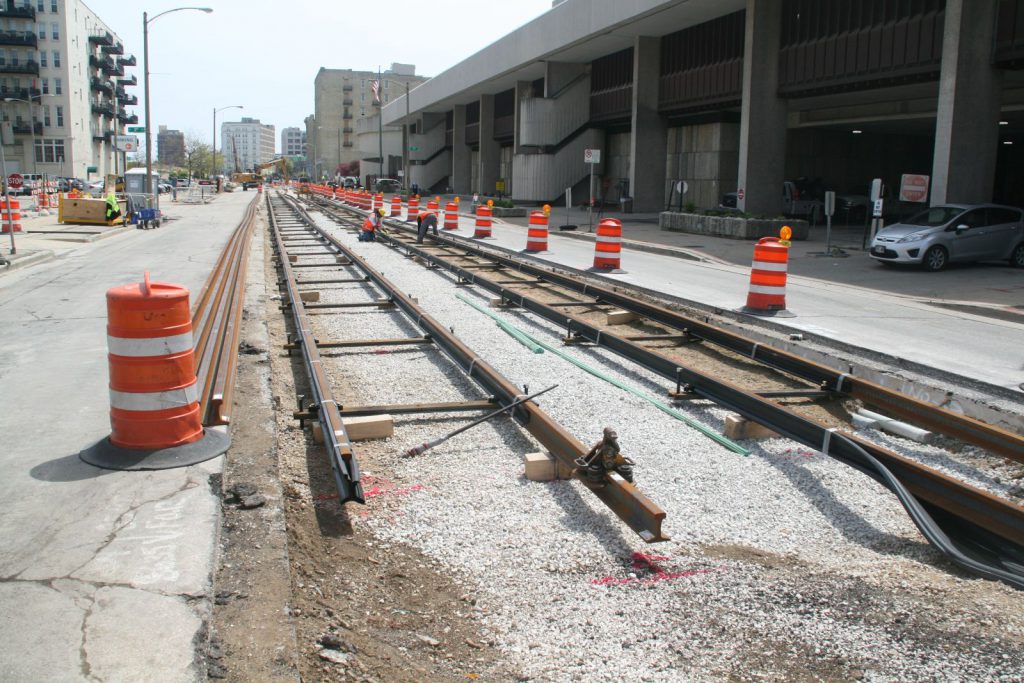 More than 20 years after the federal funds for the project were originally approved, Milwaukee is moving forward on the Milwaukee Streetcar. Kiewet Infrastructure is leading the general contracting on the $127.64 million project and is quickly ramping up the pace of construction. To date the city has spent $28.24 million on the project.

As we reported last week, crews have begun laying the steel rails for the system on W. St. Paul Ave. This week a successful, 50-foot concrete test pour was conducted that locks the rail in place. That 50-foot segment of track on W. St. Paul Ave. is now complete and crews will soon begin conducting pours 300 feet at a time. By the end of June drivers will be able to drive on top of that stretch of track, well before streetcar vehicles begin running on it.

Work on a single-track stretch of the route along N. Broadway will ramp up next week. Traffic barriers were installed this week that leave only one south-bound lane open. Next week excavation for the track guideway will begin. According to construction manager Carolyn Geilings, Kiewet and the city are continuing to coordinate with various area festivals on a detailed construction schedule to minimize the impact of construction.

Kiewet and various subcontractors are employing approximately 36 people to build out the system with an additional 15 individuals serving on a project management team, according to Geilings. That number will rise as construction ramps up in the coming months and an operator is announced. The city conducted a number of interviews with potential operators following a RFP issued in February and is now negotiating a contract with one vendor. An announcement is expected this summer.

CG Schmidt is leading the construction of the operations and maintenance facility. That building is being constructed underneath Interstate 794 between N. 4th and N. 5th St. Crews are currently constructing the structure’s foundation. The building will need to be substantially complete by December when the first vehicle arrives from Pennsylvania-based Brookville Equipment Corp.

According to a presentation by Patrick J. Flaherty of The Concord Group, which serves as the city’s owner’s representative on the project, $30.5 million of a budgeted $127.64 million has been expended on the project to date. Flaherty broke down the figures at a Friday morning meeting of the city’s Joint Committee on Downtown Streetcar Implementation. From the $80.28 million construction budget for the first two phases, $12.11 million has been spent. The city has spent $4.36 million out of a budgeted $23.84 million on vehicles. And in the broad category of “professional services” the city has spent $14.03 million out of a budgeted $16.28 million. No funds have been spent from a budgeted $7.24 million contingency fund. All figures reflect a combined cost of both the initial route and the lakefront extension.

NOTE: An earlier version of this article reported the total spent as $28.24 million. That number was incorrectly reported by the streetcar project team at a committee meeting, although the underlying numbers were all correct.

Kiewet expects to complete construction on the first phase of the streetcar in the second quarter of 2018 when testing of it would commence. Construction on the lakefront spur is expected to begin at that time.

Public operation on the initial route connecting the Milwaukee Intermodal Station and Westown with the Historic Third Ward, East Town and the Lower East Side is scheduled to begin in the fall of 2018 following route testing. The lakefront line extension is expected to begin operating in the third quarter of 2019. The system, including the lakefront line, is estimated to cost $127.64 million, of which $69.1 million comes from federal grants.

Utility work is wrapping up along the initial route. That work, which has been underway for over a year, has moved block by block throughout the route. We Energies and other utilities are hiring their own crews for that work and are being reimbursed by the city.

Last Friday the Q-Line opened in Detroit. The 3.3-mile route runs primarily along Detroit’s main street, Woodward Ave. At a meeting this morning regarding the Milwaukee project, Department of Public Works Commissioner Ghassan Korban stated that “we’re learning from some of the things they’re experiencing.” HNTB, who leads engineering work on the Milwaukee project, serves as the owner’s representative on the Detroit project.

4 thoughts on “Eyes on Milwaukee: $30 Million Spent on Streetcar”