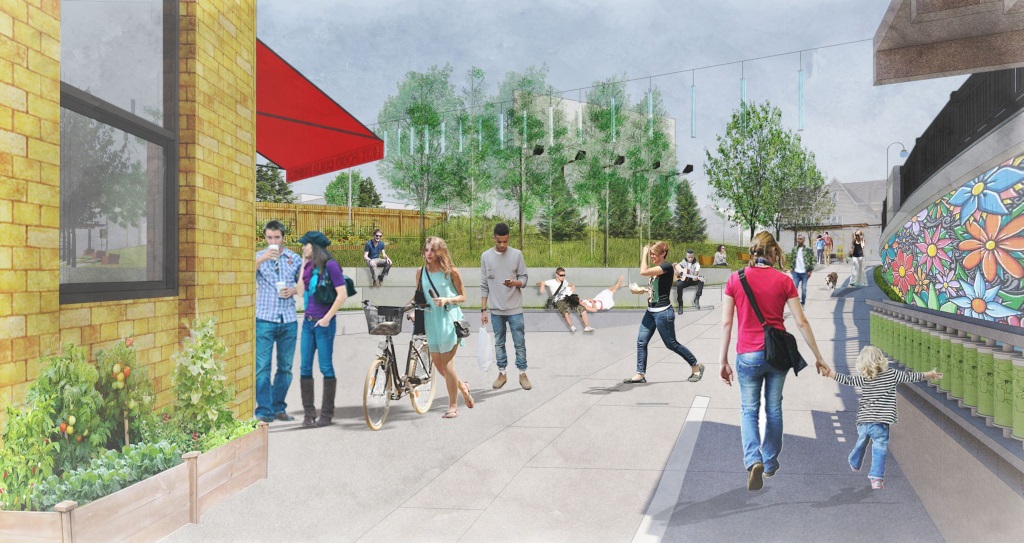 Alaa Musa, the owner of Casablanca restaurant will purchase a former lift station at the southeast corner of N. Water and E. Pearson streets, located just west of his business, and turn it into a seasonal walk-up restaurant. A lift station is a kind of pumping station that lifted wastewater from lower to higher elevation, and this particular one is the distinctive octagonal structure found directly south of the former Trocadero restaurant and across the street from the Marsupial Bridge and Swing Park, a newly-popular destination. Within sight are hundreds of new apartments built by Atlantic Realty Partners in the River House.

An accompanying redesign of the adjacent pedestrian/bicycle path between E. Brady St. and the lift station will make the area more user-friendly, and will incorporate a neighborhood Groundwork Milwaukee community garden established in 2015.

The announcement of the project was made Tuesday at Casablanca, 708 E. Brady St., during a Spring Forum held by the Brady Street Area Association. Musa is the 2016 Chair of the Brady Street Business Improvement District #11, and is a House Confidential Honoree.

A presentation was made by Chris Socha of The Kubala Washatko Architects, who now works out of the firm’s new office on S. 5th St. Socha gave a clue as to the value of the formerly desolate and derelict spot. He said that his step daughter, age 7, says “let’s go to swing, Daddy!”  — referring to the popular Swing Park.

The old lift station, which is about two stories high yet descends seven stories deep, is owned by the Milwaukee Metropolitan Sewerage District. It is located at the west end of the Brady Street neighborhood, which has taken a longer time to redevelop than the section east of N. Humboldt Ave. That development was complicated by the presence of a four-acre abandoned tannery site where the River House is now rising. As has been reported by Urban Milwaukee, the intersection of E. Brady and N. Water streets is complicated and in need of reconstruction. Brady Street also “dies” at this spot, and is not instantly identifiable.

Socha says one key to enlivening this area is to create an “Oak Leaf Trail” bicycle identity for the path through this area. The Holton Viaduct offers bicycle travel on two levels, which is unique in Milwaukee. 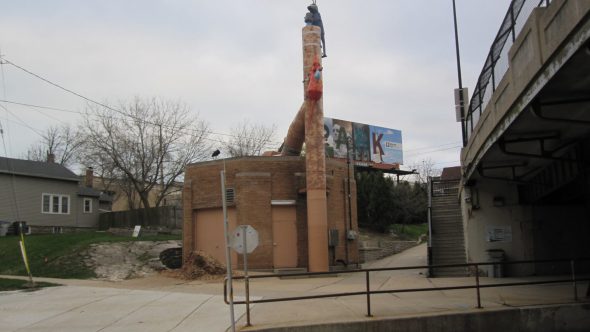 He also hopes the project will create a “dialogue with the neighbors,” he said. A plaza at the north end of the La Dallman Architects designed 1999 bus shelter will be redesigned. “Nobody uses the bus plaza,” he said. The plaza, adjacent stone walls and other features were built of Story Quarry stone salvaged from an 1880s-era neighborhood building, and donated by Julilly Kohler, who has been instrumental in creating the existing path and adjacent prairie garden.

Socha says his plans will visually and physically connect Brady Street with the Swing Park, making it and the surroundings more visible. When things are out of view, he says, people tend to feel vulnerable.

Socha also says a goal of the project is to give people a “reason to pause” and consider: “Is it a passage? Or simply a path?” His proposal will “give people a reason to slow down,” he said.

A wall mural is proposed for the general vicinity. The Holton Viaduct and adjacent structures practically demand such a treatment.

The new plaza and walk-up restaurant will “heal a fragmented environment and beautify the habitat,” he said, and create an “all-seasons people place.”

Socha says an existing stone wall composed of fossilized Silurian Dolomite will be removed to accommodate the plaza and pavilion. It did not appear that he had any plans to incorporate the ancient seabed feature into the plaza, which is in its conceptual stage. The landscape stone has endured in place for decades and is of much higher quality than that customarily quarried today. It, and remnant pieces of the stone from the 1880s house, could readily be incorporated into the project in some area. 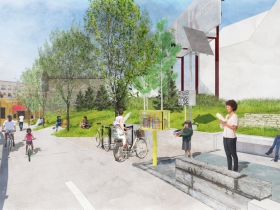 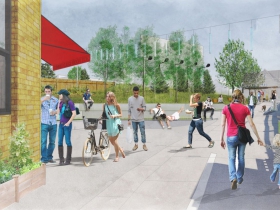 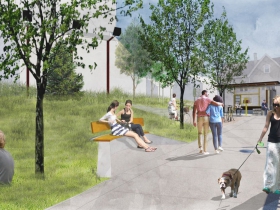 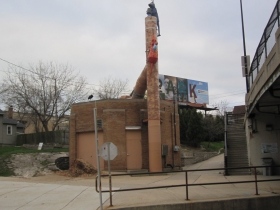 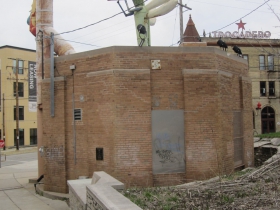 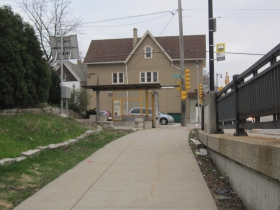 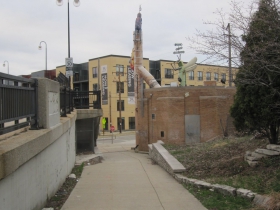 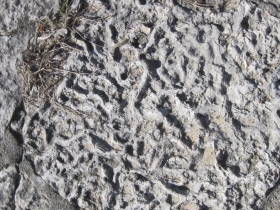 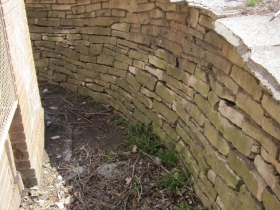 One thought on “Plenty of Horne: A Lift For Brady Street, Swing Park”