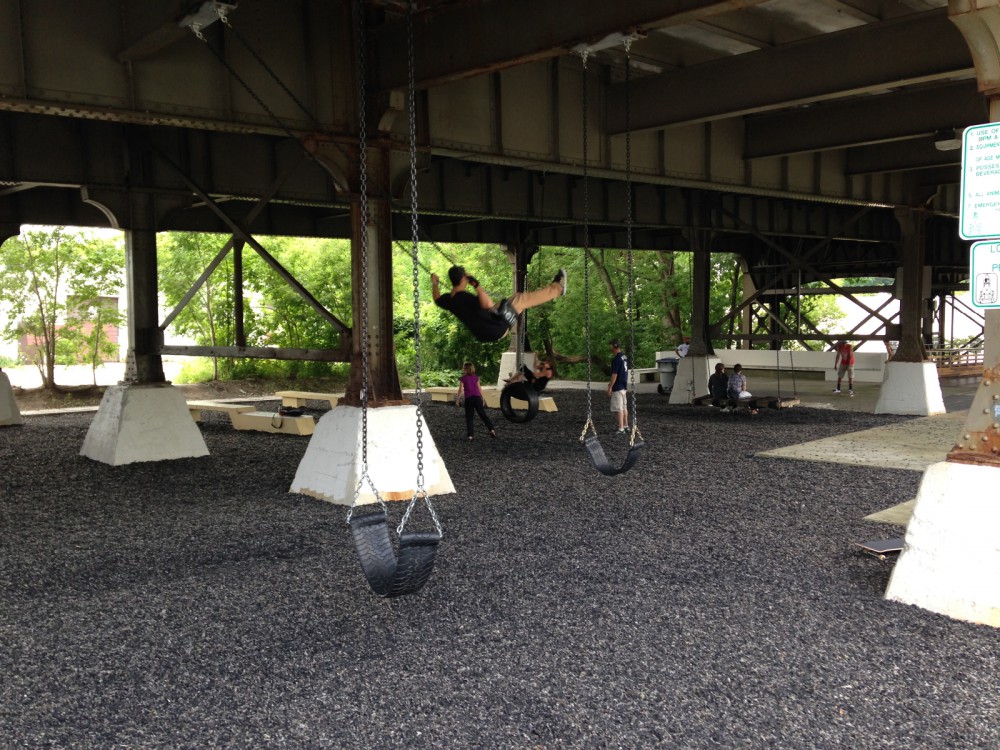 About 150 residents and concerned citizens, many of them bicyclists, met at Casablanca Restaurant, 728 E. Brady St. to discuss safety concerns after a double homicide earlier this month at the Swing Park, located at the Holton Marsupial Bridge, a block to the west of the restaurant.

The swings for which the park is named were installed in September, 2012 by Keith Hayes, Willie Fields and Jeff Haneline, who did so with no announcement, authority or approval whatsoever in what amounted to an civil engineering equivalent of guerilla gardening. The collaborators sought to enliven the “Media Garden” located at the east end of the span, and the swings did just that. They were taken down for a period of time by the authorities, but thanks to community support and the efforts of the alderman, they were reinstalled according to the standards governing playground safety.

The swings were popular, and the site has been used without incident for many public events, including movies, concerts and gatherings like the Underwear Bicycle Ride. It is the only checkpoint in the Riverwest 24 bicycle race not located in that neighborhood. This year police have initiated 70 stops in the vicinity, usually for noise complaints around 10 p.m. Then came the fateful evening of August 6th, when a 21-year old and a 17-year old were shot dead there, among four killed by gunfire in a 24-hour period.

The mayor told the audience, “All four homicides in 24 hours had one thing in common: two opposing parties and each had guns.” It was revealed for the first time that the confrontation had occurred when the groups approached each other from opposite ends of the bridge. There a conflict ensued, and some participants later fled toward the swing park. It proved to be a dramatic site for a murder investigation, and the television news stations made the most of it, prompting some to call for the removal of the swings and the closure of the park.

Those who were expecting an angry town hall meeting were disappointed. It was clear from the audience response that the majority favored keeping the swings.  Some wore stickers reading, “Protect the Swing Park,” issued by a group called MKE Residents for Public Spaces. The police captain said patrols have been added to the site and would continue. Improved lighting and granting police remote live access to security cameras there is also in place. “We’re in the process of allowing the desk sergeant to see the cameras,” Captain Rowe said.

Officer Kline reminded the audience of the state of affairs before the 650-foot Marsupial Bridge was suspended beneath the viaduct in 2006. The space was unlit and littered. “It was a homeless camp,” he said. On the opposite end, “where Lakefront Brewery is now — that was a high prostitution area.” This comment brought a nervous titter from the audience and a blush to the cheeks of Russ Klisch, the founder, president and owner of the brewery, who was among the attendees. Today, Lakefront Brewery is among Milwaukee’s top 10 tourist destinations, and is responsible for a good deal of the bridge’s foot traffic.

Kovac pointed out that proposals to eliminate the park, or to close it off would be shortsighted. It is, after all, a bridge as well as a public space. The space needs more, not less, activity. The bridge received the $10,000 Rudy Bruner Award for Urban Excellence in 2007. The award noted that the design allowed “for uses of the space that would be spontaneous and largely unanticipated,” in the words of Julilly Kohler, who conceived of the project while kayaking beneath the bridge in 1993.

During a request for comments, Frank Alioto took the microphone. He is a retired Milwaukee Fire Department Captain who once headed the now-deactivated Brady Street Engine House 6. He has lived in the neighborhood for decades and remembers past scares about public spaces. “I’m speaking in favor of keeping the swings,” he said. He recalled an incident in the past when “they wanted to get rid of the basketball hoops at the Reservoir.” A similar situation prevailed at the Cass Street Playground when some neighbors didn’t want people to use the courts there. “Put up the rules, and enforce them,” Alioto said to applause.

There was some concern about the vacant property to the south of the bridge, a development site owned by Wangard Partners. The alderman promised that the owner would maintain the site. Musa said he had spoken to the developer who assured him that he still plans to develop the mixed-use building planned for the location at Brady & Water.

Musa also addressed the former MMSD lift station, which is located on a path leading from Brady Street to the marsupial bridge. That path, with a custom bus shelter, landscaped plaza and prairie garden, was installed in 1999 in anticipation of the Marsupial Bridge as well as to clean up and activate a derelict area. In April 2017, Musa announced plans to refit the octagonal structure as a walk-up restaurant. He told the audience that he plans to open next spring.

Barrett also addressed gun violence and police funding as a state political issue. He said legislation must be passed that will limit guns, “specifically repeat felons,” who are armed. He also reminded the audience that “for the past three years the budget for the entire Milwaukee Police Department is larger than the entire property tax.”

Said the man who ran and lost twice to current Republican Governor Scott Walker, who is now running for a third term, “We need a better relationship with state government.”