Last month a group of urban activists led by Keith Hayes decided to hang some swings from the Holton Viaduct, figuring it would further animate the “Media Garden” there.

[If you have trouble viewing the video of Pop Up Park installation you can see it here.] 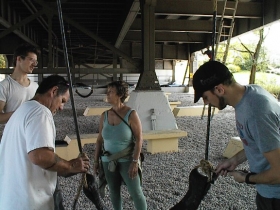 Hayes is the founder of a group called BeInTween, which he subtitles “Improv(is)ing Spaces” (Hayes has a thing for wordplay). He calls his group a “social + spatial network of opportunistic sites and creative minds who favor collaboration and improvisation in diverse urban settings.”

They also get things done, including recycling dozens of used tires into the swings now under the bridge.

The Edward D. Holton Viaduct is a working monument to the city’s Socialist legacy. This muscular structure, built in 1926, was designed by city engineers during the administration of Daniel Webster Hoan. It has outlasted many younger spans.

Eighty years after the Holton opened to traffic (which at the time included a streetcar), the Marsupial Bridge was dedicated. This 650 foot pedestrian span was suspended beneath the viaduct and connected the Beer Line “B” neighborhood with the vibrant Brady Street neighborhood. In so doing, it revitalized an urban “remnant” that had been unsightly and vagrant, suggesting it might be a dangerous place. 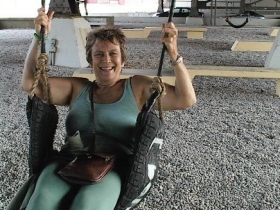 The Marsupial bridge was the idea of Julilly Kohler who conceived of it one day in 1993 while kayaking down the Milwaukee River. She saw its potential to mitigate the blight beneath the bridge as well as to “connect and reconnect our city’s neighborhoods,” as she put it.

After years of efforts, including trips to Washington, D.C. to lobby Senator Herb Kohl and then-congressman Tom Barrett, Kohler was successful in securing federal funding for the project through earmarked Congestion Mitigation Air Quality funds.

Part of the plan, developed by La Dallman Architects, was the construction of a “Media Garden” on the east side of the span. The space was envisioned as a gathering place for planned and unplanned activities.

According to a report on the bridge by the Rudy Bruner Foundation, which awarded it the $10,000 Rudy Bruner Award for Urban Excellence Silver Medal prize in 2007, “Julilly Kohler states that it was their intention to ‘build it and get out of the way,’ allowing for uses of the space that would be spontaneous and largely unanticipated.”

Fast forward to 2012, and the place is crawling with spontaneous and unanticipated things.

“I love it,” Kohler said, on her visit to the swings one day while Hayes and his crew were putting finishing touches on the project. This spontaneous art project is exactly what she envisioned for the media garden, which has had a growing list of activities since it opened, including such planned events as the Milwaukee Bike-In Movie Series hosted by the Bicycle Federation of Wisconsin education program manager Jake Newborn, its prominence as the only East Side checkpoint on the Riverwest 24 Hour Bicycle Race and such unplanned happenings as being a gathering place before, after (and sometimes during) the Milwaukee Underwear Bike Rides organized by Steve Roche.

Hayes, of the swing set, sees the installation as a catalyst for yet another of his cleverly titled causes, the artery, “a linear park that seeks to embrace and enhance community by reclaiming a former 2.4 mile RxR corridor with interactive art and edible landscapes.”

The artery is the only anomaly in the otherwise perfect grid of Riverwest, and has been nicely finished in the area around Cafe Corazon, 3129 N Bremen St.

But the plan is to continue the path northwest of the Keefe/Richards intersection, where today it has the same sort of desolate feeling that the Holton Bridge had before it became today’s swinging place. This is clearly evident from an aerial photograph seen here.

The artery will incorporate “matireal” (there he goes again!), which is a clever way to recycle used tires into a paving / planting medium.

Hayes and his collaborators plan to explain all this and more at a free fundraising event Friday, October 19th from 6p.m. to 1a.m. at the Media Garden of the Holton Viaduct.

The event will coincide with the Bicycle Federation Bike-In movie presentation of The Lost Boys at 8 pm, and will be a stop on the Art Milwaukee Art Bus, as is Urban Milwaukee headquarters and store (it is Fall Gallery Night and Urban Milwaukee’s Sydney HiH Retrospective  as well that evening.) 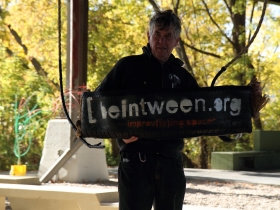 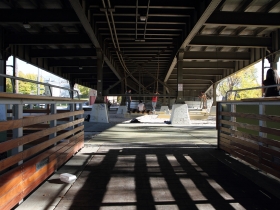 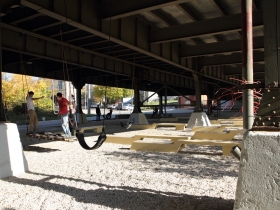 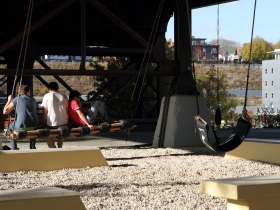 At the beginning of his concert Saturday, October 13th 2012 at the Northern Lights Theater, Alfred Matthew “Weird Al” Yankovic had some advice for the young and musically inclined of his audience: “After 30 years, if you work hard, you can headline the Potawatomi Bingo Casino!”

Indeed. It is doubtful that any entertainer’s fame to capacity ratio exceeds Yankovic’s, a point that was made abundantly clear during the two hour set that included numerous video excerpts of Weird Al mentions from the entire spectrum of American popular culture.

This included Homer Simpson’s observation that “he who is tired of Weird Al is tired of life.” There were no tired people at the theater, which although smaller than Yankovic would like it to have been (he has bills to pay, after all), was filled to its 500 seat capacity for a rollicking set distinguished by Yankovic trademarks like turn-on-a-dime musicianship and a haberdasher’s fantasy of costume changes. Even the band members were costumed-to-order for the wide range of songs performed. You get the feeling that at least one of Weird Al’s tour buses is a rolling closet.

Weird Al’s claim to fame — and this reviewer encountered nobody from 13 to 80 who had not heard of him — is his wicked parodies of songs from virtually every popular artist of the era. He takes his targets dead (Kurt Cobain) or alive (Justin Bieber, Lady Gaga) and slices them, dices them, and lays them out for the audience’s delectation.

But it is wrong to consider Weird Al as a mere parodist — one who puts his own lyrics on others’ tunes. It is better to say that Yankovic is a bright and highly original thinker who uses parody as his means of expression.

As a Billboard review of “Alpocalypse,” his 13th album, which is the focus of his current tour, says, Yankovic creates “listenable musical statements that endure long after the subject they lampoon is forgotten.”

Yankovic delves into the pop culture fetishes of the day, whether they be TMZ, which celebrates celebrity stalking, or the over-the-top Lady Gaga, in “Perform this Way,” in which Yankovic boasts, “I’ll wrap my small intestines around my neck and set fire to myself on stage.” Charles Nelson Reilly, a minor cultural figure who may indeed be already forgotten, gets a posthumous reincarnation as a blood-crazed avenger.

Although Weird Al can be arch and ascerbic, there is a sweetness to his bite that enables his persona to remain quite lovable. This is in contrast to Frank Zappa, one of his inspirations, who was basically a jerk. Like Zappa, Al is a conscientious worker with a fine sense of double-entry bookkeeping. In this sense of being the master of his career, Yankovic also brings to mind the Grateful Dead, another group that achieved iconic status by playing the fame game on its own terms. Zappa, the Dead and Yankovic have a fame that will likely endure despite a lack of support from the Music Establishment, a lack of airplay on the radio, and in Weird Al’s case, playing a stadium-sized show in an “up close and personal theater.”

9 thoughts on “Plenty of Horne: The Holton Bridge Swings”