And why the total snub for 'Love & Friendship’?

One measly nomination for “20th Century Women”? That was not the intention of producing companies Annapurna Pictures, Archer Gray and Modern People, as this reviewer has discussed.

It’s awards that help keep East Coast financiers interested in an era when most films need these multiple sources. That’s why most movies’ introductory logos convey a multitude of unknown investment companies, many of whom are also doled out “executive producer” credentials.

It takes a lot of cooperative money — sometimes strange money. As hedge fund manager, new Treasury Secretary Steve Mnuchin invested some $500 million in films, but he also used the fortune he amassed on Wall Street, and working for Goldman Sachs, and running his own bank, to finance other movies well into 2016, earning constant executive producer designations.

He actually has one film in the Oscars – a sound editing nomination for “Sully,” directed by Clint Eastwood. It also clearly had broader Oscar hopes and pumped in vain for Tom Hanks as best actor.

The “20th Century Women” partners carefully released the film in New York and Los Angeles in December before turning to general release the following year — clearly hoping for deeper Oscar recognition at the last minute for more nominations than the one they got.

Similarly “Loving” chose a November release though ready six months earlier. Its Oscar hopes were barely realized, not even a best picture nod in an expanded field of nine despite director-writer Jeff Nichols’ previous credentials and an entertaining cast.

Joel Edgerton is remarkably good as the strong silent type — Richard Loving, a reticent reluctant public figure even when sentenced to a year in prison in Virginia for interracial marriage. But only Ruth Negga landed an Oscar nomination as his wife in a performance of luminous compassion and determination – and recognition that she is a star in the making.

Negga’s Mildred, as seen by writer Nichols, is factually fabricated to make her environment friendlier and her heritage not the partial American Indian the real Mildred claimed in interviews but more outspokenly “black.” But the performance contains its own truths about human behavior even more than about the landmark Loving case.

The Lovings couple took their 1950s legal troubles to the Supreme Court in the 1960s and won an end to miscegenation laws nationwide — certainly a timely reminder of the importance of the courts in social progress. The acting, the historical significance and the truthfulness of government indifference have kept the film around, which is not the fate of other 2016 entries that failed to win big respect at the Oscars.

(Looking back and being blunt, the producers of “Captain Fantastic” — a July release that landed a best actor nod for Viggo Mortensen — and crime thriller “Hell and High Water,” August release yet four Oscar nods and strong box office, are probably wishing they had pushed Hollywood voters even harder.)

Documentary and foreign film specialists can probably signal Oscar overlooks (though bravo for the documentaries including “I Am Not Your Negro”). But credit the Academy voters generally for coming down to mostly respectable choices (except for the strange placement of star Viola Davis of “Fences” in the supporting actress character and inserting Octavia Spencer there, the weakest performance but biggest female name in “Hidden Figures”).

Never pretend there isn’t a lot gamesmanship behind the scenes — nor how obvious it is when studios give up despite positive sounding press releases. A case in point is “Love & Friendship” despite the awards track record of films based on the works and late blooming popularity (after more than two centuries!) of Jane Austen (“Sense and Sensibility,” “Pride and Prejudice”). The clarity of that times’ class structure and the pertinence of Austen’s verbal skewers always hold out great opportunity for film-making. 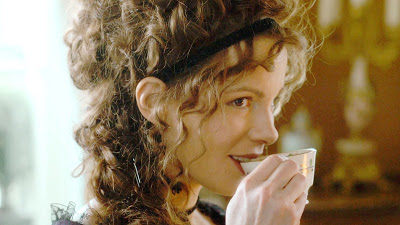 Faithfully adapted by director Whit Stillman from the Jane Austen novella “Lady Susan,” the production promised elegant 18th century fashion and humorous dissection of the battle of the sexes, focused on an endlessly scheming penniless widow who uses her looks and shy daughter to force a lucrative outcome.

It was plugged hard in June . . . then quietly moved to Amazon’s DVD market by September. The industry pretty much knew then the producers had given up hope that either well-known Kate Beckinsale as Lady Susan or Chloe Sevigny as her gossipy confidante would gain awards attention.

Quite right, too, because Beckinsale is concerned more with elegant style than internal conviction about Lady Susan’s powers over men, an essential dramatic element even in comedy. Sevigny’s amused arched eyebrows are similarly not enough.

The film cannot be saved by some inventive visuals to keep the complicated plot from tangling – or  even by those delicious Austen bon mots. (Lady Susan’s vicious wit is on constant display: one targeted husband is  “too old to be governable and too young to die”; a miscarried scheme brings the Trump-like complaint, “Facts are horrid things.”)