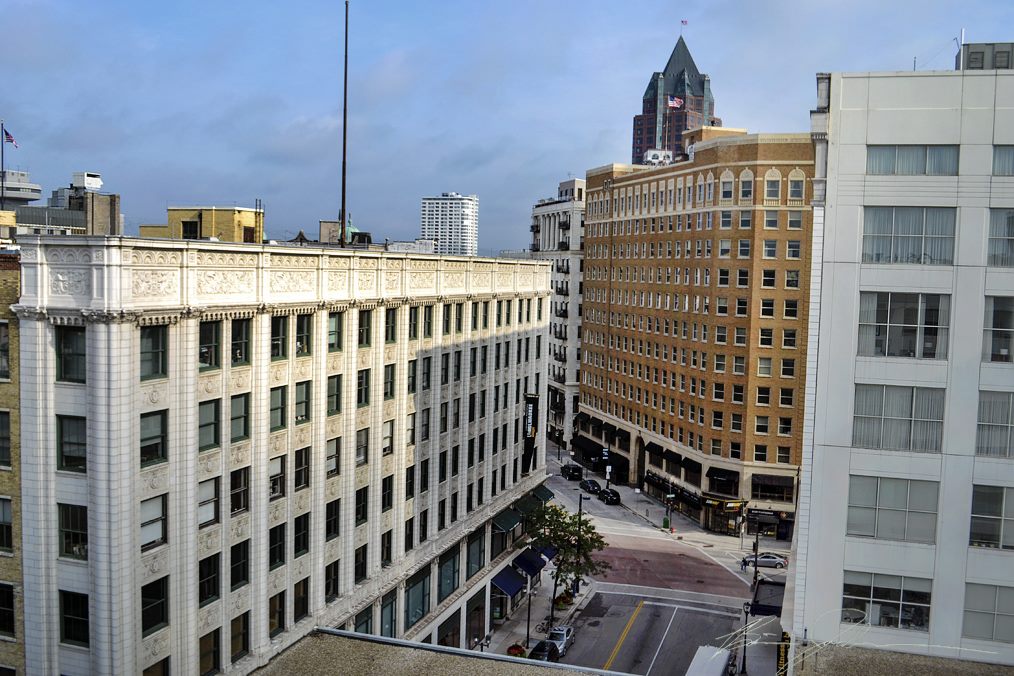 A view down Plankinton Ave. Photo by Brian Jacobson from the Vantage Point series.

One of the most common names for a street that runs along a body of water is, not surprisingly, Water Street. Each of the three settlements that ultimately formed the city of Milwaukee had a street along the Milwaukee River by that name. To reduce the confusion, they were given directional distinctions. For nearly a century, Kilbourntown’s entry, west of the river, was known as West Water Street, while Juneautown’s was East Water Street and the one in Walker’s Point was called South Water Street.

The six-block long West Water Street though, had to have its name changed. The decision of what to rename it was easy. Two of the six blocks contained Plankinton buildings. The premier eight-story Plankinton Hotel was between Clybourn and Michigan Streets and the seven-story Plankinton Arcade was between Michigan Street and Wisconsin Avenue. The Arcade, today part of the Grand Avenue Mall, had replaced an earlier Plankinton House hotel, the leading facility of its kind in the city during its heyday. So in 1929, West Water Street was renamed North Plankinton Avenue (“Avenue” was considered classier than plain old “Street”).

The buildings and the street were named for John Plankinton, who was born in Delaware in 1820. After arriving in Milwaukee at age 24, he opened a butcher shop that would be the beginning of his financial empire, which included meat packing plants in Milwaukee, Kansas City, New York and other cities, as well as real estate, railroad interests and other endeavors. At various times he was in partnerships with meatpackers Frederick Layton, Philip Armour, and Patrick Cudahy.

His hotel was his hobby and he spared no expense in assuring it was first class. He brought in dynamos to furnish it with electric lighting, the first such illumination in the city.  He was a civic-minded man and when he built a mansion on Grand Avenue, he required that it be built only of local materials and solely by local craftsmen. Plankinton died in 1891 at age 71 and is buried in Forest Home Cemetery.

The city of Plankinton, South Dakota was named for him, recognizing him as a director of the Milwaukee Road railroad, and Patrick Cudahy laid out East Plankinton Avenue in Cudahy, the meatpacking town he was developing, shortly after the death of his former partner. 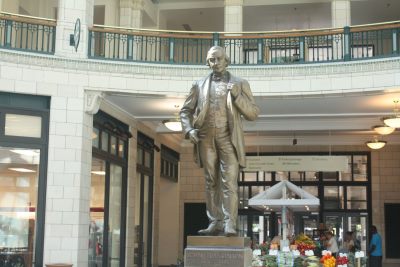 Inside the Plankinton Arcade there is a statue and a portrait of John Plankinton. A marker there tells us that General Douglas MacArthur at one time lived in the old Plankinton House hotel that was formerly on the site. His grandfather, Arthur MacArthur, Sr., was a Milwaukee judge, and his father, Arthur MacArthur Jr., was career military man. Arthur Jr. and Douglas were the first father and son to each win a Medal of Honor (President Teddy Roosevelt and his son, Ted Jr., were the others). Arthur won his as an 18-year-old member of the Milwaukee Regiment during the Civil War because he “seized the colors of his regiment at a critical moment and planted them on the captured works on the crest of Missionary Ridge,” according to his citation. Douglas received his as a 62-year-old for his leadership in the Pacific Theater during World War II.

The south end of North Plankinton Avenue starts at the Menomonee River where the Pritzlaff Building has been converted to an events facility. The block to the north is all concrete and weeds, thanks to the freeway. There is an historical marker in the block north of Wisconsin Avenue showing where the temporary home for Civil War soldiers was located from 1864 to 1867, before the National Soldiers’ Home was built on West National Avenue (now the VA Medical Center). The site of the temporary home is now occupied by a huge, concrete cylinder that is part of a parking structure.

North of West Wells Street is a statue commemorating the 100-year anniversary of the founding of the National Association of Letter Carriers. The founding took place in 1889 in a building on North Plankinton Avenue across the street from the statue which was erected in 1989.

The north end of the street terminates at West Kilbourn Avenue, where the old Second Ward Bank now houses the Milwaukee County Historical Society‘s museum and archives. The cornice of the building, which was completed in 1913, has badly deteriorated and is wrapped to prevent debris from falling on passersby. It will take several million dollars to repair it but no funds are in sight.

North Plankinton Avenue used to run along the east side of the former bank but it was vacated to help create Père Marquette Park. According to a commemorative plaque in the park, Father Jacques Marquette set up camp along the river at that site in 1674. There is also a statue of the priest and two markers commemorating the 350th anniversary of his birth – one in English, one in French. The gazebo in the park is the focus of River Rhythm concerts and other activities. 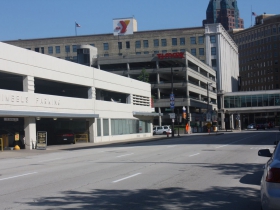 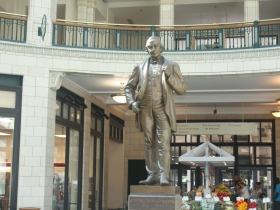 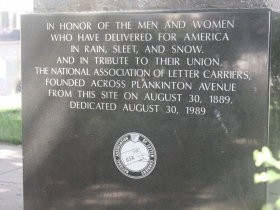 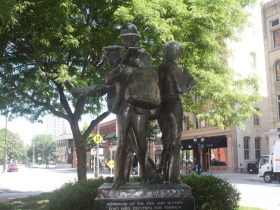 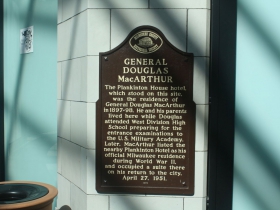 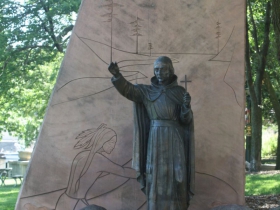