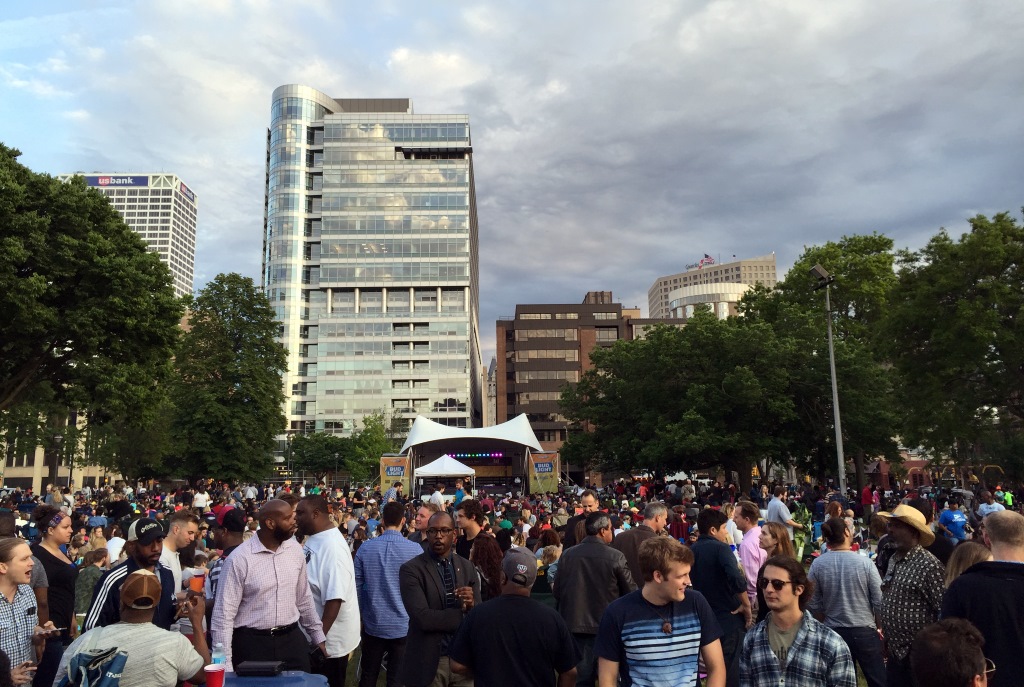 Jazz In the Park in Cathedral Square. File photo by Dave Reid.

Solomon Juneau and Morgan L. Martin donated Cathedral Square for a courthouse in 1837. The pair wanted the civic building in their Juneautown settlement on the east side of the Milwaukee River, rather than having it in the rival village of Kilbourntown on the west side.

Having the county courthouse in their village would give it prestige and a certain legitimacy, as well as drawing people to its side of the river. The pair got their way, and the new courthouse was built on the northern part of the square. Their donation came with the proviso that the land should be for public use only, with ownership reverting to the partners if it did not.

A lot has changed since those days. Among the countless changes are the names of two of the streets that border the square, and the name of the square itself.

The square’s southern border was on Oneida Street. While you might expect a Milwaukee street to be named for a local tribe, this street recognized the Oneida tribe located near Green Bay. Juneau had been a resident of that city and Martin still lived there when they chose the name. In 1926, Oneida Street was renamed E. Wells Street for Kilbourntown’s Daniel Wells, a decision Juneau and Martin would probably have fought, since Wells was one of their competitors.

The two developers also named Biddle Street, to the north of the square. John Biddle was an Indian agent at Green Bay and later a Michigan politician. In 1929, his name was removed from Milwaukee’s map and replaced with that of Byron Kilbourn, a decision Juneautown’s founders (who despised Kilbourn) would have found sacrilegious.

After the courthouse was erected, and for the next century, the city block was known as Courthouse Square. The southern part was planted with trees and became Milwaukee’s first park.

But it needed work. It included a hole that was usually filled with water and was variously described as a pond, a swimming hole, or a reservoir. A committee formed to decide its future referred to it as “a miserable mudhole” and a “public nuisance.” It was filled in and sod was added to parts of the grounds during the 1850s. Some people complained that children should not be allowed to play there because they were destroying the new grass. Others felt that children should not play there because there was so much manure from pigs and grazing cows that it was unsanitary.

Courthouse Square served as a meeting place for residents to hear speeches on the issues of the day. The Temperance and Abolition movements, as well as a wide range of political meetings, were big draws. It was also the site for entertainment, including a circus and Fourth of July celebrations. Memorial services for national and local figures such as fallen presidents Abraham Lincoln and James Garfield took place there. 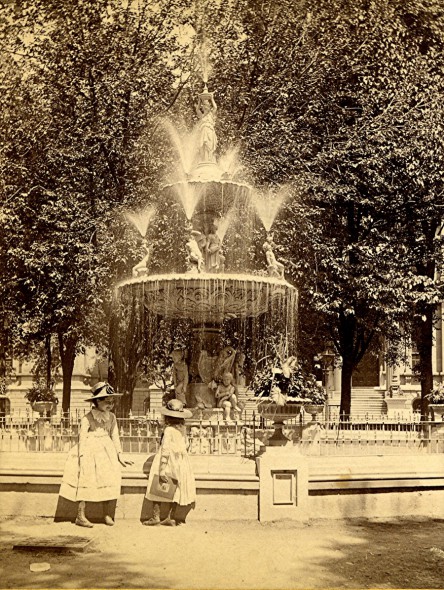 In 1853 the Cathedral of St. John the Evangelist, which would later lend its name to the square, was completed across Jackson Street. In 1854, several thousand residents mobbed the square to free an escaped Missouri slave, Joshua Glover, from the jail at the courthouse. From there he was taken by horse-drawn wagon to join the underground railroad on his trip to freedom in Canada.

In 1861 another mob, of a few hundred residents, marched to Courthouse Square to take another Black man from the jail. Marshall Clark was involved in the murder of a Third Ward man. The mob, with virtually no resistance from the authorities, took Clark to the Third Ward where they lynched him.

Fifteen years after the courthouse was constructed, it was described as “old and rickety,” but it was another twenty years before it was razed and replaced by a second courthouse in 1873. The new, much larger structure was also built on the northern third of the grounds and included city offices as well as county facilities. The new, grander building became a source of local pride and spurred many positive changes to the park.

Courthouse Square was landscaped. Trees were thinned and some were transplanted. Footpaths were laid out and graveled, and all open areas were laid with new sod. A hugely popular concert series featuring the Christoph Bach Band and other musical groups became a weekly event during the summer over the next few years. The bandstand was located very close to where today’s stage is for Jazz in the Park and other performances. Newspapers reported that the concerts drew all classes of respectable citizens and that, despite the crowds, there was “no rude behavior.”

On August 15, 1877, the square’s crown jewel was installed. It was an ornate, 18-foot-tall fountain including statues of women, cupids and seashells. The top and middle tiers overflowed into the large basin at the bottom. It incorporated multiple spray jets and was colorfully painted. The basin was sea green, the cupids were blue, the shells pink, and the female statue on top was yellow and wore a red dress.

In 1931, a third courthouse was built, this time in Kilbourntown, and that meant dramatic changes to the square. After years of discussion about the future of the second courthouse, it was torn down in 1939. With no courthouse in Courthouse Square, the general feeling was that it should have a new name. 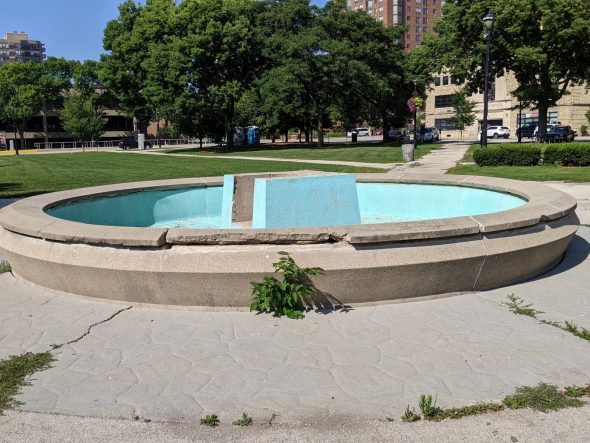 The second fountain basin is an eyesore. Photo by Carl Baehr.

Italian residents proposed calling it Columbus Square and said they would raise the necessary funds to build a memorial to Christopher Columbus. A veterans group wanted to name it Veterans Memorial Park, a name chosen years later for the landfill park to the east on Lake Michigan. Since the Cathedral of St. John was the primary focus of many pictures from the square and had served as a backdrop for photographs of the fountain, it was the popular choice for the new name, Cathedral Square.

Since that time, the old fountain and basin were replaced by another fountain. It too has been removed, but its crumbling basin, unfortunately, is still there. A statue of the Immigrant Mother and a playground have been added. Cathedral Square has hosted Jazz in the Park, Bastille Days, and other concerts, as well as a variety of other activities including a farmers’ market, yoga classes, and a place to eat lunch. With construction starting on an updating of the perimeter of the square, the city’s oldest park will be a more inviting and pleasant place to visit. 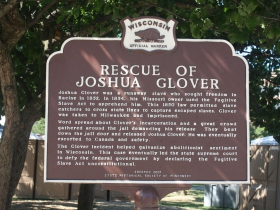 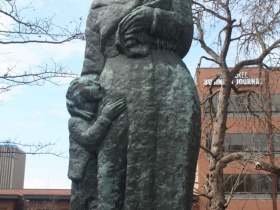 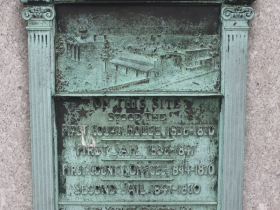 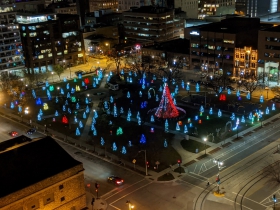 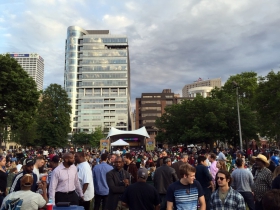 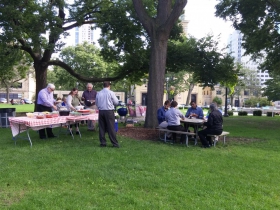 One thought on “The Curious History of Cathedral Square”