The most visible signs of an active real estate market in Milwaukee are the tower cranes hovering over the Northwestern Mutual Tower and Commons and 833 East sites. There’s no doubt these two massive construction projects in downtown Milwaukee will change the city’s skyline, but those are only a part of the ongoing real estate story.

The Lower East Side, which year after year sees the strongest development pressures in the city, is still going strong with 238 units under construction, and an additional 39 in Murray Hill (greater East Side).

Although no new residential buildings are rising in the ever-popular Historic Third Ward, there are three small warehouse-conversion projects which total up to 49 units under construction.

And the neighborhood that is always on Milwaukee’s next boom neighborhood list, Walker’s Point, has 240 units spread over three projects currently under construction.

Just north of downtown, Milwaukee’s newest neighborhood, The Brewery, has 250 units split between new construction and conversions currently under construction. Gorman & Company‘s 100-unit Frederick Lofts is slated to open this year, while Building 29 is being converted into 150 student apartments.

But the surprise of the data is Westown. This neighborhood which traditionally trails behind in the new residential development race is seeing multiple redevelopment projects that will bring 400 new units to the neighborhood, more than any of the other near downtown neighborhoods.

One Westown project of particular interest due to its prominent location along W. Wisconsin Ave. and the number of units its bringing to the neighborhood is HKS Holdings LLC’s redevelopment of the Posner Building. Located at the corner 152 W. Wisconsin Ave. the former owner Johnny Vassallo had for years attempted to convert it into a hotel, but never found the right deal (I always thought Mo’ Tel Milwaukee would have been the perfect name) and in 2014 sold the property to HKS. But Vassallo isn’t gone from the street some called “MoTown”: Mo’s Irish Pub will remain as a first floor tenant in the Posner Building, across the street Mo’s A Place for Steaks,  and in a collaboration with his brother Jamie Vassallo, Johnny plans to open Pomodoro Pizzeria & Pub in another first-floor space, the former home of Mo’s Cucina, in the Posner Building. (Hm. Maybe the new restaurant’s name should be PoMOdoro.)

You can track these and other construction projects in our Building’s database system here. 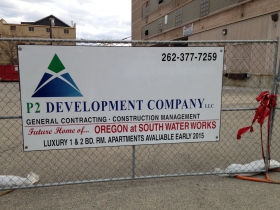 More on the Way

Along the lakefront in downtown Milwaukee, the 44-story skyscraper The Couture could add 294 more luxury units to the mix, if the the land isn’t ruled undevelopable. A lawsuit brought by Preserve our Parks against Milwaukee County and the city argues the Transit Center site, where The Couture is to be built, is on former lakebed and can’t be developed. This same dispute could impact land the Wisconsin Department of Transportation is clearing through a re-arrangement of the Lake Interchange and which Johnson Controls is looking at as a possible expansion site.

In a story for the Business Journal, Sean Ryan reports that Wisconsin DOT has asked to join the lawsuit, with the city and county, as it would impact their ability to sell the 2.66 acres of land being opened up by the interchange reconfiguration. At the Wednesday meeting of the Zoning, Neighborhoods & Development Committee a $250,000 grant which will be used to fund a study to determine if the site could be used for expansion was unanimously approved by the committee. The study will cost $500,000, with JCI picking up the other half.

Also reviewed at the ZND committee was both the $3.9 million RiverWalk tax incremental financing proposal and the Detailed Planned Development (the zoning) for the 243-unit, $40 million first phase of the River House development along the Milwaukee River on Milwaukee’s Lower East Side. Both files were unanimously approved by the committee. These items still need approval by the Common Council and the Mayor, but if all goes as planned construction could start in June.

In the soon-to-break ground category, on May 27, Andrew Weiland, of the Biztimes, tweeted:

I spoke to @TimGokhman yesterday. He said construction for Rhythm apts on Water St. and for Walker’s Point apts will begin in about 2 weeks.

This would bring an additional 140 units to the Lower East Side at The Rhythm and 120 more units to Walker’s Point.

-Although construction has yet to start on the downtown Westin hotel, planned to be built near the intersection of N. Van Buren and E. Michigan street next to the US Bank Center, the Starwood Hotels website lists a February 2017 opening date.

-According to Jackson Street Holdings LLC’s website, a new Marriott hotel is scheduled to open in downtown Milwaukee in 2016. Jackson Street will convert the six-story Commerce Building, located at 744 N. 4th St., into a 150-room SpringHill Suites by Marriott.

-And in arena news, this May 28 tweet by Weiland suggests the Bucks think the deal is nearly done:

A crew from @GESTRA_Inc is doing soil boring tests today at the new arena site in downtown Milwaukee. pic.twitter.com/3vQDs4Cymr — Andrew Weiland (@AndrewWeiland) May 28, 2015

There’s almost no way the team’s owners would have approved the tests earlier, not while they (and the the NBA) were dangling the possibility that the franchise could move to another city.