Can the city upgrade and improve its design? First story in a new series.

This is the first installment of a column by new Milwaukeean Rachel Quednau. As part of her exploration of Milwaukee, Rachel will be exploring how the city can take better advantage of its many significant intersections.

Located at the convergence of the Lower East Side, Riverwest, and the Beerline, the four-way corner of N. Water St. (E. Kane Pl. to the east) and N. Humboldt Ave. is a very important intersection in Milwaukee. It is also a space in transition, and has the potential to experience a lot more change in the next few years. It’s currently home to a mix of big, contemporary apartment buildings and older houses, as well as BelAir Cantina, the popular taco spot, Finks, a craft cocktail and beer lounge, and Greek Village Gyros. Just up the diagonal Pulaski St. is the famous Wolski’s Tavern and just south on Water Street is Brochach Irish Pub, soon to become the Red Lion Pub. 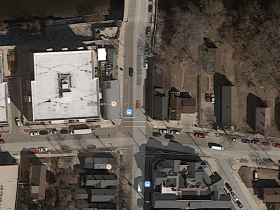 The intersection of N. Humboldt Ave. and N. Water St. (and E. Kane Pl.) on Milwaukee’s Lower East Side. Image from Google Maps.

Perhaps most important, this corner is on the Milwaukee River, and while the new apartment complexes are slowly encroaching upon that view, I think there’s still a chance to save it, and benefit residents and river lovers.

This area’s architectural character—once made up of modest homes and casual neighborhood bars like the now-shuttered Tasting Room—is overshadowed by these massive, boxy, identical structures that loom over the river. Meanwhile, many of the older buildings are in disrepair or even empty, creating a less-than-ideal juxtaposition between the new and more historic places. However, the apartments also usher in business and vitality. As Mario Lanza, a bartender who has served at Finks and BelAir for some years, puts it: “It’s brought a lot of young, successful couples to the neighborhood.” Indeed, during my Saturday afternoon observing this corner, a majority of the people I saw were young, either pushing strollers, riding Bublrs or walking their dogs. Lanza, unsurprisingly, says this influx of people has been “awesome” for business.

So what’s working well on this corner? First, the streets are alive with pedestrians and bikers. One reason for this is the well-placed and actually obeyed crosswalks on the surrounding streets, which make it safe for walkers and bikers to get where they need to go. That is a welcome change in a city where the majority of neighborhoods are filled with speeding drivers who appear to have selective blindness when it comes to crosswalk signs. The many parked cars along Water and Humboldt (east of the bridge) also contribute to pedestrian safety by decreasing the width (or perceived width) of the street for cars, who slow down to compensate.

Another upside to this corner is that both BelAir and Greek Village provide high-quality, reasonably-priced food for neighborhood residents. In fact, both businesses have developed enough of a reputation to draw customers from well outside the immediate area. I spoke with George Dimitropolous, who opened Greek Village on the corner two years ago with his wife, and he said their business consistently sees customers from throughout the surrounding neighborhood. The corner, in short, has become a destination.

Finally, the good news is you don’t need to shell out $300,000 to live here in a fancy condo with a yoga studio and a rooftop garden—unless that’s your style. You can just walk just a ways up the block and find a far more affordable duplex. Either way, you’ll be in an accessible neighborhood, rich with resources.

Because this corner is such a prominent interchange, it has lots of auto traffic. The stoplight at this corner is vital to pedestrian and bike safety. Without it, cars would inevitably speed straight down Humboldt all the way from Brady Street and across the bridge, gathering speed by the block. That being said, there’s still lots of traffic noise, including cars slamming on their brakes. While residents seem to tolerate it, the car noise and exhaust definitely make it less pleasant for sidewalk strolling or dining.

Also, the rows of new apartment complexes which flank both sides of the river create something of a dividing line between Riverwest and the Lower East Side. I did not see many people walk or bike across from the west side of the river to frequent any of these businesses on the east side, nor did I see anyone get off the #10 bus coming from the west side, despite the stop being right on the corner.

Last, the river view on this corner should be better highlighted and utilized. Only BelAir’s back patio seems to capitalize on a small slice of it. Furthermore, what little view there was, is now blocked from pedestrian sight lines by the new apartment buildings.

With a few empty lots and buildings, this corner is ripe for small business growth. The Tasting Room, “considered the first bar with an understanding of micro-brews and odd imports” and also a once-popular music venue closed several years ago, but the building still sits vacant, with the old sign still up. No word on what the owner plans to do with it, but there’s potential in that space. Finks, the other bar on the corner, actually sprang up when the previous bar on that same lot shut down. The owners of BelAir Cantina wanted a place for their customers to grab a drink while waiting for a table, so they bought the building and turned it into Finks. It stands to reason that other businesses could offer similar options for hungry diners or drinkers who frequent this corner.

In order to slow traffic and maintain the residential feel of this neighborhood, a bike corral could be installed easily near the intersection, ideally on Humboldt. Not only would this help calm traffic, it would also encourage people to bike to these local businesses, or bike to the river to see the view. BelAir currently has a small bike rack on the side of its building, but a public one would serve the neighborhood much better. Bublrs might also be a good fit here.

Another nice addition to the corner would be a rooftop bar added onto one of the nearby buildings. It seems quite likely to draw customers.

In addition, improving riverwalk access be an incredible boon to this space, as the number of bikers and pedestrians attests to a strong existing desire to be near the river. There is a riverwalk west/north side of the river, which will be extended with the new Walker’s Landing apartments. However, the small segment of the riverwalk system in place just north of the intersection is largely hidden from the street, under a seemingly never ending repair effort, and disconnected from the rest of the system. That’s a huge missed opportunity. If a new restaurant were to open in The Tasting Room’s space, that would be a prime opportunity to create back patio seating that might also link to the riverwalk system.

Clearly, the river is not being used and viewed to nearly the degree it could be, and there’s still time to highlight what is arguably the neighborhood’s most important asset before it gets completely overwhelmed by bulky apartment buildings. Not only would this improve business for local restaurants and create a more enjoyable dining experience for customers, it would also turn this corner into a more vibrant, active neighborhood for the people who live here. This intersection can and should be one of the city’s urban jewels. 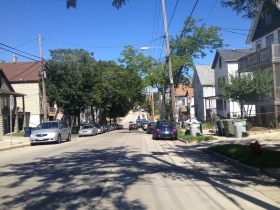 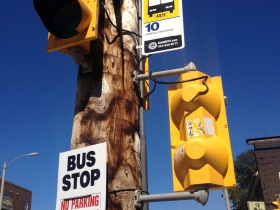 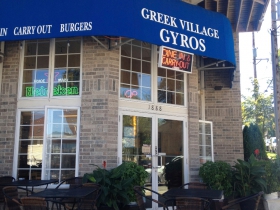 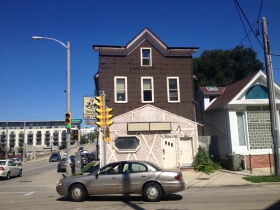 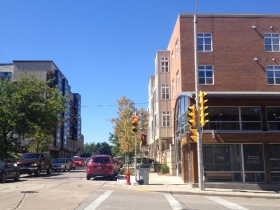 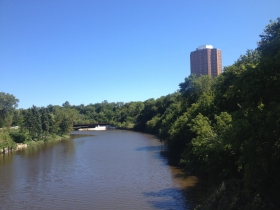