Development, traffic growing, creating a cluster jam. How to improve it. 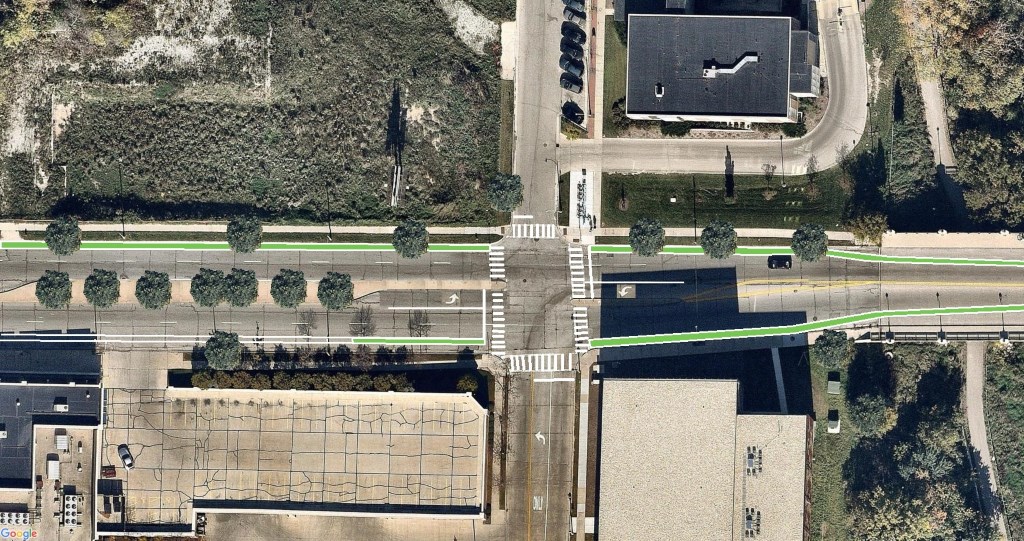 The meeting of Commerce and North — just east of Humboldt Ave. — is one of the busiest un-signalized intersections in the city. The number of issues presented by this important intersection convince me it merits some review and revision by the city. North Avenue is a primary east-west corridor which runs west from Lake Michigan across the entire length of the city. It is a busy street at nearly all hours and according to WISDOT, it carries over 30,000 vehicles a day. Commerce Street, meanwhile, has over the course of the last 20 years transformed from dormancy to being lined with hundreds of apartments and condominiums and many thousands of new daily users. Despite the significant amounts of development that have occurred around Commerce and North, the intersection has not been retrofitted to account for those changes.

Commerce and North is a victim of its success – an increasingly busy intersection in a booming part of town. In 2008 UW-Milwaukee added hundreds of new beds with the construction of the RiverView dorm on Commerce, just north of North Ave. In 2016 Mandel Group added the Belay Apartments and Adventure Rock Climbing Gym just across the street on Commerce but south of North Ave. The gym has become an almost instant success and with it brought hundreds of visitors coming by foot, bike and car. The intersection also borders a large shopping complex anchored by Pick’n’Save. There is a large vacant lot on the northwest corner of the intersection but as the neighborhood continues to develop, one must imagine that dormant plans for apartments on the site may soon be revived. The growing amount of all forms of traffic is a testament to the increasing significance of this part of the city.

Commerce Street has seen a continuous growth in traffic and population since its construction in the 1980s. The North Avenue corridor has also seen an explosive amount of development and adjoining growth of car, bike and pedestrian traffic. The North Avenue Bridge — one of a limited number of Milwaukee River crossings in the upper part the river — should have a designated and safe lane for bikes as it does for cars and pedestrians. Right now cars crossing the bridge are strained to make a left turn onto Commerce or into the RiverView dorm cul-du-sac. Cars coming northbound on Commerce Street often struggle to make a left or a right onto North as they not only have to navigate through traffic on North but they also those drivers turning left off of North. Pedestrians are also at risk crossing the street where drivers routinely speed and visibility is poor. Speeding is an ongoing problem that is worsened by the fact there is a space of nearly a third of a mile between traffic signals. At the moment there is a marked but uncontrolled crosswalk which leaves pedestrians unsure about right of way and at risk of accidents.

(1) Signalize the intersection so as to create a routine flow of traffic and reduce congestion on Commerce Street. Signalization would also improve safety dramatically for pedestrians trying to cross North Avenue by providing a predictable crossing. Predictability is a key to traffic safety.

(2) Install high visibility crosswalks to enhance the visibility of pedestrians and bikes trying to cross the intersection and install new stop lines to improve crosswalk visibility.

(3) Add a designated left-turn lane on North Avenue heading eastbound to ease turns into the dorm and what will likely be another multi-family housing development at some point in the future. The left-turn lanes should be signalized so as to provide a predictable left-turn opportunity and to reduce the chance of left-turn crashes.

(4) Add a painted bike lane on North Avenue to accommodate the existing bike traffic and to improve the visibility of bikers and possibly add flexible delineators so as to provide a buffer between bicyclists and drivers.

(5) To improve the aesthetic of this intersection, widen the existing median on North Avenue west of the intersection and add shade trees and bioswales.

(6) Tactile pedestrian ramps should be installed at all corners and median crossings as well so as to comply with ADA regulations and provide warning to disabled walkers that they are approaching an intersection. And pedestrian crossing signals should also have timers on them so as to let pedestrians and bikes know how long they have to cross.

With these changes, the resulting intersection should be a safer and more convenient experience for all who pass through. 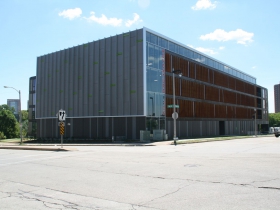 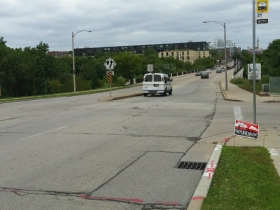 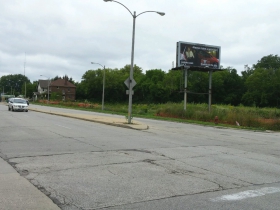 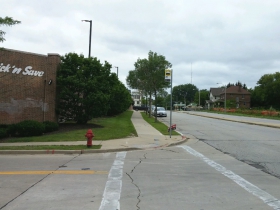 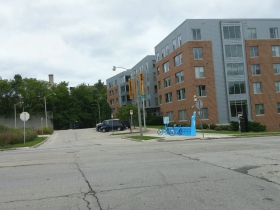 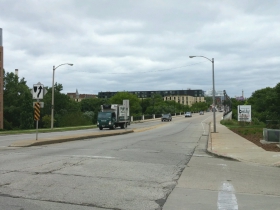