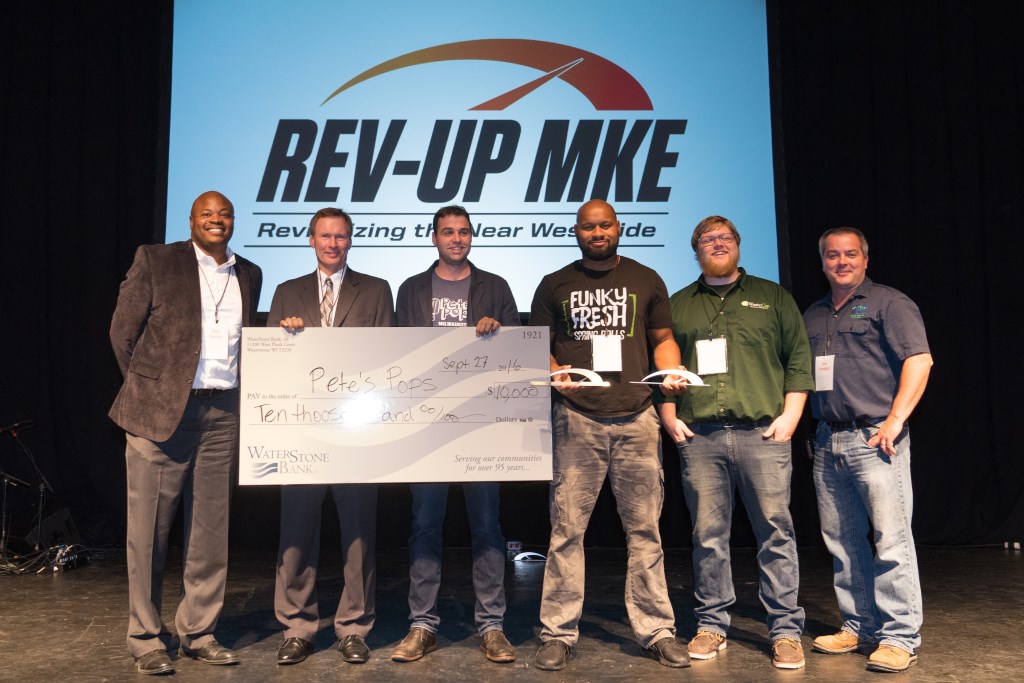 MILWAUKEE – Near West Side Partners, Inc. (NWSP) today announced that Pete’s Pops has been named the winner of the inaugural Rev-Up MKE small business competition, and will locate their business in an empty storefront in the Near West Side. The winner was announced on Tuesday, September 27, 2016, at the conclusion of a “Shark Tank”-style live pitch event in which all eight finalists presented before a unique panel of judges and the public at The Rave. In addition, Funky Fresh Spring Rolls was named as the runner-up and recipient of $4,000 in start-up finds and they were named the “WaterStone Audience Choice” and will receive an additional $1,000 to support their growth. In addition, Doug Gordon, CEO of Waterstone Bank announced they would provide $2,000 to a third place contestant, naming WasteCap Resource Solutions/Milwaukee Community Service Corps.

“Pete’s Pops will now join the ranks of some of the world’s greatest start-ups located in the Near West Side – startups that are now recognized iconic brands like Harley-Davidson and MillerCoors,” said Keith Stanley, Executive Director of NWSP. “We’re excited Pete Cooney will bring more than just unique flavored popsicles to area residents and employees in our neighborhood of neighborhoods.”

“We feel Pete’s Pops is a great example of the renewed entrepreneurial endeavors taking place in the central part of our city,” said Doug Gordon, CEO of Waterstone Bank – a major prize contributor. “We are hoping many more business owners find success here, bringing new jobs and new vibrancy to the commercial corridors of the Near West Side.”

As part of the evening, guests enjoyed the Taste of the Near West Side, which included complimentary food samples and drinks from Near West Side restaurants, including: Five O’Clock Steakhouse, MillerCoors, Miss Katie’s Diner, Daddy’s Soul Food and Grille, Troop Café and Envoy Restaurant & Lounge, located inside the Ambassador Hotel.

Leading up to this announcement, all eight finalists have been participating in hands-on business training, with technical assistance and mentorship from a number of organizations in Milwaukee, including: WWBIC, BizStarts, and the Marquette Law and Entrepreneurship Clinic.

“We were thrilled to have such a great group of finalists, who have done tremendous work to prepare for the live-pitch event,” said Kelsey Otero, Associate Director of Social Innovation at Marquette University and Rev-Up MKE organizer. “We know that each and every one of our finalists would be a great addition to the Near West Side and wish all of them great success.”

Pete’s Pops will receive significant resources to support his venture, which will be located in a Near West Side storefront, including:

Judges from the event included:

“The Near West Side has been home to some of Milwaukee’s greatest entrepreneurs – from William Harley and Arthur Davidson to Fredrick Miller, said Paul Jones, Vice President – Strategy & Sustainability for Harley-Davidson. “We are proud to welcome and support the next generation of entrepreneurs in the Near West Side.”

For more information about the competition and photos from the event, visit us online at: www.nearwestsidemke.org/revupmke/ 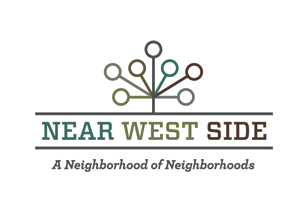