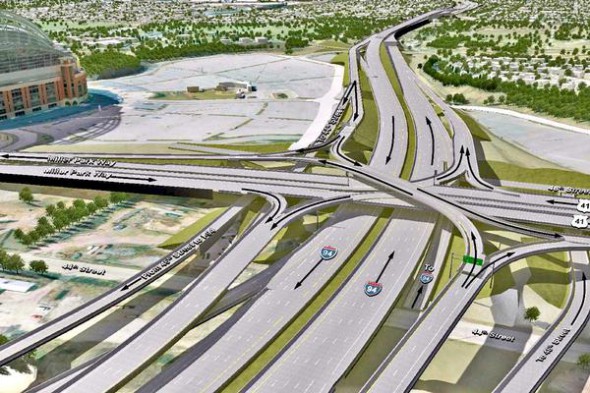 Milwaukee – The Wisconsin Department of Transportation (WISDOT) today issued a draft Environmental Impact Statement (EIS) that proposes two costly options for expanding I-94 in Milwaukee. The study ignores community opposition to the expansion and concerns over detrimental local impacts of the expansion.  The EIS also disregards data showing that traffic volumes in the corridor are declining and which call into question the need for expanding the interstate.

“Governor Walker and the Wisconsin DOT are proposing to spend over $1.1 billion on a highly questionable highway expansion when local roads and potholes are being neglected, over a thousand bridges remain structurally deficient, and other more deserving projects are ignored,” said Juan Carlos Ruiz, Chair of the Cleaner Milwaukee Coalition and a member of the Coalition for More Responsible Transportation.  “We should repair, not expand the highway. We should focus on fixing local potholes and local roads, and giving the community more options.”

“It’s time for state leaders to make responsible transportation decisions,” said Bruce Speight, WISPIRG Director.  “Rather than squander tax dollars on overbuilding highways, let’s prioritize the repair and maintenance of our existing infrastructure and the transit and bike improvements that we need to compete in the 21st century.”

The Coalition for More Responsible Transportation (CMRT) was formed to challenge the overbuilding of highways in Wisconsin while our local roads and transit systems suffer.  CMRT supports the repair of I-94, but is opposed to the expansion of I-94 and is calling on state leaders to get Wisconsin’s transportation priorities straight.